Eugene Allen, the man who inspired “Lee Daniels’ The Butler,” is pictured in this 2006 photo from the 126th anniversary program of his church’s usher board. He is the farthest left person in the third row from the front. Photo courtesy of Greater First Baptist Church in Washington, D.C.

Click here to view a photo slideshow of The Greater First Baptist Church in Washington, D.C.

WASHINGTON (RNS) Eugene Allen served eight presidents as a White House butler, and his legendary career is the inspiration for “Lee Daniels’ The Butler,” a film starring Oprah Winfrey, Jane Fonda and a host of A-list Hollywood talent.

But members of The Greater First Baptist Church knew the man who died in 2010 by other titles: usher, trustee, and a humble man of quiet faith. 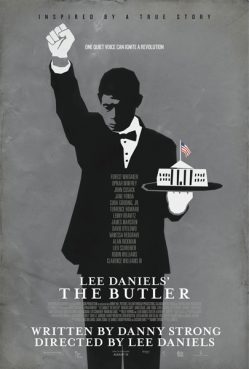 A movie poster for Lee Daniels’ “The Butler”. Photo courtesy The Weinstein Company

Those qualities were both external — black suits and white gloves — and internal — a dignified, soft-spoken manner.

On a recent Sunday, parishioners recalled Allen as a peacemaker, someone who never raised his voice.

His devotion to service extended far beyond the public and private rooms of the White House to the doorways and kitchen of his church. In African-American churches, the usher is a special role bestowed on highly regarded members. Allen joined others to open doors to visitors and pass out fans and offering plates. He also would roll up his sleeves and help prepare fish and chicken at church fundraising dinners.

“He was not only a servant there,” the Rev. Robert Hood, an associate minister, said of Allen’s White House work. “But he was also a servant doing the work of the Lord.”

The movie hits theaters on Friday (Aug. 16) with Allen portrayed as the fictional Cecil Gaines (Forest Whitaker), married to Gloria (Winfrey). The movie spans his personal journey from segregation to integration, during which he tended to keep his mouth shut about the goings-on inside the White House as well as the civil rights struggles roiling the nation.

Church members recalled that Allen, like the fictional Cecil Gaines, was fairly reticent.

“He loved that job, was committed to it,” said fellow trustee Dolores Couser of his White House job serving eight presidents. “But he never really would discuss anything other than to say he loved his work and he enjoyed each and every one of them.”

The writer of the four-page obituary in Allen’s funeral program, however, gained some insights into his thoughts about working with U.S. presidents:

Allen acknowledged that he was especially fond of the Reagans, who invited him — in real life and in the movie — to a state dinner before he retired in 1986. “He often talked about how nice they were to him,” recalled church member Marion Washington, who knew Allen when he was promoted to maitre d’.

Terrence Howard and Oprah Winfrey in a scene from “Lee Daniels’ ‘The Butler.'” Photo courtesy The Weinstein Company

In the movie, Cecil and Gloria Gaines are portrayed as a Christian couple, with a crucifix over their bed and a devotion to the Bible.

Director Lee Daniels, a Philadelphia native who grew up in the oldest black Episcopal church in the country, said it was important for the movie to include religious elements. He fought to include a scene depicting a church fundraiser for the Freedom Riders in which a choir sings “Woke Up This Morning With My Mind Stayed On Freedom.”

“You can’t tell a story about the civil rights movement without the gospel and gospel music,” he said. “You just simply can’t. It’s impossible.”

Wil Haygood, who wrote the 2008 Washington Post story that first brought Allen’s story to light, said it was more than chance that allowed him to bring public attention to Allen’s otherwise private career.

“There was a higher force that led me to Mr. Allen’s front door,” said Haygood, who made dozens of calls before tracking down Allen. “He had a landline. If he would have had a cell phone I would have never found him.”

Now, he said, after Allen worked quietly behind the scenes while presidents from Truman to Reagan were in the limelight, the roles are reversed.

“To me, in a way, it’s almost biblical: The last shall be first,” said Haygood. “He’s not working in the White House theater, serving popcorn. He’s the star on the big screen.”