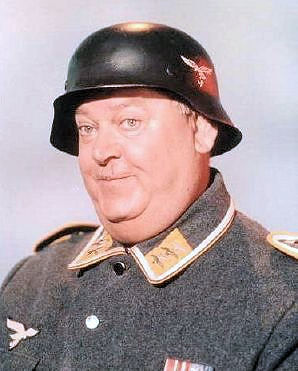 In the latest chapter of the John J. Myers story, our hero does his best Sgt. Schultz imitation. As in: “I see nothing. I was not here. I did not even get up this morning.” That’s the gist of the what Myers had to say when deposed three years ago regarding accusations that Msgr. Thomas Maloney had sexually abused a series of children in the Diocese of Peoria during the time that Myers was climbing the greasy pole there.

Here’s a bit of His Excellency’s colloquy with Attorney Jeff Anderson, representing the plaintiff in the case.

Now, with Myers sitting halfway across the country as archbishop of Newark, Peoria has settled the case by forking $1.35 million over to the 25-year-old plaintiff, Andrew Ward, who claims Maloney abused him when he was eight. Public release of Myers’ deposition was part of the settlement — and you figure the guys holding the bag in Peoria were not unhappy to let the world see their former bishop in action. As we’ve learned from the Fugee case, passing the buck is Myers’ style.

Not that the archbishop hid the fact that he and Maloney were buds. “I called him Tommy and he called me Johnny,” he said. Was Maloney “kind of an intimidating figure as a priest?” asked Anderson. “No,” Myers replied. “He was kind of an Irish leprechaun.”

The leprechaun showered his friend with all kinds of gifts, including a precious camera that Myers, in a letter of November 1992, said he was “a bit squeamish” about accepting. “As usual, your spontaneous generosity is too much,” he wrote. To be sure, in the deposition he says that he does not remember being given the camera.

Nor does does he remember “the silver” Maloney gave him in March of that year. “That one is even too big for a watch fob,” he wrote in his thank-you note. “It could be tied around one’s neck like the proverbial ‘millstone.'”

Thinking of Jesus’ proverbial millstone in Matthew, Mark, and Luke, Anderson asks Myers, “Do you remember the biblical verse that refers to whoever shall violate a child shall have a millstone hung from their neck?”

“I’m sure,” replied the archbishop, “that had no reference to that.”