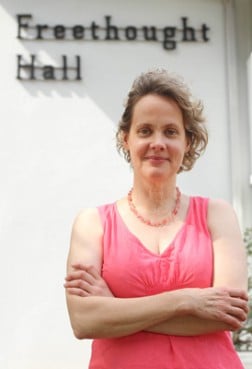 Annie Laurie Gaylor is co-president of the Wisconsin-based Freedom from Religion Foundation, one of the few atheist/freethought organizations staffed by a majority of women. The federal government wants to give Gaylor a tax break for leading the atheist group. RNS photo by Amber Arnold

(RNS) The federal government wants to give Annie Laurie Gaylor a tax break for leading the Freedom from Religion Foundation.

But Gaylor, an outspoken atheist from Madison, Wisc., wants to stop them — and she’s asking a federal judge for help.

The standoff is the latest twist in a court battle over the parsonage exemption for clergy, a tax break that allows “ministers of the gospel” to claim part of their salary as a tax-free housing allowance.

But government lawyers say that atheist leaders can be ministers, too, since atheism can function as a religion. So leaders of an atheist organization may qualify for the exemption.

No thanks, Gaylor said.

“We are not ministers,” she said. “We are having to tell the government the obvious: We are not a church.”

The legal status of the parsonage exemption has been challenged for more than a decade ever since a dispute between the IRS and the Rev. Rick Warren of Saddleback Church in California.

In 2002, the IRS tried to charge Warren back taxes after he claimed a housing allowance of more than $70,000. The dispute landed in federal court and eventually Congress intervened by clarifying the rules for the housing allowance.

The allowance now is limited to either the fair market rental value of the house or the money actually spent on housing. Clergy can claim the tax break for only one house.

Critics of the housing allowance say it is unfair to the general public. They pay more because clergy pay less.

Defenders of the allowance point out that most ministers and other clergy are considered self-employed and so pay higher tax rates than other workers. The tax allowance helps balance that out.

Gaylor, and her husband, Dan Barker, want the allowance eliminated. Their legal battle with the government over the exemption has been part chess match and part high-stakes poker game.

The foundation first filed a suit challenging the exemption in 2009 in California but later dropped the suit because of concerns about whether it had legal standing in the state. It re-filed the suit in Wisconsin in 2011, and in late August 2012 a federal judge ruled that suit could go forward.

The case is simple: The foundation board voted to give both Gaylor and Barker a housing allowance of $15,000 a year. But the couple says they can’t claim that as tax-free income since they are not clergy.

In a brief, the Justice Department argued that leaders of an atheist group may qualify for an exemption. Buddhism or Taosim don’t include a belief in God and are considered religions, the government’s lawyers argued, so why not atheism?

The Internal Revenue Service does require, among other things, that a “minister” be seen as a spiritual leader and provide services for a religious organization. Belief in a deity is not required.

“Plaintiffs may not presume that a law’s reference to religion necessarily excludes beliefs that are specifically non-theistic in nature,” the government argued in a motion to dismiss the suit.

Larry Crain, president of the Brentwood, Tenn.-based Church Law Institute and a longtime First Amendment lawyer, said the government might be right.

“They make an interesting point,” he said. “If they (atheist foundation officials) apply for the exemption, they might get it.”

But the government’s argument misses the point, Gaylor said. She’s not filed a tax return claiming the allowance and doesn’t know if she would accept one if the government allowed it.

“That’s not what we are after,” she said.

The foundation also is suing the government over several nonprofit laws that govern churches. They want government to enforce rules that ban pastors from giving political endorsements and to require churches to file the same Form 990 tax returns as other charities.

Gaylor said the government should not give religious groups any special treatment.

But Eric Stanley, senior counsel of Scottsdale, Ariz.-based Alliance Defending Freedom, said the First Amendment does give churches and other religious groups special privileges. He said that too much government regulation of churches would interfere with religious freedom.

Stanley believes that the Justice Department has called the foundation’s bluff in the parsonage lawsuits.

“What is really going on is that they don’t like the housing allowance,” he said. “The foundation wants the government to be hostile to religion.”

Gaylor is amused by at least one part of the government’s recent legal filings. She said the parsonage allowance was first put in place in the 1920s to help ministers to fight against “godlessness.”

“They can’t now reward the Freedom From Religion Foundation to fight for godlessess,” she said.

(Bob Smietana writes for USA Today and The Tennessean.)