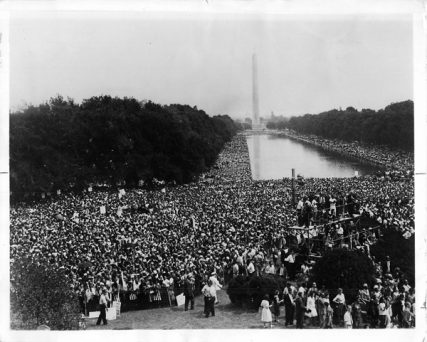 On Aug. 28, 1963, Martin Luther King, Jr. addressed the crowd gathered during the March on Washington, delivering his “I Have a Dream” speech. RNS file photo

The March on Washington, whose 50th anniversary we’re celebrating this week, was not only the climactic public event of the civil rights movement. It instilled in American religious leaders a prophetic preoccupation from which they have still not recovered.

When Martin Luther King, Jr. quoted the prophets Amos and Isaiah at the Lincoln Memorial — “we will not be satisfied until ‘justice rolls down like waters, and righteousness like a mighty stream”…”and the glory of the Lord shall be revealed and all flesh shall see it together” — it was a clarion call such as few had heard.

To be sure, American religion had hardly been absent in from the great reformist movements of the past: anti-slavery, temperance, women’s rights. But for nearly half a century, religious leaders had been relatively quiescent. The so-called Eisenhower revival was above all a time of suburban church-building, a gathering of the country’s respective flocks under the banner of, “the family that prays together, stays together.” And as King’s own “Letter from Birmingham Jail” testified, most clergy were happy to keep it that way.

But with King as prophet-leader, the March on Washington established a new and exciting role for religion in postwar America — one that in due course seized the imaginations of even those who most bitterly opposed it. For after spending much of the civil rights era attacking activist clergy for destroying “the spirituality of the church,” conservative pastors led by Jerry Falwell decided to take up the prophetic role from the other side, and the religious right was born. For over a generation, the public face of religion has been subsumed in culture wars.

As Ecclesiastes teaches, there is a time for everything, and we may finally have reached a time for the prophetic voice to quiet down. If the young papacy of Francis has shown anything, it is that this does not mean that religion has to abandon a public role. It does mean that what we now may need from religious leaders is teaching by humble example as well as by word, gentle persuasion and understanding of human weakness, and a dialing back of millenialist dreams.

Fifty years after the March on Washington, it’s time.