(RNS) Christian conservatives who think Satan is using communism and Islam to bring down America can add a new “adversary” to the list: the Emergent Church movement.

A portion of the upcoming Values Voter Summit in Washington will stray from its usual focus on politics and consider the Emergent Church as one of three “channels the adversary is using to bring America down.” Art Ally, president of The Timothy Plan, a Florida-based mutual fund company devoted to “biblically responsible investing,” will lead the breakout session.

“Why would Satan use Communism? It’s a godless form of government,” said Ally. “Why would Satan use Islam? Same reason. It’s not a religion. It’s a movement to dominate the world under the guise of religion. The Emergent Church plays right into that by weakening further our church community.”

The Emergent (or Emerging) Church was a hot topic a decade ago as authors and pastors like Brian McLaren and Tony Jones challenged churches to adapt to a postmodern culture, but the movement never organized itself well, and the debate surrounding it eventually died down. 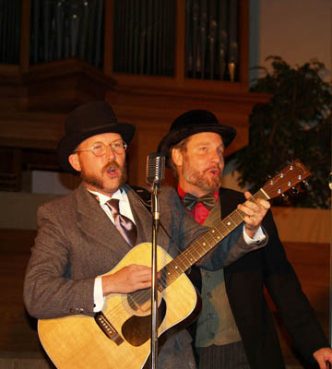 “If we had one one-thousandth of the adherence of either of communism or Islam, we’d be doing pretty well.”

Jones was surprised by the Emerging Church’s inclusion in the conference, given that the movement has largely gone under the radar.

But what Ally considers to be part of the Emergent Church might include a wider definition than what Jones and McLaren would. While hesitant to name names, Ally suggested that megachurch pastors Rick Warren, Bill Hybels and recently retired pastor John Piper could be considered emergent.

“These guys don’t even talk about sin for fear it’s driving away the postmodern generation,” Ally said. “The Emergent Church has watered down biblical Christianity to the point that John the Baptist would have been shocked.”

Many theologians, however, would likely not include Warren, Hybels and Piper in the Emergent camp. Piper, for example, has been critical of the Emergent Church, saying it is “going away from the gospel.”

Either way, the movement could be considered sputtering, said Scot McKnight, a New Testament scholar at Northern Seminary in Lombard, Ill.

“It’s an unaware perception of what’s going on in the church today,” McKnight said. “I’m thinking this is going to appeal to people who are 70 and above.”

The Timothy Plan has been featured in Christianity Today and World magazine, which called it the “granddaddy of evangelical investment funds.”

The mutual fund company, which has a portfolio of about $700 million, avoids investing in companies that it deems contrary to Scripture. For instance, it declines to invest in Starbucks because of the company’s stance on gay rights.

A spokesman for FRC said that those who sponsor breakout panels choose their own content.

In 2007, the summit hosted a debate between Sojourners founder Jim Wallis and Richard Land, then-president of the Southern Baptists’ Ethics and Religious Commission, but it has generally strayed away from theological debates.

“Aspects of Emergent have become popular in Mainline Protestantism, and more regularized in pockets of evangelicalism,” said Daniel Treier, a theology professor at Wheaton College outside Chicago. “I would speculate that the Values Voters are up in arms because of some prominent Emergent tensions over sexual ethics, its general aversion to right-wing culture wars, and thus its perceived tendency to go Democrat.”