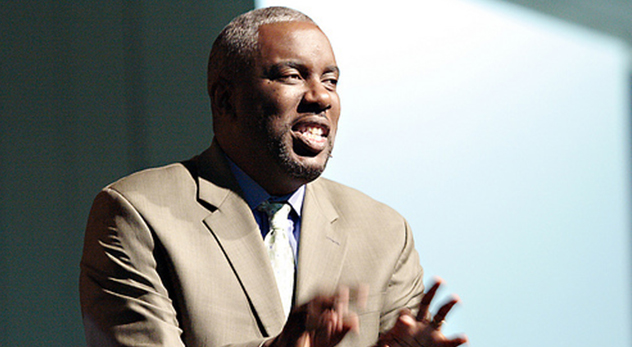 A blog post by a prominent Christian author and pastor provokes widespread response. Here are three things the article can teach us.

Christians need to relearn how to gag at all those gays and their yucky behavior.

This isn’t the assertion of a child; it’s a serious argument by a reputable Christian thinker.

Author and pastor Thabiti Anyabwile wrote an article last week on his blog at The Gospel Coalition (TGC) titled, “The Importance of Your Gag Reflex When Discussing Homosexuality and ‘Gay Marriage.’” In it, he argues that Christians need to “remove the ‘yuck factor’ in the gay marriage debate and that “it would be a good thing if more people were gagging on the reality of the sexual behavior that is now becoming public law, protected, and even promoted in public schools.”

Not surprisingly, Anyabwile’s remarks provoked an immediate reaction across the twittersphere and blogosphere—not just from angry gay rights activists but from his fellow conservative Christians as well. The protests were so sharp that that he was forced to offer a response and apology.

“I regret using ‘gag reflex’ as shorthand for the conscience’s reaction….” Anyabwile said. “For writing in this way, I offer my sincerest apology to every reader, not just those hurt.”

The problems with his original post are legion, and I was among those who expressed outrage that a reputable blog community like TGC would allow it to remain on their site. Yet as my blood pressure returned to normal levels, I’ve realized that there are at least three things I learned from Anyabwile’s gay rant.

1. Many Christians need to get out more. Anyabwile’s rhetoric is the kind of thing that has driven the church into a moment where we are hemorrhaging from the inside (failing to win our own families to the faith) and repelling people from the outside (failing to win new converts). But it is also a sign that we are still battling the remnants of the cultural separatism that plagued late 20th century evangelicalism.

Following the cultural revolution of the 1960s, many conservative Christians saw culture as an evil that should be avoided at all costs. As a result, they began retreating into manufactured Christian fortresses where they hoped to evade all those nasty sinners around them.

In the 1970s and 1980s, many began buying Christian books printed by newly formed Christian book publishers and sold in newly opened Christian bookstores. They wore Christian T-shirts and watched Christian movies and attended Christian schools. They were trying to stiff-arm culture in an effort to be holy, and to some extent it worked. But growing American pluralism and the advances of the digital age soon made such efforts nearly impossible. As a result, cultural separatism has given way to new kinds of thinking about how Christians should engage and influence the world around them.

But the remnants of this paradigm linger among many, particularly among Reformed Christians (of which Thabiti and TGC are a part). Many of my Reformed friends only read books by, follow blogs of, hang out with, and attend churches pastored by those who hold their theological perspectives. They are careful never to publicly criticize or challenge the self-appointed leaders of the movement. I recently visited a friend who is also a blogger for TGC. Sitting in his office, he commented on how “widely read” he has become. Surveying his bookshelves out of the corner of my eye, I couldn’t understand what he meant. Perhaps to him having N.T. Wright and John Piper on the same shelf is a sign of literary diversity.

One of the telltale signs that one has grown too culturally insular is the way one talks about those outside of the faith community. When we feel the need to tell those outside of the community that we can’t help gagging at their yuckiness, it probably means we need to spend more time actually getting to know them. Those who self-segregate into Christian echo-chambers often talk about “sinners” in ways they would never talk to them.

Christians can’t be salt and light if they’re constantly gagging at the meat and darkness around them.

2. Christians love playing the victim. Given our history, it isn’t altogether surprising that Christians love a good martyr. But the way American Christians play the victim is sometimes so breathtaking that I fail to find the words for a proper response. Nothing is more confounding, if not comical, than when Christians—who make up 80% of the country—decry their “persecution.”

“The response [to the first article] isn’t altogether surprising,” Anyabwile wrote. “It’s representative of the climate and world we live in. As many evangelical leaders have pointed out, we’re at the point now where there’s no longer any dispassionate position on homosexuality.”

When I was in third grade, a bully in my neighborhood punched me in the nose. My older brother promptly gave him a black eye in return. The bully then ran back to his house and complained to his mother that he’d been assaulted by the Merritt clan. Perhaps you’re beginning to see where I am going: If you tell someone that they are yucky and make you want to throw up, you can’t exactly pretend to be a victim of a culture of persecution when your words evoke a nasty response. It doesn’t take a tarot-card-reading psychic to predict the response such comments will garner.

Wise King Solomon once remarked, “Whoever digs a pit will fall into it; if someone rolls a stone, it will roll back on them.”

Christians who decide to throw stones of strong language in public forums must stop playing the victim when they get pelted in return. Such responses makes Christians look like whiney bullies who can’t take what they dish out. If we want to engage others in intelligent, respectful discussion about our beliefs, we need to begin speaking in intelligent, respectful ways.

“Nowadays, many of the victims have become the bullies,” Anyabwile protested.

The opposite is also true.

3. Our gag reflexes are instructive. Anyabwile’s assertion that our gag reflexes are instructive is correct, though not perhaps in the way he believes. When I read the gospels, I find Jesus didn’t have much of a gag reflex when it came to “sinners.” Whether it was a scandalous encounter with a promiscuous Samaritan woman or a contentious argument over what to do with an adulterer who had been caught in the act, Jesus wasn’t repelled by but rather drawn to them. Meanwhile, the Pharisees were in the corner dry heaving.

Of course, Jesus did find himself nauseated on one or two occasions, but the source of his nausea was not those the religious community deemed sinful. It was the religious aristocracy itself. Jesus gagged at the gaggers. He was sickened by the sickened. It does us good to be reminded that Jesus was repulsed as much by self-righteousness as unrighteousness.

Whenever I find myself gagging, it is a reminder of my own yuckiness, not other’s. That queasiness is often a sign that I’ve strayed from the way of Jesus and have begun plodding the path of the Pharisee. When I smell the stench of urine seeping off a homeless alcoholic and my stomach begins to quiver or when my lunch curdles at the sight of a single mother who works at a strip club to feed her child, my gag reflex reminds me of my own yuckiness, my own tendency toward self-righteousness.

None will deny that Christian theology has historically held that sexual expression is not a free-for-all pursuit of pleasure, but rather something God has designed for men and women to enjoy within certain bounds. But Christians who hold to the historic Christian position must learn to defend their position with more grace, compassion, and love then they have in the past.

Christians must stop talking about others and instead start looking them in the eyes.

Christians must stop burning bridges and instead start building them.

Christians must stop lobbing rocks and instead start living by Jesus’ admonition in John 8:7: “Let he who is without yuckiness cast the first stone.”