NEW YORK (RNS) The rights of religious groups or individuals that object to same-sex marriage continue to clash with those pursued by gay rights advocates. Now, the fight that started at state ballot boxes and in courtrooms has moved to floral shops, bakeries and photo studios.

As churches are concerned about the potential of facing lawsuits, some are changing their bylaws to explicitly reflect their views on traditional man-woman marriage. 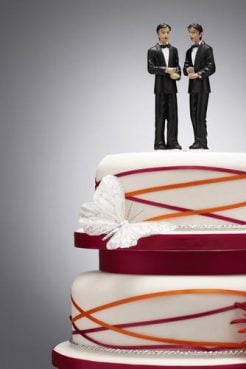 Groom figures on a wedding cake

A bakery in Gresham, Ore., owned by a Christian family, under investigation by state officials for refusing to bake a wedding cake for a lesbian couple, decided to close its doors. “This fight is not over,” they wrote on a sign in the shop window. “We will continue to stand strong. Your Religious Freedom is becoming not Free anymore.”

Last month, the New Mexico Supreme Court ruled that photographers could not refuse to shoot gay wedding ceremonies even though the state does not officially recognize gay marriage. The court ruled that declining to photograph a gay wedding was similar to declining to work at an interracial wedding, with Justice Richard Bosson saying, “There is a price, one that we all have to pay somewhere in our civic life.”

Many of the legal skirmishes are not directly tied to federal recognition of gay marriages after the Supreme Court’s decision striking down most of the Defense of Marriage Act. Instead, the fights largely revolve around state and local anti-discrimination ordinances that include protections for gays and lesbians.

Upcoming battles include whether religious opposition to same-sex marriage constitutes discrimination on the basis of sexual orientation, gender and/or marital status; and what happens when a discrimination claim bumps up against an individual’s or institution’s religious freedom.

Many cases are still being resolved:

The Supreme Court’s decision against the Defense of Marriage Act applies to federal benefits, but many have been watching to see whether it holds further implications for religious groups or individuals. For instance, employers in states where gay marriage is legal will be required to provide Family and Medical Leave Act leave to employers with same-sex spouses, even if their state doesn’t recognize same-sex marriage.

The Becket Fund for Religious Liberty, a Washington-based religious freedom law firm, notes that since DOMA was enacted in 1996, six states and Washington, D.C., have adopted same-sex marriage through the legislative process with conscience protections for those with objections to same-sex marriage.

Ahead of the court’s decision, the Becket Fund issued a brief on areas where religious freedom could be impacted by the DOMA ruling, outlining seven areas to watch:

Many religious institutions provide services beyond their congregations that are considered “public accommodation,” such as health care, counseling, child care, education, wedding facilities and adoption services.

For instance, New Jersey’s Supreme Court held that the Boy Scouts organization, which does not permit gay leaders, is a place of “public accommodation.” Some fear that a lack of explicit conscience protections could open the doors to lawsuits.

Courts in some states have required landlords to allow unmarried cohabitating couples as tenants despite the landlords’ religious objections. A federal recognition of marriage would give same-sex couples a strong standing to access housing under anti-discrimination laws.

In a 2001 case, a New York court sided with two lesbians, saying they had a valid claim of discrimination after Yeshiva University declined to provide housing benefits to unmarried couples. Now that same-sex marriage is legal in New York, a similar case could be considered marital discrimination.

Currently, 21 states and the District of Columbia prohibit discrimination on the basis of sexual orientation; most state laws include an exemption for religious organizations. A federal law to make anti-gay discrimination illegal nationwide has lagged in Congress for 20 years.

Now the question is: If a gay man or lesbian is fired for being gay, and that person’s marriage is now recognized by the federal government, does anything change? Does a federally recognized marriage offer greater protection in discrimination claims?

After the District of Columbia legalized same-sex marriage, the Catholic Archdiocese of Washington stopped offering spousal benefits to any new employees.

Access to government facilities, such as schools, parks and other spaces, could become challenging for some who oppose same-sex marriage. For instance, the Boy Scouts have lost leases to campgrounds, parks and a government building headquarters and lost the right to participate in a charitable payroll deduction program. Public university student groups could face scrutiny. The University at Buffalo suspended an InterVarsity Christian Fellowship group after it asked a gay member to step down as treasurer.

As many governments would require all state marriages to be treated equally, some worry about loss of licenses or accreditation. Many cite the case where Catholic Charities in Boston and San Francisco shut down adoption services because the agencies refused to comply with anti-discrimination laws and place children with same-sex couples.

As many religious institutions seek grants and contracts for services, some see a tension between providing services and receiving government funding. Illinois Catholic Charities shut down rather than comply with a requirement that they can no longer receive state money if they turn away same-sex couples for foster care or adoption.

Some are also concerned about the possibility of state or local tax exemption challenges, or the ability to apply for government funding. If discrimination standards apply to sexual orientation, religious school leaders fear they could be denied government programs, such as scholarships and grants.

The decision could continue to impact government workers and students at public universities.

Julea Ward, a master’s in counseling student at Eastern Michigan University, told her professors that she could not help gay and lesbian clients with their same-sex relationships. She was expelled for violating the school’s anti-discrimination policy and given $75,000 in a settlement.

At least 12 Massachusetts justices of the peace have resigned because they declined to facilitate same-sex marriages.