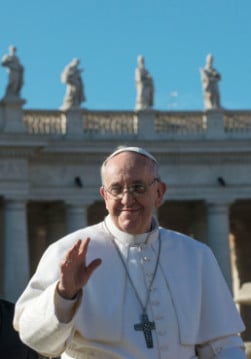 (RNS) Of all the novelties that Pope Francis has brought to the Vatican, few have endeared him to the public — and unsettled his aides — as much as his penchant for picking up the phone and calling someone out of the blue.

Now it seems “the cold-call pope,” as he has been dubbed, has done it again: he reportedly called a 35-year Italian woman who had written to him after she became pregnant and was then dumped by her fiance’, who it turned out was married with children of his own. The man also urged the woman to have an abortion.

Instead, Anna Romano wrote in desperation to Francis in July, knowing that he sometimes responds personally to the thousands of people who write to him.

On Tuesday (Sept. 3), Romano’s cell phone rang. It was Rome number she did not recognize but she answered anyway.

“Hello, Anna,” the voice on the other end of the line said, “this is Pope Francis.”

“I was petrified,” she told Il Messaggero, a Rome daily. “I recognized his voice and I knew right away that it really was the pope.”

She again recounted the story that she had written in the letter: how she was divorced with a child already, and was engaged to be married when she discovered in June that she was pregnant. That’s when her fiance’ demanded that she have an abortion.

She told him to get lost and said she was keeping the baby. But she was also feeling desperate, “betrayed, humiliated.” That’s why she wrote to Francis. On the envelope she put: “Holy Father Pope Francis, Vatican City, Rome.” No zip code, nothing else.

It was enough, apparently. The pope called her as informally as “a dear, old friend” would, Romano said, and in their conversation Francis “reassured me, telling me that the baby was a gift from God, a sign of Providence. He told me I would not be left alone.”

When Roman told the pope that she wanted to have the child baptized but was afraid she could not because she is divorced and n her own, the pope told her he was sure that she could find a willing pastor.

“But if not,” Francis added, “you know there’s always me.”

Though she doesn’t know whether she will have a girl or a boy, Romano told the newspaper she thinks it’s a boy, and it’s clear what she will name him: “Francis.”

There was no official Vatican confirmation of the story, and in fact the pope’s spokesman on Friday had to deny the claim by a gay man in France that the pontiff had personally called him to reassure him that “your homosexuality doesn’t matter.”

“There is always the risk that people pretend to be the pope over the phone,” the Rev. Federico Lombardi told Le Figaro.

But this latest episode does seem to be in keeping with Francis’ pastoral style.

While archbishop of Buenos Aires, Cardinal Jorge Bergoglio famously blasted priests who refused to baptize children born out of wedlock, calling them “today’s hypocrites” who “separate the people of God from salvation.”

Moreover, since becoming pope in March, Francis has regularly used his personal cell phone to reach out beyond the confines of the Vatican.

Right after his election, for example, the pope called his local newsstand to cancel his newspaper subscription, and he also phoned his cobbler back home to ask if he could repair the battered black shoes that Francis favors.

But he has increasingly used his phone for more pastoral purposes.

He called an Italian man who has struggled to forgive God after the murder of his brother, and he called an Italian engineering student who wrote to the pope about his fears of not finding work even with his degree. The two “laughed and joked” for eight minutes, the teen said, and Francis told the young man to use the informal “tu” with him.

In late August, the pontiff called an Argentine woman who had been raped by a local police officer and counseled her for a half hour.

The pope’s penchant for calling people has become so notable that an Italian humorist recently took to the pages of a leading Italian newspaper with a list of tongue-in-cheek etiquette tips in case Francis calls you:

“Calling him ‘Frankie,’ for instance, would be inappropriate,” Beppe Severgnini wrote.

“Exclaiming ‘Your Holiness!’ is predictable, but getting carried away with appellations such as ‘Your Magnificence’ or ‘Your Megagalacticness’ would be a little grotesque.”