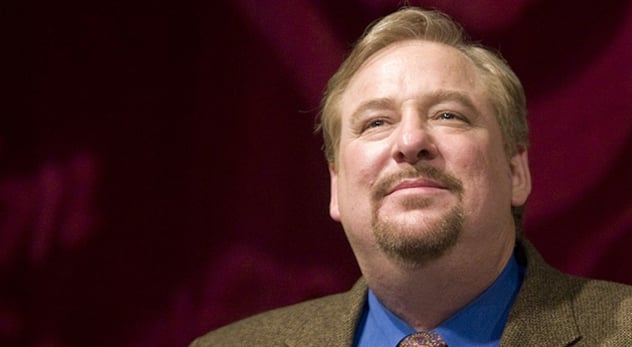 Pastor Rick Warren told CNN’s PIers Morgan that his son’s suicide will affect how he engages the issue of gun control, but what he plans to do remains a mystery.

Bestselling author and mega-church pastor Rick Warren and his wife, Kay, have been pushing Christians on social issues for the last decade. They were among the first evangelical leaders to begin championing adoption, which helped turn it into an issue of top priority among the faithful. And through their P.E.A.C.E. plan, they’ve helped mobilize evangelicals to fight AIDS, a disease many Christians believed was God’s judgment on gays and lesbians only a generation ago.

“It may actually be shorter to list causes that [Rick and Kay Warren] have not dedicated time and energy to,” CNN’s Daniel Burke wrote on Tuesday.

But after the Warren’s interview with CNN’s Piers Morgan last night about their son’s suicide and other issues, many wonder whether the religious power couple might lead a Christian movement for gun control.

This past April, Rick and Kay’s son, Matthew, committed suicide with a gun he illegally obtained online. He had attempted to purchase a gun legally several times but was rebuffed because of a red flag on his background check for having been forcibly admitted to a mental institution.

“We’re grateful that the laws kept Matthew from getting the gun for as long as it did,” Rick Warren said in the interview.

At one point, Morgan brought up Washington Navy Yard shooting, noting it as part of a “constant tidal wave” of gun violence in America.

“Now that you’ve been so personally touched and you’re in such a position of authority, is it affecting what you’re going to be saying about this going forward?” Morgan asked the pastor.

“Well yeah,” Warren responded, “I mean it’s going to affect me in all three of those areas, not simply in gun control.”

He went on to add that when he heard news of the shooting, he fell to his knees and prayed for the victims.

What exactly Warren means when he says this will affect the way he engages the issue of gun control is unclear, but this isn’t the first time he’s expressed concern on the matter. Following the Sandy Hook shooting last year, Warren said on “Fox News Sunday”:

There’s a mental health angle that you have to deal with, I don’t think we’re taking care of those struggling with mental illness like we need to in America. There is the civil safety issue, which is gun control and these assault weapons — they don’t call them ‘assault weapons’ for nothing. There is the social issue … students, by the time they’re 18, they’ve maybe killed 10,000, 20,000 people on video games without any remorse for it. It creates a culture of violence.

If the Warrens decide to engage this issue, there are some indications that much of the Christian community is poised to join them. According to an August 2012 survey by Public Religion Research Institute (PRRI), six-in-ten Catholics and religiously unaffiliated Americans (62% and 60%) favor stricter gun control laws. About 42% of mainline Protestants and 35% of white evangelicals said the same thing.

But the PRRI survey was conducted prior to the Sandy Hook tragedy that sparked a national debate on the issue. In January of this year, a non-scientific poll conducted by the National Association of Evangelicals (NAE) found that 73% of church leaders agreed there needs to be stricter gun regulations.

“Evangelicals are pro-life and deeply grieve when any weapons are used to take innocent lives,” said Leith Anderson, President of the NAE. “The evangelical leaders who responded to the NAE survey support the Second Amendment right to bear arms but also want our laws to prevent the slaughter of children.”

It’s difficult to tell exactly how many American Christians favor gun control at this moment, but one thing is for certain: If Rick and Kay Warren decide to prioritize it, we can be sure that the number—whatever it is—will grow.