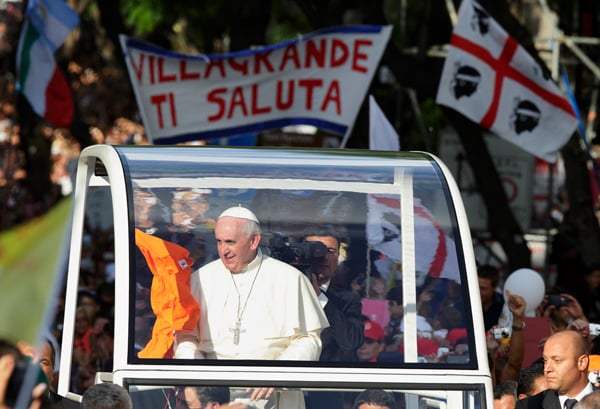 A shirt is thrown into the popemobile as Pope Francis arrives for an encounter with youth in Cagliari, Sardinia, Sept. 22. Photo by Paul Haring/courtesy Catholic News Service
September 23, 2013
Eric J. Lyman

ROME (RNS) Pope Francis criticized what he called the "idolatry of money" on Sunday (Sept. 22) in a trip to one of the poorest regions of the European Union.

The pontiff, visiting the island of Sardinia off Italy's western coast, departed from his prepared remarks to talk about his own family's struggles as Italian immigrants in Argentina. Speaking on an island where more than half of workers under 30 are unemployed, Francis told the masses: "Don't let yourselves be robbed of hope." 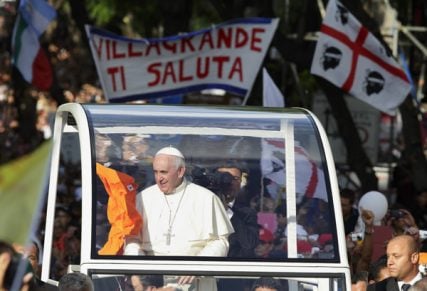 After celebrating Mass at the Sanctuary of Our Lady of Bonaria -- named for the same saint for which the pope's hometown of Buenos Aires is named -- Francis met with some of the island's poorest residents.

It was just Francis' third trip beyond Rome as pope, but it was at least the sixth time in his six-month papacy that Francis sought out the poor and destitute. His first official trip outside of Rome was to the southern Italian island of Lampedusa, where he met migrants; he's also visited a prison, a refugee center and a rehab center in Rome. Visiting Brazil for World Youth Day, he asked to go to a favela, or shantytown.

Speaking on the 60th anniversary of his decision to become a priest, Francis told the young people around him during remarks in Carlo Felice Square, "In all these years that have passed, I've had some successes and joys, but also many years of failure, fragility, and sin."