JERUSALEM (RNS) In a stunning reversal, a feminist Jewish prayer group said it will consider a government proposal to allow a mixed-gender prayer space at the Western Wall — but only after the government agrees to their conditions. 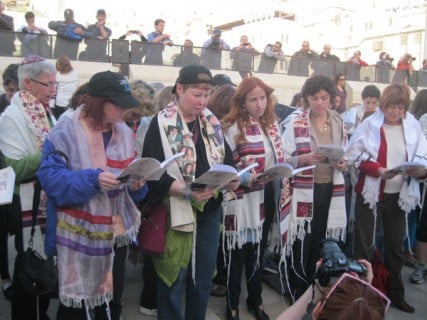 Despite a court decision stating women cannot don prayer shawls at the Western Wall, many members and supporters of Women of the Wall pray with prayer shawls. They want the Israeli government to accommodate the needs of all Jews at the Wall, not just those of the ultra-Orthodox. RNS photo by Michele Chabin

For 25 years, Women of the Wall has demanded access to pray at the sacred site that is home to the remnants of the Jewish Temple and is overseen by the Orthodox religious establishment. The group objects to the restrictions placed on them when they pray in the women’s section. They want to continue to pray in that section but will consider a compromise.

After a “comprehensive and emotionally trying decision-making process,” the group’s executive board on Monday (Oct. 7) overwhelmingly decided “to create a future in which, under the right conditions,” its members will pray “in an equal and fully integrated third section of the Kotel,” the Hebrew word for the Western Wall.

Women of the Wall has demanded the right to pray directly from a Torah scroll, wearing prayer shawls and phylacteries — practices and rituals that strict Orthodox Judaism reserves for men.

A government liaison has proposed creating a third, equal and separate prayer section at the Western Wall that would be designated for mixed-gender prayer. Women of the Wall earlier rejected the plan as no larger than a glorified “sun deck.”

Women of the Wall had rejected that proposal after a court ruled the group was not breaking any laws when praying at the site, but reportedly reconsidered after the Reform and Conservative streams of Judaism accepted it.

The verbal and physical abuse the group has experienced at the hands of ultra-Orthodox extremists in recent months may also have played a role.

The continued violence, and the government’s long-standing unwillingness to allow the group to pray as it wants, has strained relations between the Israeli government and American Jews — the majority of whom are non-Orthodox.

Anat Hoffman, chairwoman of Women of the Wall, emphasized that “we are not leaving the women’s section right now and we reserve the right to prayer freely as a public holy site.

“However, we are prepared to be the catalyst and leaders of building a new, equal third section for all Jews to pray and celebrate at the Western Wall,” she said. “When that is completed to our satisfaction, we will pray there.”

Among the group’s preconditions: The rabbi who oversees the Western Wall site will not have control of the egalitarian section, and the mixed-gender section must be overseen by a board of Jewish leaders.

“The process to create an equal, third space for prayer at the Western Wall will be lengthy, and Women of the Wall maintain that until all of their conditions and specifications are met for the third section, women’s prayer stays where it belongs: in the women’s section of the Western Wall,” the group said.