WASHINGTON (RNS) As the government shutdown enters its second week, some religious groups are starting to feel the pinch, and they’re also finding ways to reach out.

More than 90 Catholic, evangelical and Protestant leaders have signed a statement rebuking “pro-life” lawmakers for the shutdown, saying they are “appalled that elected officials are pursuing an extreme ideological agenda at the expense of the working poor and vulnerable families” who won’t receive government benefits.

Starting Wednesday, evangelical, Catholic and mainline Protestant leaders will hold a daily “Faithful Filibuster” on Capitol Hill with Bible verses on the poor “to remind Congress that its dysfunction hurts struggling families and low-income people.”

Here’s how the shutdown is impacting religious groups in ways large and small: The national parks closure has prompted a blessing for some couples locked out of their planned wedding venues. Churches are opening their gardens and doors to shutdown refugees.

First, Washington Episcopal Bishop Mariann Budde invited displaced couples to wed at the Bishop’s Garden at the Washington National Cathedral. There are at least 11 weddings booked during the next two weeks, diocesan spokesman Jim Naughton said. Three have been held so far.

Then, a small church near Cincinnati, Church of Our Saviour/La Iglesia de Nuestro Salvador in Mount Auburn, Ohio, followed the cathedral’s lead.

“We have a small garden, but it’s really nice,”  the Rev. Paula Jackson told a local website. “We don’t know how long this shutdown is going to last … This is one thing we can do for people, who have a very important moment in their lives planned.”

St. John’s Rector Ken Asel  said he will put out the word that the biggest private green space in Jackson Hole will be available for the couples. Unfortunately, St. John’s most famous chapel, the Chapel of the Transfiguration with its window view of Grand Teton, will not be available because it is surrounded by the national park.

Workmen who needed to winterize the building for the season had to outrun park rangers once the roads through the park to the chapel were locked down.

The play “The Laramie Project,” about gay rights icon Matthew Shepard, was scheduled to be performed at the historic Ford’s Theatre in Washington, but several of its October dates have shifted to the nearby First Congregational United Church of Christ. The theater, where President Lincoln was shot in 1865, is operated through a partnership between Ford’s Theatre Society and the National Park Service.

The Lincoln Memorial is closed during the government shutdown on Oct. 6, 2013.

The National Transportation Safety Board might have investigated the Oct. 2 church bus accident in which eight people died in eastern Tennessee. But all of its highway investigators were furloughed.

“In this particular case I think it’s highly likely that we would have responded to it, but again, with our investigators furloughed, it’s impossible to do that,” Sharon Bryson, the NTSB’s deputy director of communications, told NBC News.

The government shutdown also threatens to reduce or shutter charitable services operated by faith-based groups that use federal funds.

As Catholic News Service reports, the Diocese of Wichita (Kansas) is covering the costs of programs for homeless families and battered women run by the local branch of Catholic Charities. In Washington, the U.S. Conference of Catholic Bishops said it would be able to continue assisting immigrants through its Migration and Refugee Services for a couple of months if necessary.

But officials also made it clear that these are only stopgap measures that still leave the poor and vulnerable at greater risk.

“It is hypocritical and shameful for those who tout their commitment to family values to show such callous indifference,” said an Oct. 2 statement released by Faith in Public Life and signed by a range of Catholic and other Christian leaders.

Justice Department lawyers are asking for more time in a case challenging the Obama administration’s contraception mandate, which has drawn strong opposition from a number of religious groups and institutions, including a suit filed by Geneva College in western Pennsylvania.

During the shutdown, government attorneys “are prohibited from working, even on a voluntary basis, except in very limited circumstances, including ’emergencies involving the safety of human life or the protection of property,'” federal attorneys told a federal court in Pittsburgh, according to the Pittsburgh Post-Gazette. 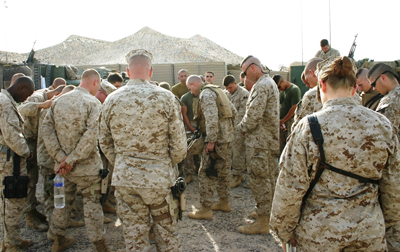 The shutdown caused some initial confusion about whether military chaplains would be able to perform religious services. The House passed a resolution Saturday (Oct. 5) urging the secretary of defense to not allow the government shutdown to reduce religious services on military bases. The Senate has not yet voted on the bill.

Military chaplains continue to work during the shutdown, but the resolution was aimed at contract chaplains involved in performing religious services or conducting religious activities, according to Military Times. Defense Secretary Chuck Hagel said he would reinstate almost all of the 350,000 civilian employees of the Defense Department, which was expected to allow contract priests to say Mass.

Still, the Roman Catholic Archdiocese for the Military Services says the shutdown is threatening Catholic service members’ religious rights. “Priests who minister to Catholics on military bases worldwide are not permitted to work — not even to volunteer. During the shutdown, it is illegal for them to minister on base and they risk being arrested if they attempt to do so,” warned John Schlageter, general counsel for the military archdiocese. 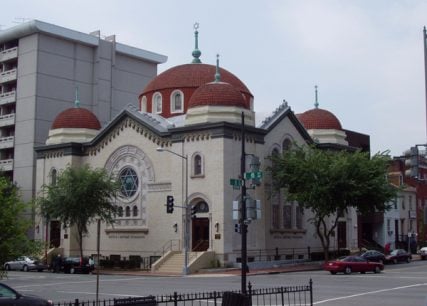 Sixth & I Historic Synagogue received $75,000 in preservation funding to renovate a dozen of its stained glass windows. Photo by Bruce Guthrie/courtesy The Harbour Group

A short walk from the Capitol sits Sixth & I, a restored synagogue that is now part synagogue and part cultural center and that has proven especially popular with younger Jewish adults. During the shutdown, Sixth & I sponsors “Shutdown Central” under the motto “A shutdown shouldn’t mean putting your mind to rest. Let’s make something out of this nothing.”

On any given day, that means a roster of programming that can include improv classes with local comedians, a class on government transparency and a knitting circle. But every day there’s “Political Ping Pong,” board games and the constant streaming of “The West Wing.”

In Vernal, Utah, St. Paul’s Episcopal Church offered free lunch to furloughed employees on Sunday (Oct. 6): “We recognize that those who are employed by the Federal Government are an integral part of what makes our community work and that their loss of wages is through no fault of their own.”