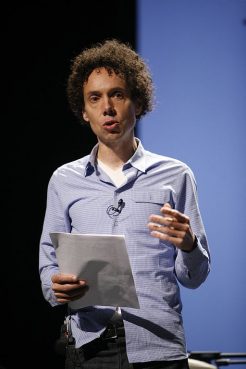 (RNS) Author Malcolm Gladwell may not be known for writing on religion. His New York Times best-selling books “The Tipping Point,” “Outliers,” “Blink” and “What the Dog Saw” deal with the unexpected twists in social science research. But his newest book, “David and Goliath: Underdogs, Misfits, and the Art of Battling Giants,” also includes underlying faith-related themes, and not just in the title. Gladwell said that while researching the book, he began rediscovering his own faith after having drifted away. Here, he speaks with RNS about his Mennonite family, how Jesus perfectly illustrates the point in his new book and how Gladwell’s return to faith changed the way he wrote the book. The interview was edited for length and clarity.

Q: You use the biblical story of David and Goliath in the title and the setup to your book. Do you think we’ve been retelling the story poorly?

A: I think there has been an overemphasis of the idea that David’s victory was improbable. When you look closer to that story and you understand the full historical context, you see it from a different perspective. Here was a guy who brilliantly changed the rules of combat. He was equipped with a sling that was routinely used by armies to defeat the sort that Goliath was. David was very skilled at using the weapon and he was filled with the spirit of the Lord. Put those things together, why is he an underdog? He’s smarter than his opponent, better armed and he had this extraordinary force in his heart. When you understand that perspective, you understand that sometimes our instinct about where power comes from is wrong.

Q: What are some other examples of faith influencing power?

A: The final two chapters of the book also deal with faith: one about a woman who forgives her daughter’s murderer and one about the Huguenots in France who defy the Nazis in World War II. In both cases, people were able to do extraordinary things because they were armed with faith. They were able to perform acts of courage because they came from godly traditions. In both cases, there are people who had been through enormous adversity and had survived — more than survived, thrived.

Q: Is it true you grew up in an evangelical home?

A: Yeah. I grew up in southwestern Ontario in the heart of a Mennonite community. All my family are part of the Mennonite church. I joked at [the recent evangelical conference] Catalyst that I’m the only member of my family who had never delivered a sermon. Everyone has been to seminary, been a lay preacher, the list is very, very long in my extended family of people who have had opportunities to give a sermon. My joke at Catalyst was that it was my sermon; I finally got to give one.

Q: If your family is still religious, are you?

A: I’ve had a different journey. I had drifted away a little bit. This book has brought me back into the fold. I was so incredibly struck in writing these stories by the incredible power faith had in people’s lives, it has made a profound impact on me in my belief. That’s been the completely unexpected effect of writing this book. I am in the process of rediscovering my own faith again.

Q: Would you call yourself a Christian, or are you figuring that out?

A: I would. On my website, for years, I’ve had this statement of what I believe so readers can know where I’m coming from. “I believe in God.” I put that on years ago because I felt it was important that people who read my work knew the perspective that I came from. It changes how people read you if you believe in God. It gives insight into your motivation, how you look at problems and how you deal with people.

Q: Are you part of a church or group?

A: Not at the moment. I was when I lived in DC. I would go to Washington Community Fellowship. One of the things I’ve been thinking about is trying to join a community. I would probably be drawn toward the Mennonite world and the Anabaptist tradition. It’s my family’s tradition now, and their values and interpretations are most consistent with what I have come to feel is important.

Q: Has the evolution of your faith informed your writing?

A: I feel that I have been asking different kinds of questions. This book differs from past books because it’s less about looking at things at a high, theoretical level — what are the principles that govern the way we behave or the way success happens. This book is much more concerned with individuals and the choices they make. Going in that direction makes sense if you’re taking religious perspectives much more seriously.

Q: This seems like the most religious of  all of your books.

A: You’re right. That’s why I titled it after one of the most famous of all Bible stories. The choice of how to end the book is really important because it frames the whole experience. The theme of the book is that much of what is beautiful and powerful in the world comes from adversity and struggle. The other theme is that people who appear to have no material advantage are much more powerful than they appear.

Q: David and Goliath is quite famous, yes. What about Jesus? Where might he fit in in your narrative?

A: He does fit. Here is one of the most revolutionary figures in history. He comes from the humblest of beginnings. He never held elected office. He never had an army at his disposal. He never got rich; he had nothing that we would associate with power and advantage. Nonetheless, what does he accomplish? An unfathomable amount. He is almost the perfect illustration of this idea that you have to look in the heart to know what someone’s capable of.

Q: Many Christians point to some kind of personal conversion experience? Did you have one?

A: I realized what I had missed. It wasn’t an “I woke up one morning” kind of thing. It was a slow realization something incredibly powerful and beautiful in the faith that I grew up with that I was missing. Here I was writing about people of extraordinary circumstances and it slowly dawned on me that I can have that too.