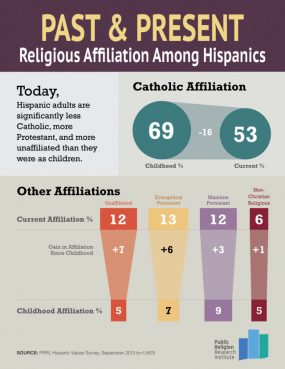 The share of Hispanics living in the U.S. who say they are atheist, agnostic or have no religious affiliation has reached 12 percent, according to the 2013 Hispanic Values Survey conducted by the Public Religion Research Institute. That is double the rate reported in 1990 by the American Religious Identification Survey.

Researchers say Hispanic “nones” are now statistically equal to the number of U.S. Hispanic evangelical Protestants — 13 percent — and warn of a religious divide in the Hispanic community that will be felt for decades to come.

“Lots of attention has been given to the rise of Hispanic evangelicals, but they have a parallel universe in the religiously unaffiliated, who think very differently about many issues,” said Juhem Navarro-Rivera, a PRRI research associate who worked on the study. “There is a kind of polarization going on.”

Because abortion and same-sex marriage are often hot-button issues in elections, politicians should be wary of viewing Hispanics as a monolithic group.

“They think differently,” Navarro-Rivera said of Hispanic evangelicals and nones. “They serve as an ideological counterweight” to each other.

The rise in the number of Hispanic nones reflects a “catching up” to the broader American community, where 20 percent have no religion, said Hector Avalos, a professor of religious studies at Iowa State University who studies religion and unbelief among Hispanic Americans.

“They have not been here long enough to be part of the trend but their children are and will be,” he said.

Navarro-Rivera lays much of the change at the feet of younger Hispanics, who are largely American citizens and English-speakers.

“Most Hispanics who immigrate to the U.S. are Catholic,” he said. “But once you get here, you realize there are other religious options and your children are going to see neighbors who go to another church or they may realize their friends don’t go to any church.”

That reflects the experience of David Tamayo, president and founder of Hispanic American Freethinkers, a national organization of nonbelievers of Latino origin with affiliates in Utah, California, New Jersey, Illinois, Florida, Texas and Washington, D.C.

“I can count on one hand the number of Hispanic nones I know who were raised atheist or agnostic,” he said. “All of them were taken to church as children, were baptized. So I think the study reflects a lot of the reality of the nones.”

It also illustrates his own life. Tamayo, 49, was a Catholic until seven years ago when he read Stephen Hawking’s  “A Brief History of Time” and encountered a description of a universe so vast humans could never reach its limits.

“All of a sudden I started questioning. … In a period of about three weeks I became convinced that no one knows about God.”

Tamayo’s experience highlights another of the study’s findings — while 69 percent of Hispanics are reared Catholic, only 53 percent say they are still Catholic as adults.

“It used to be that Latino identity meant a Catholic identity,” said Avalos. “That is no longer the case.”