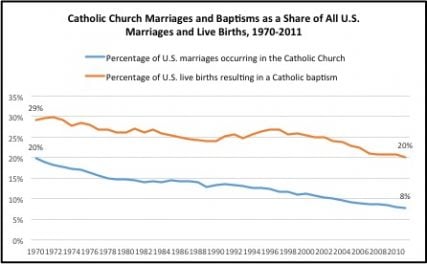 Welby made it a teachable moment for a country where only one in six are baptized. In a YouTube video, he explains that by bringing their son forward for baptism, Prince William and Duchess Catherine are “bringing God into the middle of it all.”

Last month, Pope Francis gave the sacrament a boost when he called a pregnant, unmarried woman to encourage her faith and offered to baptize her baby. While his main message was anti-abortion,  his call also reminded Catholics that children of unmarried parents are welcome in the church.

Yet, it seems unlikely that even these leading voices in Christendom will reverse the nose-diving rates of baptism in the United States, where fewer people seem to think it’s essential to have “God in the middle.”

A rise in secularism

Set aside that one in five Americans today say they have no religious identity. Even among those who do claim a denominational label, “there is a de-emphasis on practicing faith,” said the Rev. Frank Page, president of the Southern Baptist Convention’s Executive Committee. “People want God but they’re not happy with churches,” he said, so rites such as baptism are victims of an “anti-denominational, anti-institutional, even anti-church era.”

The SBC, which considers baptism a key marker of Christian faith and also denominational vitality, tallied 314,959 baptisms in 2012 — a low not seen since 1948.

“It’s a sad situation,” said Thom Rainer, president of LifeWay Christian Resources. “In 1948 we had 6 million members of the SBC but today we have (nearly) 16 million members.”

Yet, Rainer called himself an “obnoxious optimist.” Although his research on the nation’s 80 million “millennials” (born between 1980 and 2000) shows that only 15 percent call themselves Christian, Rainer said those youth are “on fire” for faith.

“So it all might turn around,” he said. “I’m standing on prayerful hope.”

One in four U.S. households were multifaith in 2006, up from 15 percent in 1988, says Naomi Schaefer Riley in her book, “‘Til Faith Do Us Part.” Such couples often compromise by ditching specific faith rituals such as baptism to avoid contention.

Even so, divorce is three times more prevalent in interfaith families with children than in same-faith households, often leaving the children of those broken marriages confused or indifferent about God, sacraments or the path to salvation.

When a couple opts not to get married in a church, it’s an early sign that a couple may view the blessings of faith as optional for their family, said Mark Gray, senior research associate at Georgetown University’s Center for Applied Research in the Apostolate.

Gray tied the sliding baptism rate to the decline in marriages officiated by a priest. The Catholic Church regards marriage as a sacrament to be celebrated in the sacred space of a church.

There’s a disconnect at the get-go “if you are getting married at a country club or the beach,” said Gray. “If you haven’t been married in a church, you may be less likely to present your child for baptism.” 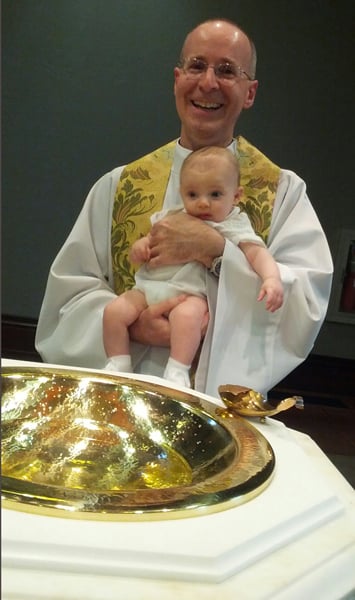 Gray said the rising number of out-of-wedlock births may contribute to the decline in baptisms. “Single parents may be less apt to bring a child for baptism because of a misapprehension that they won’t be welcome.” But as the pope’s call to the Italian woman shows, “The church is not going to turn you away,” Gray said.

The Rev. James Martin, a Jesuit priest, author and editor at large at “America” magazine, worried that many parents don’t understand the theology of baptism, “the most familiar but misunderstood sacrament.”

“It’s become a rite of passage for the family rather than what it really means — an incorporation into the Christian community. So some parents don’t realize why it takes place during a Mass or why godparents should be Catholics. They are surprised that preparation is involved.”

Still, said Martin, “It’s my favorite sacrament, much more than weddings. Everyone is happy at a baptism. No one is worried about the flowers or the reception or what the baby is wearing. It’s a great teachable moment about the church, God and love.”