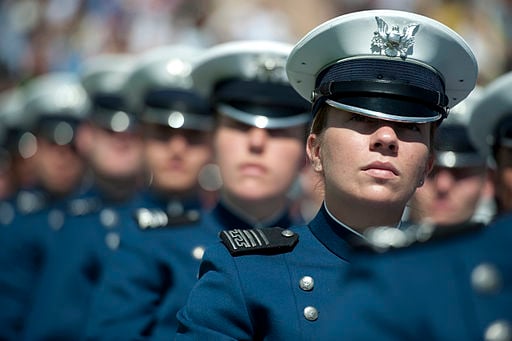 (RNS) Air Force Academy cadets will no longer be required to include the words “so help me God” when taking their annual Honor Oath. On Friday (Oct. 25), officials at the Colorado Springs, Colo., campus announced its 4,000 current cadets would be allowed to opt out of the final phrase of their honor code, which they reaffirm each of their four years of study and training.

"Here at the Academy, we work to build a culture of dignity and respect, and that respect includes the ability of our cadets, Airmen and civilian Airmen to freely practice and exercise their religious preference -- or not," said Lt. Gen. Michelle Johnson, the academy's superintendent, in a statement.

"So in the spirit of respect, cadets may or may not choose to finish the Honor Oath with 'So help me God.'"

The current oath reads: "We will not lie, steal or cheat, nor tolerate among us anyone who does. Furthermore, I resolve to do my duty and to live honorably, so help me God."

The oath was adopted by the academy’s first class in 1959 without the final phrase, which was added in 1984 following a cheating scandal. Honor oaths at other U.S. military academies do not include the word “God.”

The change came after complaints from the Military Religious Freedom Foundation, a New Mexico-based watchdog organization headed by Michael Weinstein, a lawyer and Air Force Academy graduate whose family includes seven people who have attended the academy.

Weinstein has had other successes in rooting out religion from the military. In 2011, he successfully challenged an Air Force nuclear training course that included Bible verses and religious imagery in a PowerPoint presentation.

More broadly, Weinstein has been among the most vocal critics of the religious atmosphere at the Air Force Academy, where he and others say Christianity is given preferred status and inappropriate religious proselytism is rampant.

The decision has exposed a rift among academy alumni, their families and others associated with the military. Comments left on the academy’s website, where the decision was first announced, range from sadness to anger to approval.

John Van de Kamp, a member of the class of 1968, wrote that the honor code guided him throughout his life, though he graduated before the addition of the now-optional phrase. “It's a disgrace to bow to political correctness and take God out of the equation even though He guides and strengthens cadets and the Academy's leadership day by day,” he wrote.

But someone identifying herself as Kathy from Washington wrote, “This is a compromise that allows the individual cadets to choose. It should be enough to please any sensible person. Go Air Force.”