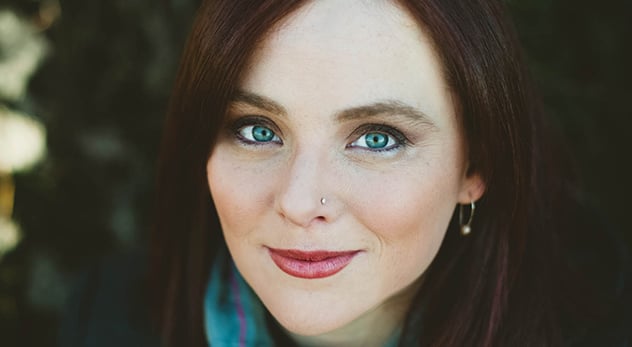 The f-word makes a lot of Christians uncomfortable, and by “f-word”, I mean “feminist.” For example, theologian Wayne Grudem argues in his book Evangelical Feminism: A New Path to Liberalism that feminism is the gateway to “a system of thinking that denies the complete truthfulness of the Bible as the Word of God and denies the unique and absolute authority of the Bible in our lives.”

But for Canadian blogger Sarah Bessey, them’s fightin’ words. She says that she is a feminist because of the Bible and adds, “Jesus turned me into a feminist.” Her new book Jesus Feminist: An Invitation to Revisit the Bible’s View of Women is a wildly popular exploration of gender in light of her interpretation of the Christian scriptures. Here, Bessey and I discuss how she defines feminism, where the church has misunderstood the issues, and what she wants to say the submissive homemaking woman who is happy with her life.

JM: To begin, we really need to understand what you mean by “feminism.” How do you define it?

SB: I define feminism as the simple belief that women are people, too. At the core, feminism simply means that we champion the dignity, rights, responsibilities, and glories of women as equal in importance to those of men, and we refuse discrimination against women. That’s it.

JM: You’ve made the provocative statement that Jesus made a feminist out of you.  Can you say more about that?

SB: Well, the title of my book, Jesus Feminist, started as a bit of a joke to be honest. As I became more passionate about women’s issues in both the Church and in the world, I began to call myself a feminist.  In some circles, this was usually met with surprise or disbelief or distrust. People would usually ask me, “Well, what kind of feminist are you?”

I understand that reaction, I do. Because the Church has been fed such a divisive and stereotypical view of feminism over the years, they were really asking me if I was angry or bitter or a lesbian or pro-choice. They wanted to know if that meant I was against marriage and motherhood, or if I was responsible for everything evil they’d ever heard about “those feminists” from Christian radio shock-jocks and straw-man arguments on Sunday mornings. After all, we’ve heard feminism blamed for everything from day care to rape culture, from bikinis to tornados, from abuse to childhood obesity. So when people would ask me, “What kind of feminist?” I would laugh and say, “Oh, I’m a Jesus feminist!” It stuck in a disarmingly cheeky sort of way because by saying that I meant that I was a feminist precisely because of my love for Jesus, because following Jesus turned me into a feminist.

I get into it a bit more in the book, but after a season of my life spent wandering, I emerged from a spiritual wilderness crazy about Jesus. I poured over the Gospels, and decided that I wanted to follow this man for the rest of my life, wherever he took me. I learned about the Kingdom of God, I learned to look at my life and even the world through the lens of Jesus’ life, ministry, and teachings. And as I became more active in women’s issues, I began to see specifically how Jesus interacted with women in the Gospels. It was revolutionary. It was profound. It was just plain normal. And I loved it. Jesus thought women were people, too, and at that point, [tweetable] I decided that I wanted to be a feminist in the way that Jesus would be a feminist [/tweetable].

When I say “Jesus made a feminist out of me” it also means that Jesus shapes my feminism, rather than the other way around. When I decided to become a disciple of Jesus, it meant that I wanted to live into my right-now life the way I believed Jesus would do it–that included my passion for and advocacy for women’s voices and experiences, healing and justice. It’s precisely because I follow Jesus that I want to see God’s redemptive movement for women arch towards justice.

JM: You believe that many churches don’t fully welcome the gifts of women into their congregations. Why do you think that?

SB: I cherish my place as an outsider to a lot of American evangelicalism for several reasons, but one of them is that my experience as a woman in the church has been overwhelmingly positive and affirming. I see this book as an invitation to the life waiting on the other side of our Church’s gender debates. In many ways, I am post-gender debates: these issues have been settled for so long in my story that I want to tell about how God is moving and transforming out here in the freedom of equality, what life looks like “on the other side.”

In my research though, there are a lot of articulated reasons for churches to hold back women: misunderstanding or misapplication of Scripture, tradition, fear, cultural conditioning, all of it. But at the root, I believe it’s about power. And that’s where I see Jesus being so subversive because he turns our world’s power structures and household codes, all of it, on its head with his teaching. In Matthew 20, Jesus tells us that among us, it shall be different and I believe that as we follow Jesus, we’ll follow him right into an upside-down Kingdom of love, servanthood, and wholeness among us all.

JM: I’d imagine some conservative theologians would yawn when they hear you say that. They might respond that they heard all the arguments of Christian feminists years ago. What new information are you providing in this book that you believe can take the conversation to new places?

SB: Well, to be honest, I’m not sure that’s my focus. I’m not really one for arguing or convincing, and debates make me nervous. That’s not really my purpose or identity. I see myself more as a storyteller. To me, this book is less about Christian feminism and more about the Kingdom of God and what it looks like when we are all walking in freedom, love, and wholeness together. I would hope that conservative theologians read it, if for nothing else than for a chance to hear my heart. Unity doesn’t mean conformity, and I’ve learned much from conservative theologians and pastors and friends personally.

JM: What do you say to the submissive homemaking woman who says she’s quite happy in the role she’s in?

SB: Well, from the outside, my life probably looks more like that woman’s life than what most people conjure up when they think of a feminist! I’m a happily-married mother of three, I made the decision to leave my career to stay home and raise our tines. I handle most of our housework and that sort of thing. So I imagine that your hypothetical woman and I actually have a lot in common.

But the difference I think you’re wanting to hone in on here is an important distinctive: the motivation for our choices. I didn’t make the decision to do these things because I felt I had I had to do so or because of an outside expectation to “be a good Christian wife” or even to achieve status as an official “biblical woman.”  My role as a wife and stay-at-home mother or chore chart don’t make me a “better woman” before Christ.  [tweetable] We can’t confuse a sanitized American sitcom society that never actually existed with biblical womanhood [/tweetable]. After all, women have always worked and will always work. It’s a straw-man argument in many ways.

I talk a bit in the book about mutual submission and what that can look like in a marriage, but in these situations, it’s more about our hearts before Christ, and our willingness to let people follow the Spirit where he leads within their circumstances and context. Can we make our choices and follow Jesus without judging others or attempting to make our own experiences universally applicable. For instance, a lot of the narrow debates about womanhood in the Church completely ignore the global voices and experiences and needs of women, let alone women in our own neighbourhoods who aren’t wives and mothers etc. Following Jesus as a woman has to be more than these narrow definitions or chores or roles, even as we seek to glorifying him within them. I believe that the Holy Spirit transforms our hearts and minds and then our lives: regardless of our past, our context, our privilege or lack thereof. If we are disciples, we are participating in the life of Jesus now and the way we engage in our lives matters.

But ultimately, in that relationship or conversation, I would hope that we are both known by our love for one another. Even if this woman in your example and I differ on our conclusions about marriage and womanhood, I hope my work and witness as a “Jesus Feminist” is marked by who I build up, not who I tear down. We can both be the ones who speak life, not death, the ones who empower and affirm each other.

I’ve turned more and more towards the Apostle John’s words in 1 John 4: If we love one another, God dwells deeply within us, and his love becomes complete in us. When we take up permanent residence in a life of love, we live in God and God lives in us. This way, love has the run of the house, becomes at home and mature in us… There is no room in love for fear. Well-formed love banishes fear. Since fear is crippling, a fearful life—fear of death, fear of judgment—is one not yet fully formed in love. We, though, are going to love—love and be loved. First we were loved, now we love. He loved us first.  If anyone boasts, “I love God,” and goes right on hating his brother or sister, thinking nothing of it, he is a liar. If he won’t love the person he can see, how can he love the God he can’t see?

The command we have from Christ is blunt: Loving God includes loving people. You’ve got to love both.”