Inscribed on a ceremonial silver mace in Scottish Parliament are the words “Wisdom, Justice, Compassion, Integrity.” 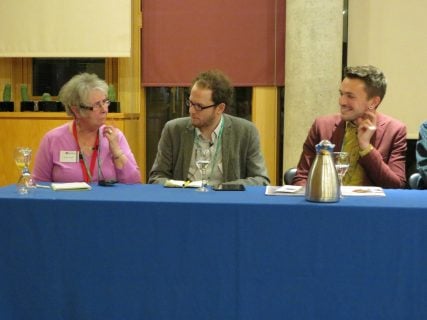 Isabel Smythe of the Committee for Interreligious Dialogue, Rory Fenton of the British Humanist Association, and Chris Stedman of the Yale and Harvard Humanist communities discuss shared values and ethics at Scottish Parliament in Edinburgh on Nov. 9, 2013.

Isabel Smythe, who works on interreligious dialogue in Scotland and describes herself as a Catholic Humanist, says these words can connect us all, regardless of faith.

Smythe was one of the 40 theists and atheists who gathered at the Conforti Institute in Coatbridge, Scotland last weekend to discuss how shared ethics and values can be used to bridge the non-faith/interfaith divide.

Convery and others acknowledged that convincing believers and nonbelievers to attend the conference was at times difficult, and Fr. Carl Chudy thanked participants for “taking the risk” to come together to discuss more than their differences.

Chris Stedman, who works with the Harvard and Yale humanist communities, kicked off the weekend’s discussion with a question he hears often: Why would an atheist such as himself care about interfaith dialogue?

Stedman sees five main reasons humanists should engage in these discussions: 1) humanists are outnumbered, 2) they want to end extremism and oppression, 3) they want to overcome negative stereotypes and discrimination against non-believers, 4) they can learn from interfaith groups, and 5) such dialogue is consistent with their humanist values.

Stedman said mere tolerance of the other is not enough. Believers and nonbelievers should befriend and try to understand one another. Instead of living by the Golden Rule — do unto others as you would have them do unto you — Stedman says we should strive for what he termed the Platinum Rule — ask people how they want to be treated and treat them accordingly.

Fr. John Sivalon, a professor of theology at the University of Scranton in Pennsylvania, spoke after Stedman. He took a morbid but poignant turn. In seeking common ground, he said that our commonness is in the ground. Humanists and religious believers alike will all die.

“If we accept that we will all die, we open ourselves up to love. In the face of death, these differences melt away,” he said. “The fact that we’re different helps us come to clarity about who we are.” Chris Stedman, Assistant Humanist Chaplain at Harvard, Coordinator of humanist life for the Yale Humanist Community, and author of Faithiest: How an Atheist Found Common Ground with the Religious. Conforti Institute in Coatbridge, Scotland on Nov. 8 , 2013.

Stedman echoed these thoughts in a later speech at Scottish Parliament in Edinburgh. “Although we have different beliefs about the afterlife, we do believe in sharing this world.”

Sivalon said dialogue within one’s own denomination can sometimes be harder than interfaith discussions, where people are more likely to have an open mind. “We’re not angry atheists or we wouldn’t be here,” one participant quipped about the self-selecting nature of attendees.

After a day of dialogue, participants identified and discussed areas of potential overlap where humanists and believers can better work together. These included reaching across theological divides, combating negative stereotypes on both sides, engaging “apatheists” (apathetic atheists), promoting gender equality, and working toward conflict resolution.

Several humanists in the group took issue with the term “interfaith,” which by many definitions would exclude them for not belonging to a particular faith. Others addressed the common (mis)conception that interfaith dialogue leaves no room for disagreement.

What I found most striking about this gathering of atheists and believers was the high level of civility and respect all parties showed. When I worked at Free Speech Debate, two principles we proposed as critical to ensuring the free exchange of ideas are:

We speak openly and with civility about all kinds of human difference.

We respect the (humanity of the) believer but not necessarily the content of the belief.

This weekend’s dialogue in Scotland benefited greatly from adhering to both principles, and the conversation is far from over. The Xaverian Missionaries hope to team up with the American Humanist Association to host a similar summit on the other side of the Atlantic soon.

Until then, there will be plenty to reflect on at Inter Faith Week starting Nov. 17 in England, Northern Ireland and Wales and Nov. 24 in Scotland.