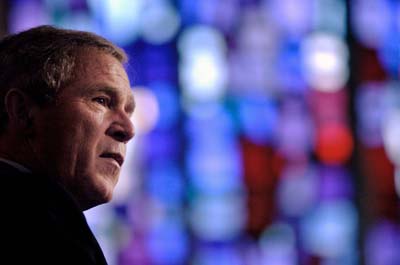 Maybe, just maybe, George W. Bush is mystified by the uproar over his plan to speak tonight at a fundraiser for the Messianic Bible Institute in Irving, Texas.

Maybe he’s unaware of this action as offensive, thinking, “...But some of my best friends are (fill in the blank)…"

But today, those Jewish friends are gob smacked that the ex-president is raising money for people who want to see the end of Judaism.

They thought their objection was self-evident: Messianic Jews claim you can keep Jewish rituals and traditions and still accept Jesus.  They believe this conversion is essential to prompt the Second Coming.

But theologically, Jesus is the dividing line between Judaism and Christianity. Jews respect Jesus as a great teacher but they do not accept him as the messiah. Rabbi David Wolpe explains in his 100 page classic book, "Why Be Jewish?”

In the Christian tradition, Wolpe writes, “all human beings are born sinners and only unearned grace can save them. In the Jewish tradition, each of us writes his or her own personal moral slate. We do not begin life with an unpayable debt. Each moment we make a moral choice. Our lives are the sum of our actions, tempered by our intention, limited by our endowments, ennobled by our faith.”

Just because Bush himself was once was a self-proclaimed lost soul who found his faith in Christianity, does not invalidate Jews ties to God through Judaism.

After Sarah Posner broke the news of Bush's speaking plans in "Mother Jones," many thought the ensuing storm of criticism would prompt the ex-president to step aside.

Rabbi Jeffrey Salkin, blogging for "The Jewish Journal," makes the point  by playing speechwriter and offering Bush a suggested text. It begins by Bush telling the Messianic crowd that a conversion campaign is in error. Bush would say, in Salkin’s words:

The covenant that God made with the Jews at Sinai – that’s like Covenant 1.0.

The covenant that God made on Calvary through the blood of Jesus Christ is like Covenant 2.0.

Some of us think that the new covenant wiped out that older covenant.

I would like to invite you to believe something else. Imagine that Covenant 1.0 – the one at Sinai – and Covenant 2.0 – the one at Calvary – both sit on God’s desktop. God's spiritual desktop is bigger than anyone can imagine. And both of those covenants are still valid for those who believe in them.

Is George Bush’s speech an act of Christian love or an offense to the Jewish faithful? How big is God's spiritual desktop?

Please jump in with your views but remember that Faith & Reason welcomes all views, respectfully presented. Post early, post often, and share with your friends and followers.

September 3, 2020
Related Posts
By Jeffrey Salkin
With new nation-state law, Israel shoots herself in the foot
By Cathy Lynn Grossman
Nazi SS guard case raises question: Is there an age limit on justice?