Amid recent banter about Christian persecution and martyrdom, here are some highlights from Fathom editor Alan Johnson‘s interview with Rupert Shortt, author of Christianophobia: A Faith Under Attack.

Alan Johnson: Let’s start with some big questions about the word ‘Christianophobia.’ First, what does it mean?

Rupert Shortt: It covers a multitude of sins really. I grant you that the word ‘phobia’ implies something rather passive, unlike the more active evil of antisemitism. But ‘anti-Christianism,’ just like ‘anti-Muslimism,’ hasn’t really caught on as a term, so I thought I would adopt a coinage used by other people – I can’t claim a monopoly on it or on its meaning. But it is something I hoped would be reasonably eye-catching and would draw people’s attention to what I see as a neglected human rights issue.

AJ: What is the extent and nature of the persecution faced by minority Christian groups in the Middle East?

RS: It’s very widespread. In a vast belt of land from Morocco to Pakistan there is scarcely a single country in which Christians can worship entirely without harassment. Now, in some of those countries, the Christian presence is very small; in Morocco, for example, I think there are only a few baptisms every year. But in a country like Egypt, where the Christian population is over 10 percent and the country has ancient Christian roots, over the past 30 years or so, something like 60,000 Coptic Christians have left Egypt.

Now, am I saying that every one of those people who left Egypt was at risk of violence? No I’m not. But some of them were. Many Christians have been killed in Egypt and many churches have been bombed, including on occasion when people have been worshipping inside them. And there is also a great deal of discrimination against businesses and educational institutes.

My book isn’t by any means confined to problems in Muslim-majority countries. There is a great deal of Hindu extremism – in India in particular. There is even Buddhist-tinged chauvinism in societies including Burma and Sri Lanka, and of course there are still Communist countries where the situation for not only Christians, but other religious groups, is severe. 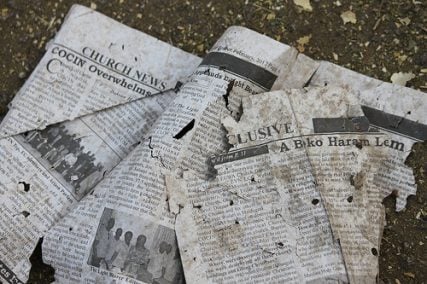 Debris from outside Nigeria’s COCIN church, which was bombed in February 2012.

AJ: What motivates Christianophobia? Is it theology, or is religion really a fig-leaf for other motivations?

RS: I think that’s a really important question. One of the things that you discover when you investigate this area is that religion is so often used as a fig leaf or, to change the metaphor, a sort of flag of convenience for what are basically political and social problems. That’s very clear in a country like Nigeria where a good 80 percent of Christians dying violent deaths are dying because of a very severe confrontation between Islamists who are mainly based in the north and Christians in the south. They meet in the central belt of the country, which is much more fertile and where a lot of people want to migrate. So we’re talking about turf wars here, tribal conflicts.

Of course religion plays into the mix as well; there is a theological element to the question. In Nigeria, the Islamist group that is fomenting a great deal of violence at the moment is influenced by Wahhabi ideology from Saudi Arabia, so there’s a sort of geo-political element to the whole problem there. When we’re talking about other parts of the Muslim world, the difficulty concerns apostasy, so-called, and blasphemy. It’s relatively easy for a Christian woman to marry a Muslim man. It’s very, very difficult for a Muslim woman to marry a Christian man because of the assumption that a wife will take on her husband’s religious identity. There is a sense, alas, that you can convert to whatever faith you like in many of these societies, as long as it’s Islam.

The whole notion of religious freedom is very, very problematic in Muslim countries. Of course, there are certainly very intolerant Christian majority countries, particularly in the Eastern/Orthodox world – I’m thinking about Russia in particular of course, but also Belarus, which still has the form of a sort of Soviet-era dictatorship. There are also highly tolerant Muslim societies such as Senegal. But by and large, religious tolerance is not high in many Muslim countries. And this has knock-on effects in other aspects of life; countries which allow freedom of religion tend to prosper in other ways, including economically.

AJ: Our society is usually sensitive to oppression and discrimination, and we are increasingly willing to take a stand against it. Yet when it comes to anti-Christian hatred and violence, we have not responded with any kind of urgency at all. Why is that?

RS: I’m sorry to say there’s a bit of a hierarchy of victimhood here. It’s just not very fashionable to be a persecuted Christian. I’m also rather concerned that we’re suffering from a bit of a liberal blind spot if you like. We’re very, very sensitised to the perceived sufferings and complaints of Muslims, many of which I will be the first to say are justified. I opposed the Iraq war, to give an example from very recently, and I’m acutely conscious of the way that the history of Anglo-French colonialism in the Middle-East has had many negative consequences. But at the same time, I want to warn against swallowing whole, what I see as a highly questionable victimhood narrative of certain Islamists. The lie at the heart of the al-Qaeda narrative is that Muslims are targeted and persecuted like no other group. That to me rests on a falsification of history and that needs to be resisted.

AJ: You argue that ‘while the 20th century was marked by clashes of political ideologies, there are strong grounds for thinking that interfaith relations and the politics of identity that they betoken will be among the dominant challenges of the 21st century.’ Can you talk a little about this huge geopolitical shift and its implications?

RS: Across the world, secular conflicts have taken on a more religious tinge. It’s partly a result of the spread of freedom, I think. Some people think that the growth of democracy and liberty leads inevitably to the eclipse of religion. On the contrary, as people have been allowed to express their private views more openly, the religious basis of their convictions comes out more clearly. If you take countries as varied as, let’s say, Turkey and India, the founding fathers of these countries had a secularist vision, not least because they saw it as a means of uniting the populations. But since the second wave of democratization during the 1970s, faith has come more to the fore. It’s thought that about three-quarters of the human population now profess a religious faith, and that figure is projected to rise to the 80 per cent mark by 2050. Given the durability of faith, I think that if religion is not going to be part of the solution, it is going to be part of the problem.

AJ: How can we tackle the problem of Christianophobia?

I think we’re talking about many strands of action being needed. Western governments are a little bit timid about sticking up for Christians … There is a self-lacerating element in Christian societies, probably born out of guilt over colonialism and also probably connected with the deep splits within Christianity, which has meant that Christians in the West have had very little contact for a thousand years with their co-religionists in the Orthodox world. This timidity on the part of Christian governments in the West when it comes to sticking up for their fellow believers is a real problem. I hope more will be done at every level – the UN, NGOs and government-to-government contacts – because religious freedom is the key to all sorts of other freedoms, and societies that practice religious freedom tend to do very well in all sorts of other ways.

For a different perspective on the role governments should play, read my interview with Elizabeth Shakman Hurd, who argues that government-led religious freedom outreach efforts may do more harm than good.