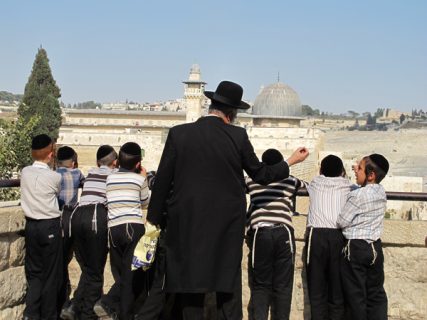 A group of ultra-Orthodox Jews in the Jewish Quarter of Jerusalem’s Old City look out onto the Al-Aqsa Mosque on September 13, 2012. RNS photo by Neri Zilber

JERUSALEM (RNS) This holy city, home to three monotheistic faiths, is no stranger to religious tensions. One locale, however, stands above the rest.

Known to Jews as the Temple Mount and to Muslims as the Haram As-Sharif (the Noble Sanctuary), the most sensitive site in this most sensitive of cities is buffeted by a growing chorus of Israelis demanding their government allow Jewish worshippers access to the site, and thereby reverse decades of political and religious precedent.

Miri Regev, a parliamentarian from the ruling Likud Beitenu party, has held several hearings on the issue during the past several months. One such hearing degenerated into a heated argument between right-wing Jewish parliamentarians and Israeli-Arab representatives who eventually stormed out.

“Every citizen of the State of Israel should be allowed to pray in the places holy to them, whether they are a Muslim, a Jew, or a Christian,” Regev said.

According to Jewish tradition, the Temple Mount was the site of the Jewish temple, destroyed by the Romans in A.D. 70. The Western Wall, Judaism’s holiest site today, is believed to be the last of the ancient temple’s massive retaining walls.  Perched directly above the Western Wall is the Al-Aqsa Mosque as well as the Dome of the Rock, a gold-colored gem that dominates Jerusalem’s skyline and is, according to tradition, the place where Mohammad ascended to heaven.

During the 1967 war, Israel seized East Jerusalem and with it the Old City and the holy sites. Since then, the Israeli government has ensured relatively open access to people of all faiths — Jews, Muslims, and Christians. This openness is now being used by some Israeli Jews to gain legal access to the Temple Mount.

Concerns about how the site is handled are well founded. The Temple Mount/Al-Aqsa Mosque compound is the scene of sporadic riots by Muslim worshippers targeting the Israeli security presence there, as well as the Jewish worshippers below.

When Ariel Sharon visited the site in 2000 as Israel’s opposition leader, he helped spark the Second Intifada (“uprising”), referred to by Palestinians as the “Al-Aqsa Intifada.” The opening by Israeli authorities of archeological tunnels under the Temple Mount in 1996 led to widespread clashes in the West Bank and the deaths of more than a dozen Israeli soldiers and scores of Palestinians. In the 1980s, Israeli authorities arrested an underground Jewish terrorist cell that was planning to blow up the Dome of the Rock.

Muslim authorities say any talk of allowing Jewish worship on the Temple Mount is a provocation that would undo the status quo.

“Jews don’t have a right over one gram or centimeter,” said Mahmoud Abu Atta, spokesman for the Al-Aqsa Institute for the Preservation of the Trust and the Heritage. “If they try to change past agreements — to divide Al-Aqsa — there will be a religious war in the entire world.”

For their part, Jewish pressure groups, both within government and outside, claim they only want a small area in the Temple Mount courtyard set aside for Jewish worship. The problem they face, however, is not political or security-related, but religious.

Israel’s Chief Rabbinate, responsible for all religious decrees touching on state institutions, has ruled that Jewish prayer on the Temple Mount is forbidden according to Jewish law. The ruling has to do in large part with its location as the resting place of what Jews consider the Divine Presence, the “Holy of Holies.”

“I have asked the Chief Rabbinate to recognize the reality that there’s a growing public [in Israel] that has its own rabbis . . . that allow them to go up to the Temple Mount,” Ben Dahan has said.

Such rabbis overwhelmingly hail from the religious-nationalist stream of Orthodox Judaism, considered close to the settler movement.

“The Chief Rabbinate isn’t the sole authority,” an aide to Ben Dahan said.

Observant right-wing Jews continue to visit the Temple Mount on a regular, if limited, basis. Hundreds of foreign tourists and non-Muslim Israelis are allowed to visit the site monthly, according to the Israeli national police.

But Israeli police officers securing the Temple Mount complex uphold the ban on any form of (non-Muslim) worship, although zealot activists often clandestinely recite prayers under their breath. Such acts, and the growing public debate over allowing Jewish worship at the site — and with it militant Islamic voices in Israel calling on the faithful “to defend Al-Aqsa” — have increased tensions.

The fear, according to Nidal Othman of the Mosawa Center for the Rights of Arab Citizens of Israel, is not that the ban on Jewish prayer will be overturned. For that to happen, the Chief Rabbinate, the Ministry of Religious Services and a host of other government agencies will need to be consulted, including the Prime Minister’s Office and the Justice Ministry.

Moreover, as Othman said, the “international community would never allow it.” Jordan has historic “custodianship” of the Al-Aqsa Mosque. Futhermore, East Jerusalem  — including the Old City — is deemed by international law to be occupied territory, subject to peace negotiations with the Palestinians.

“The real fear,” says Othman, “is that there are people on the extreme [Israeli] right who are trying to draw attention to the issue and inflame the ground, for political gain.” As past events have shown, all it would take is one incident on the Temple Mount/Al-Aqsa Mosque compound for things to spiral out of control, he says.

“Such actions are a threat to public safety that could endanger lives — Jewish, Muslim, and Christian,” Othman adds wistfully.  “Even their own children’s.”