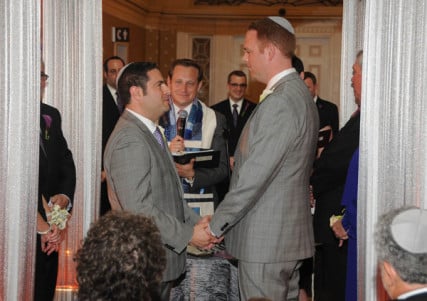 (RNS) When the Rev. Susan Russell and Lori Kizzia marry next June, they will have a small Episcopal wedding complete with traditional vows and the exchange of rings.

“If you were to follow us around with a camera, it would look like any other wedding that anyone ever planned,” said Russell, a priest at All Saints Episcopal Church in Pasadena, Calif., and a member of the national church’s Task Force on the Study of Marriage.

But a new survey has found that same-sex weddings differ in distinct ways from heterosexual nuptials, and that gay and lesbian couples also vary significantly from each other.

The survey, produced by Community Marketing & Insights, a gay research company, and The Gay Wedding Institute, questioned 916 same-sex couples in the United States who are married (57 percent), in a domestic partnership (19 percent), engaged (18 percent) or in a civil union (5 percent).

The survey found religious leaders officiated at just one in four same-sex marriages, and that only 12 percent of ceremonies were held in religious spaces.

In comparison, 35 percent of overall weddings were in a “house of worship” in 2012, according to a survey of roughly 17,500 brides by TheKnot.com and Wedding Channel.com.

David Paisley, CMI’s senior research director, said these numbers might result from a history of uncomfortable feelings between same-sex couples and many religious groups.

“For a lot of couples, they don’t know if they’re going to be accepted in a religious community, so maybe they don’t even want to go down that road to even ask,” Paisley said.

Marianne Duddy-Burke, executive director of DignityUSA, an independent gay Catholic group, said if same-sex couples could marry in the Catholic church, many would do so.

Since the Roman Catholic Church does not allow same-sex marriages, Catholic couples sometimes marry in Episcopal churches or non-religious venues. Sometimes a priest who is not officially recognized by the local diocese will preside, Duddy-Burke said.

As a growing number of states legalize same-sex marriage — Illinois will soon join 15 other states and the District of Columbia that allow it — religious couples are deciding how to fit age-old traditions with gender-specific language or rituals to their unions.

According to the survey, 66 percent of lesbians and 19 percent of gay men purchase engagement rings. Female couples are more likely that male couples to use traditions such as first dances, although less than half follow such rituals.

“There’s so much intentionality in how same-sex couples approach their weddings,” Duddy-Burke said. “They really are very thoughtful in planning every detail and deciding which pieces of traditional marriage ceremonies have meaning and which don’t.”

Some denominations are finding ways to incorporate same-sex weddings into their liturgies; Russell’s Episcopal Church approved a liturgy specifically for the blessing of same-sex relationships in 2012.

In 2011, the Committee on Jewish Law and Standards, which sets policies for the Conservative movement, also created two ceremonies for same-sex weddings. One is similar to a traditional heterosexual ceremony, but with changes to wording. The other uses three blessings instead of the traditional seven and was created to be more unique.

Both mirror ceremonies for straight couples, said Rabbi Elliott Dorff, chair of the committee. Although Conservative Judaism allows same-sex marriage, rabbis can decide whether they will officiate a same-sex ceremony.

But other churches oppose altering liturgies and prayers to have gender-neutral language.

“The service itself, the liturgy, the wording, it’s that I believe needs to reflect a biblical understanding of marriage of one man and one woman,” said the Rev. Karen Booth, director of Transforming Congregations, a conservative United Methodist group.

Although the United Methodist Church teaches that marriage is between a man and a woman, several pastors and a bishop are facing trial or formal complaints for officiating same-sex ceremonies.

It’s more uncommon for same-sex couples to have traditions that involve the giving away, such as walking down the aisle with a parent, Duddy-Burke said.

Only about half of same-sex couples embrace the words “husband” and “wife,” according to the survey. More prefer “spouse” and “partner.”

“Since we didn’t have a tradition of marriage, and since gender roles play so much in the planning of marriage, it becomes a situation where same-sex couples almost need to create their own rules,” Paisley said.