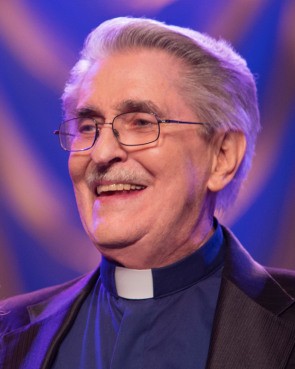 (RNS) Paul Crouch, the religious broadcaster who co-founded Trinity Broadcasting Network and was known for his prosperity gospel messages and lavish lifestyle, died Saturday (Nov. 30). He was 79.

“We are grateful for the life of this amazing servant of God,” it said. “Please pray for the Crouch family during this time.”

Crouch and his wife, Jan, started the network in a rented facility in Santa Ana, Calif., in 1973. Now based in Costa Mesa, it grew to include a “family of networks” and became the largest and most-watched Christian broadcast company in the country.

“Paul was a pioneer in Christian television; the channels and studios that Paul built around the world are an incredible achievement and will live on as a permanent legacy,” religious broadcaster Pat Robertson, founder of the rival Christian Broadcasting Network, said in a statement.

In October, Crouch was taken to a Dallas-area hospital after falling ill. By November he had returned to California, where a spokesman said his doctors were addressing “heart and related health issues.”

Crouch was the host of TBN’s “Behind the Scenes,” which gave donors updates on network activities. He and his wife also co-hosted TBN’s flagship “Praise the Lord” program, which now sometimes features other Christian celebrity hosts, such as Bishop T.D. Jakes and singer Carman, but maintains the Christian chats, guest musicians and Pentecostal fervor it has had for decades.

“Tears pour from my eyes, I’ll miss my friend but there is Joy in Heaven where millions of people are thanking him for sharing Jesus with them,” said evangelist Arthur Blessitt, who has carried a large cross around the world and was a frequent guest on TBN programs.

Crouch was an on-air evangelist but also a media magnate who expanded his television empire to several continents, including Central and South America. Both he and his wife stood out physically — especially his wife’s purple bouffant hairstyle — but their main success was a multimillion-dollar network to which popular religious broadcasters paid to air their programs.

“With his snowy white mane, he was a visibly important part of televangelistic talk shows, but he did not cultivate a flashy or controversial style of delivering his message,” said Anson Shupe, retired professor of sociology from Indiana University-Purdue University, who wrote about televangelists in the 1980s.

Crouch was born in St. Joseph, Mo., and earned a degree in theology from Central Bible Institute and Seminary in Springfield, Mo. He started his broadcasting career at an AM radio station while he was a student.

His father was an Assemblies of God minister who, along with several other family members, attended the Pentecostal denomination’s first General Council in 1914. The younger Crouch was appointed by the denomination in 1961 to oversee a film and audiovisual studio in Burbank, Calif. He was also an Assemblies of God credentialed minister from 1957 to 1975, after which he chose not to renew his credentials, the denomination said.

After four years working for the Assemblies of God, Crouch moved to radio and television stations in California in the late 1960s. He and his wife Jan, who he married in 1957, founded TBN in 1973. They had started working with Jim and Tammy Faye Bakker but after disagreements, the Bakkers headed to the East Coast to start their own television ministry.

When Jim Bakker and another 1980s televangelist, Jimmy Swaggart, both were felled by scandals, Crouch was able to reap the benefits of their losses.

Like them, Crouch also shared in controversy. In 2004, the network denied allegations of his involvement in a homosexual encounter after the Los Angeles Times reported that he reached a $425,000 settlement with a man who made the claims. Three years later, the ministry defended itself after ABC News’ “20/20” reported on luxurious living by the Crouches, including private jets and mansions.

Most recently, Crouch’s ministry has been embroiled in litigation since his granddaughter and former chief financial officer, Brittany Koper, was fired in 2011 after questioning its high-cost personal expenditures. The Times said they included the purchase of a $100,000 motor home for Jan Crouch’s dogs.

After investigations by nonprofits and journalists over the years, Paul Crouch continued to draw criticism, especially for his embrace of prosperity gospel.

“Paul Crouch at TBN is the greatest proponent of the oldest heresy in the church — that gain is godliness,” said Ole Anthony, a founder of the Dallas-based Trinity Foundation, which has investigated Crouch’s ministries and others for more than 30 years. “All of the heresy connected with that position is what they’re based on and the problem is they’ve spread that all over the world.”

As it has since its start, TBN depends on donors. In addition to original Christian TV programs and faith-based films, there are “praise-a-thons,” music-filled events that last a week or two and raise money for the commercial-free network.

Over the years, TBN has expanded to become a group of networks, including Church Channel, a digital network that features Joyce Meyer and Joel Osteen; Enlace, a Spanish-language affiliate; and “Smile of a Child,” which features children’s programming. All told, according to a ministry document, those networks air on more than 10,000 U.S. cable and broadcast affiliates.

Even Crouch’s critics acknowledged his zeal to reach the world with the gospel message via the airwaves.

“Just imagine the kind of drive it took to create this humongous network and singleness of vision,” said Anthony. “That’s what he will best be remembered for.”

Religion Hub
Russia-Ukraine war: Some pastors wonder about ‘end of days’
Follow us on Facebook!
Submit your photos to RNS