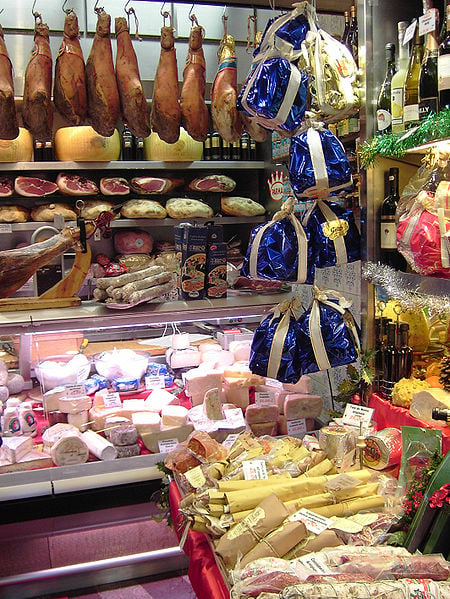 Speaking on Huffpost Live a couple of days ago, Rick Warren compared Obamacare’s contraception mandate to a law requiring Jewish deli owners to sell pork, saying that if the latter took place, “I would be out there with the rabbis protesting that. Why? I don’t have a problem with pork, but I believe in your right to not have to sell pork if it’s not in your faith.”

Let it be noted that Warren plagiarized…well, appropriated…this analogy from Archbishop William Lori, who, testifying before Congress in his capacity as chairman of the USCCB’s Ad Hoc Committee for Religious Liberty in February of last year, delivered himself of The Parable of the Kosher Deli. As I tried to make clear, the analogy didn’t work then, and it hasn’t improved with age. If I may be permitted to cannibalize myself:

“The parable imagines a new government order requiring kosher delicatessens to sell pork. The Orthodox Jews are up in arms, and the thing limps along in rough parallel to the current tale of the mandate. Yes, the government adjusts the policy a bit, but this now affects the kosher meat suppliers, and they’re not happy. You get the idea. What’s interesting about Lori’s little jeu d’esprit is not how inept the analogy is, however, but how a proper Parable of the Kosher Deli would prove the opposite of what he’s seeking to demonstrate.

“In fact, the rules of kashrut forbid Jews from eating pork, not selling it or otherwise being involved in its provision. No doubt, a mandate to sell pork would be resisted by the deli owners, but the point here–and it’s not a trivial one–is that Orthodox Jews have no objection to non-Jews eating pork, or to doing anything to help them to do so.

“So let’s imagine a more accurate analogy — one in which, for reasons of scarcity, say, places of employment were required to provide food stamps for their employees to obtain what they needed to eat. And let’s say that, as in the real world, such stamps did not cover all foodstuffs: no to Twinkies but yes to pork. Would our deli owners have any objection to providing stamps that their employees could take next door to Paddy’s Irish Pub and order a ham sandwich, or for that matter a traif plate of corned beef and cabbage? Of course not.

“And that’s the point. Orthodox Jews understand the requirement to keep kosher as a religious duty required only of their kind. The Catholic bishops feel that contraception is an evil in the world at large that they cannot be complicit in. And so rather than simply say, fine, you take your health care coverage and avail yourself of whatever legal services you’re entitled to, they say, ‘Sorry, because some of those are sins for us, we won’t pay for you to commit ’em.'”

Now, in his interview, Warren goes on to claim that “without a doubt, the Obama Administration violated the First Amendment” in issuing the contraception mandate. But as the conflicting appellate court decisions indicate, there’s all kinds of doubt concerning the right of a private employer to have his sincerely held religious beliefs shape the terms of the health coverage he provides his employees.

Suppose, for example, an employer who happens to be a Jehovah’s Witness goes to court to claim an Obamacare exemption from having to cover his employees for blood transfusions because it’s against his religion. I’d say the state’s interest in protecting life is sufficiently compelling for claim to be denied. Would Rick Warren really be out there protesting to the contrary?