North Korea Undercover: Inside the World’s Most Secret State

“Like Hitler’s Third Reich, the regime is depressingly popular with masses of North Koreans. They are joyfully in thrall to a political religion. The slavishness of its adherents reminds one of America’s death cults, but in North Korea they don’t have Kool-Aid. They have nuclear bombs.”

“Most secret state” is no exaggeration. North Korea comes in dead last on Freedom House’s global press freedom rankings and is one of eight countries committing “particularly severe violations of religious freedom,” according to the U.S. State Department.

In March, Sweeney posed as an academic to accompany his wife and a group of students to North Korea. A documentary of his trip aired on the BBC in April, and Sweeney published a book on the experience and his findings last month. This interview was edited for length and clarity.

Brian Pellot: Let’s start with some of your general impressions of North Korea. Very few foreign journalists have reported from there in recent years. Why did you go?

John Sweeney: North Korea is the darkest place on earth, both literally and metaphorically. You can actually see how dark the country is from space. It’s almost as if it isn’t even there. It’s also the darkest place I’ve ever been to in terms of information. I used to be a war reporter. I went to Ceaușescu’s Romania, Saddam’s Iraq, Gadhafi’s Libya. I’ve been to about a dozen tyrannies. In Iraq and Libya, I’d meet people who would let you know their government is full of shit. That didn’t happen in North Korea. It feels like bad science fiction there. It’s like walking inside the “The Matrix.” It’s really weird and creepy. I wanted to shed some light on this dark state to show how North Korea is using nuclear blackmail against the West. Behind the mask of this, there is an immense human rights tragedy unfolding. 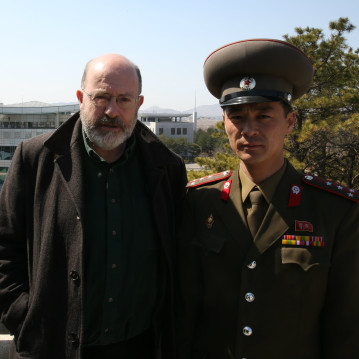 JS: North Korea is right-wing, xenophobic, elitist, very old-fashioned and rooted in the past. North Koreans have never known anything like free speech or democracy, they’ve only ever known this oppressive form.

In the past, the kings of North Korea were considered gods. Today it feels like the three Kims are considered gods. Kim il-sung was God the Father, Kim Jong-il God the Son, and the current Kim Jong-un is God the Grandson, Fat Boy Kim. The three of them are venerated, and it definitely feels like a political religion. These beliefs are reinforced through murder and gulags and by denying people genuine religious freedom. There are official Catholic and Protestant churches in the country, but I believe those are shams. I met no one in North Korea who espoused any religious preference, but maybe that’s because we were never allowed to go anywhere on our own.

BP: What’s some of the most striking or significant iconography you saw around this political religion?

JS: There are vast billboards on the sides of roads with God the Father Kim Il-sung smiling like Doris Day and Kim Jong-il smiling behind him. There are statues of the men everywhere. This deification is constant.

[tweetable]This is a zombie state ruled by a zombie, the only necrocracy in the world.[/tweetable] Kim il-Sung is the reigning president, even though he’s been dead since 1994. I met people who talk about the joy of meeting Kim Il-sung. He presided over a famine where 3 million people died and yet he’s venerated. We went to where his body is interned and were asked to bow in front of a dead man, a waxwork. It’s hideous. I have respect for other people’s belief in God, but I found this to be foul. This was the only place where the power was on and it was comfortably air-conditioned. In hospitals, factories and restaurants there were power cuts, everywhere apart from where the dead gods live. 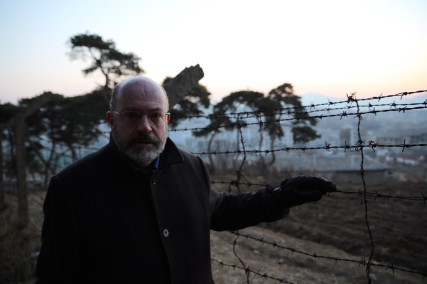 John Sweeney at a fence in North Korea

JS: Whichever goon drew up the constitution probably saw that religious freedom was fashionable and proper in other constitutions, but it’s a lie. There is no freedom of expression and no freedom of belief. It is a totalitarian state, a three-generation tyranny, in which no one is allowed to profess their love of god in any way they wish, and that is evil. It sounds like you’re assuming there is some sort of impediment to freedom of religion specifically, when actually there is just no freedom whatsoever.

BP: Why is this freedom so restricted in the country? Because the state fears that religious allegiances might challenge their political authority?

JS: I believe everyone has the right to believe, but also the right to scrutinze and mock others’ beliefs. Tyrannies and dictatorships don’t like mockery or humor, which is the great antidote to totalitarian mindsets.

Funnily enough, Kim Il-sung’s family was Presbyterian. Now Christianity is almost a kind of guerrilla religion in North Korea. Certainly under Japanese occupation, Christianity became a valid option for pro-nationalist people. But Christian messages like love thy neighbor, turn the other cheek, all of these things question the nature of political power. There’s a lot of subversion in the Bible and Buddhism, and there are anti-state messages in Confucianism. All of this has been replaced by deification of the Kim family.

BP: What do you think of external efforts to bring religion into the country, like the Colorado-based Christian group that’s dropping thousands of Bibles over North Korea? Given that North Koreans can be punished if caught with a Bible, don’t efforts like this put people in danger?

JS: It’s a kind of message, that there are people out there, on the other side of the fence, who don’t agree with the government. And that’s good. We shouldn’t blame Christians for trying to get their message out. It’s difficult territory, but I believe it’s the North Korean government’s fault for torturing people who pick up these Bibles, not the fault of those who send them. In a different context, Aung San Suu Kyi once said, “use your liberty to promote ours.” I think that applies here as it did in Burma.

A lot of the effort in standing up to the North Korean regime is coming from Christians. Good on them. President Reagan said in West Berlin, “Mr. Gorbachev, tear down this wall.” None of the main international actors in the North Korean tragedy, namely South Korea, China, Japan, and the U.S., are saying with the same moral clarity that Reagan did, “tear down this wall.” I think all the big powers have been afraid of transition in a nuclear-armed state. They prefer stasis to dangerous change, or change that may bring danger.

Christians are some of the bravest people in North Korea and among those working outside the state. When the truth is free, when the regime falls, we’ll better understand how people of different faiths operated. It’s my sense that there are Christians in North Korea whose true story, when it can be written, will be a great and moving testimony of courage.