Pope Francis says so many touching and interesting and groundbreaking things when he gives interviews that even some fascinating bits can get overlooked amid the daily tide of coverage of the pontiff and the Vatican.

A case in point was this passage from an interview in Sunday’s La Stampa that he gave to Vaticanista Andrea Tornielli. In response to a question about those suffering from hunger Francis replied:

There are so many children that cry because they are hungry. At the Wednesday General Audience the other day there was a young mother behind one of the barriers with a baby that was just a few months old. The child was crying its eyes out as I came past.

The mother was caressing it. I said to her: “Madam, I think the child’s hungry.”

“Please give it something to eat!” I said.

She was shy and didn’t want to breastfeed in public, while the Pope was passing. I wish to say the same to humanity: give people something to eat! That woman had milk to give to her child; we have enough food in the world to feed everyone.

So Francis is backing breastfeeding in public! That is sure to warm of pro-nursing feminists and maybe raise a few eyebrows among the traditional set. 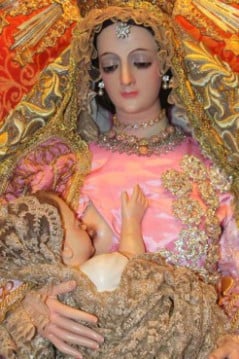 But is the pope’s suggestion really a novelty? It may be more in keeping with popular tradition. Indeed, the earliest symbol of God’s love for humanity was the infant Jesus at Mary’s breast — as shown in a fresco in the Catacombs of Priscilla that was just restored, a project that elicited more commentary about what another fresco may (or may not) have indicated about women priests than about Maria Lactans, as she is known.

What a lovely image — and the St. Peter’s List blog recently posted 20 of them — especially at Christmas time. Yet it was erased even from Catholic imagery after the Protestant Reformation.

As I wrote in a story a year ago about the curious history of breastfeeding Mary:

The cultural shift was so great that even Catholics soon came to regard the breast as an “inappropriate” image for churches. Instead, the sacrifice of the cross – the suffering Jesus – became the dominant motif of Christianity while the Nativity was sanitized into a Hallmark card.

“Ask anybody in the street what’s the primary Christian symbol and they would say the crucifixion,” said Margaret Miles, author of “A Complex Delight: The Secularization of the Breast, 1350-1750,” a book that traces the disappearance of the image of the breast-feeding Mary after the Renaissance.

It was all deeply moving to believers of the day, though perhaps too much of a good thing even then. Miesel says that a century before the Reformation, St. Bernardine of Siena quipped that “Mary must have given more milk than a hundred cows.”

Yet once the breast became an object of medical and sexual interest, it quickly vanished as an object of sacred desire.

Can Pope Francis bring it back?