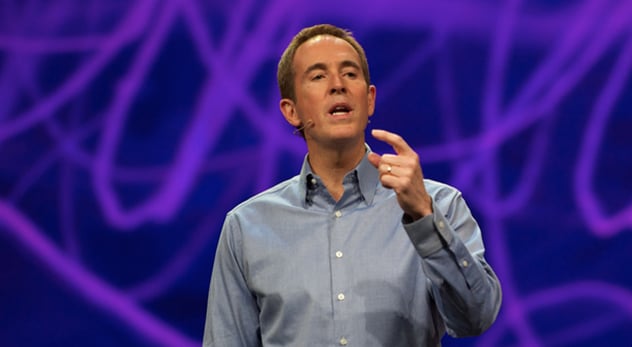 The mega-church pastor has a new message about poverty, wealth, and the prosperity gospel. – Image courtesy of Willow Creek D/CH (http://bit.ly/1cRGazE)

In his new book, “How to Be Rich”, pastor Andy Stanley has a message for American Christians: “You’re wealthy. Now starting acting like it.”

Don’t be fooled by the title; this is not another book purporting that God wants to bless all his followers with a diamond-studded Rolex, fully-loaded Benz, and their best life now. Stanley, bestselling author and pastor of one of the largest churches in America, begins with the premise that most Americans are richer than they realize and offers advice on how to be more generous. “How to Be Rich” is typical Stanley, which is to say, it is chock full of sticky one-liners and helpful practical tips. It’s a fresh take on how to leverage one’s wealth for the good of others, and is well worth reading.

Here, I talk to Stanley about poverty, wealth, the prosperity gospel, and how to make 2014 your best year ever.

RNS: I imagine when many people hear that a Christian pastor has written a book called “How to Be Rich,” they might associate it with the so-called “prosperity gospel.” But that’s not what you’re trying to do here. How is your message different?

AS: It’s actually the opposite of the prosperity gospel. The prosperity message is “Give and it will be given unto you.” This message is, “It has already been given unto us. Now it is our turn to give.” I don’t need to give one to get 10. I live in the United State of America, so I already have my 10. So this book is written to Americans primarily to rethink what they have, to rethink their wealth in the context of our global economy. We are so incredibly well off, but we are so fascinated and consumed with what we don’t have. And because most Americans don’t actually have any margin, most Americans don’t feel as rich as they actually are. So I hope to shake up some thinking a little bit and get people to step back and begin thinking and acting like rich people, because in fact, most of us are.

RNS: But “give and it will be given unto you” is a Biblical message, though, isn’t it?

AS: Yeah. I didn’t mean to reference an actual passage of scripture when referring to the prosperity gospel because I’m so completely against that. The idea of getting people to give so that God will bless them, I have never ever purposely or consciously leveraged that in my preaching or teaching because, again, in the context of what’s happening for most Americans, that’s just silly.

RNS: The book says that generosity was the hallmark of early church, and this was one of the keys to their success. What do you think the Christian church in America is known for today, and how is that helping or hindering our ability to impact culture?

AS: Well, you and I both know there have been some excellent books written on that and lots of research done by people who spend their lives trying to answer that question. American Christians are definitely not known for our generosity. When people hear the word “church” or hear the word “Christians” the first thing that comes to mind is not “Wow! That’s the most generous group of people I know of.”

That’s unfortunate because, again, it was the hallmark of the first century church who had no political standing or social leverage. There’s that piece of church history that was dark. Not dark in a negative sense, but there’s just not a lot of information. The first 100 or 150 years of Christianity, we don’t know much about. But what we do know is that these Christians took Jesus’ teachings, especially the Sermon on the Mount very literally. They did unto others as they would have others do unto them. They took in children. They actually prayed for their enemies. And their ethic of generosity was in such stark contrast to the Greco-Roman world where you did unto those who could do something for you. That’s not the whole story of the first century church, but it is part of the story. And I think American Christians have an opportunity to replicate that and regain our standing in culture.

RNS: Jesus begins his ministry by proclaiming good news to the poor, he advocated for the poor and he was suspicious of wealth–like when he said, “it is easier for a camel to go through the eye of a needle than for a rich man to enter the kingdom of heaven.” Is that message more difficult to preach in a society like the U.S.? Are these biblical themes of helping the poor, and the danger of wealth, “hidden in plain sight” for many?

No matter where you stand on the economy, we live in the richest time of the richest nation in history. In fact, if you can read this interview, you’re automatically rich by global standards. And it’s not just because you can read, but because you’ve been given individual freedom to do so, not to mention the time.

What we call “poverty” today would have been considered middle class just a few generations ago. In 2000, the average “poor” family had goods and services rivaling middle-class families of the 1970’s. In addition, most poor families don’t stay poor. Over the sixteen-year period tracked by one study, 95% of the families in the lowest income quintile climbed the economic ladder to higher quintiles. As Michael Cox, an economist with the Federal Reserve, noted, “The rich may have gotten a little richer, but the poor have gotten much richer.”

So my purpose in writing this book is to help rich Jesus-followers get better at being rich. Even if we’re not convinced we’re rich, we all probably hope to be. And should we ever admit that we have, in fact, crossed that imaginary line, I want us to be good at it. After all, most rich people aren’t.

RNS: You say, “it’s not what you have, but what you do with what you have” that really matters. How do you and your wife determine where you’ll allocate your own charitable giving?

AS: That’s a great question. Because I’m a Baptist pastor’s kid, I was raised to tithe. I’ve never not tithed. It’s not so much a spiritual discipline as much as just something I was raised to do. It’s always been easy to give the first 10% of any money I get from any source. And my wife Sandra was raised the same way. That’s just been our lifestyle.

But when we were married and began to travel and began to see the world, our hearts were just ripped open. Just like a lot of people’s are, especially when they travel to third world countries and see the plight of children. So for our family, we have always tithed to our local church and then in addition to that, we’re always in partnership with at least two non-profit organizations that do something related to children. And that’s just us.

I always tell people, “You need to find something you’re passionate about. And don’t give a little bit to a lot of organizations. Find a couple of organizations that you can really fall in love with–both what they do and how they do it.” Actually read their newsletters and emails and keep up with what they’re doing. Become aware of the issue and what the organization is doing to address it.

One of my favorite parts of this book is the section on discontentment. You know, awareness breeds discontentment. And Christians can leverage that for us or against us. You can walk into a store and see all the “stuff” and suddenly you are aware of what you don’t have and discontent with what you do have. At the same time, you can go to a third world country on a mission trip and suddenly you are aware of what other people don’t have and it impacts your heart in the same way. So awareness drives discontentment. Why not use that same principle to drive your generosity?

RNS: A lot of people, particularly in the digital age, get discouraged when it comes to generosity because they are confronted with so much need in the world today. How do you encourage people to not grow cynical in the face of so much suffering and need?

AS: That’s a great question, and the short answer is that Christians don’t give because the problem will be solved. We give because we’ve been commanded to give and we give because so much has been given to us. Remember the first century church again. The first generations of Christians came and went and saw no progress from their generosity but God used that to reshape the way the world thought about Christians and compassion.

Generosity is to flow from us the same way forgiveness or kindness does or any Christian virtue. [tweetable]The reason I do anything for anyone else is because of what was done for me by God through Christ.[/tweetable] We don’t give to solve problems or to build buildings or to get all the children fed or fostered or adopted. That is what keeps us from getting cynical and that is what keeps our hands wide open.

RNS: We’re coming up on 2014. A lot of people hope they will “be rich” this year, probably in the way you use it and the more literal sense too. If someone told you they wanted 2014 to be the best year of their life, what piece of practical advice would you give them?