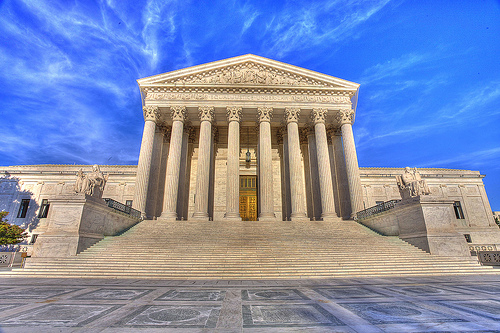 In what may be a landmark religious freedom case, the U.S. Supreme Court is considering business owners' efforts to avoid the Obamacare mandate to provide insurance coverage for birth control methods they consider abortifacient.
January 3, 2014
David Gibson

(RNS) The Obama administration and faith-based foes of an employer mandate to provide free birth control coverage continued their legal tussle on Friday (Jan 3.), though with an odd twist: The Justice Department says an order of nuns is exempt from the mandate, while the nuns’ lawyers say they are not.

The latest chapter in the contraception mandate began on New Year’s Eve when Supreme Court Justice Sonia Sotomayor issued a temporary injunction against the regulation on behalf of the Little Sisters of the Poor, a U.S.-based Catholic order that operates nursing homes for the poor around the world.

The mandate was to go into effect on Jan. 1, but Sotomayor gave the administration until Friday to file a response to the sisters’ claims. Solicitor General Donald B. Verrilli Jr. said the nuns needed no relief because they had no problem — they are already exempt from the mandate, as is their insurance company. All they need to do is let the government know.

“With the stroke of their own pen, applicants can secure for themselves the relief they seek from this Court — an exemption from the requirements of the contraceptive-coverage provision — and the employer-applicants’ employees (and their family members) will not receive contraceptive coverage through the plan’s third-party administrator either,” Verrilli wrote.

But lawyers for the Becket Fund, a religious freedom advocacy group that is representing the nuns and other religious groups opposing the mandate, argued that the government is wrong about its own legal case.

They said that if the sisters certify that they are exempt, they will in fact be allowing their employees to receive contraception coverage through another provider. If they don’t certify that they are exempt, the nuns argue they will be subject to millions of dollars in “crippling” fines – despite the administration’s assertions that the nuns will not face penalties.

“I think they’re just trying to fool the press, frankly,” Becket Fund attorney Eric Rassbach told reporters in a conference call on Friday afternoon. The Becket Fund was to file a formal response to the Justice department argument late Friday.

Cases involving faith-based groups are working their way through the appeals courts and have not yet reached the Supreme Court. The high court has accepted cases argued by for-profit companies that say the religious beliefs of their owners require an exemption to the contraception mandate.

Those for-profit cases are likely to be decided by June, and it is unclear whether the Supreme Court will also try to rule on the claims of faith-based groups this year as well.

The Obama administration has provided an exemption from the mandate for religious groups. For religiously-affiliated entities, like faith-based universities or hospitals, the administration worked out an accommodation by which the organization does not have to provide or pay for contraception coverage. Instead a third-party administrator contacts the employee and sets up coverage and pays for it.

Some of those accommodated entities have agreed to that arrangement while others are fighting it in court.