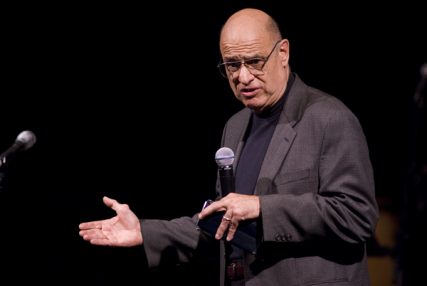 Tony Campolo, a progressive evangelical leader who has counseled President Bill Clinton since the Monica Lewinsky scandal, has announced that the organization he founded nearly 40 years ago will close on June 30. Pictured here, Campolo speaks with guests after the Northminster Baptist Church preaching conference. Photo courtesy Tony Campolo

(RNS) Tony Campolo, a progressive evangelical leader who counseled President Bill Clinton through the Monica Lewinsky scandal, announced Tuesday (Jan. 14) that the organization he founded nearly 40 years ago will close on June 30.

Campolo, 78, plans to retire with the closure of the Evangelical Association for the Promotion of Education, but he will continue to write and speak, with nearly 200 engagements scheduled for 2014. He said his health is fine and he wants to write one more book on how Christianity fits with the social sciences.

By June, Campolo said he anticipates there will be about $300,000 left to distribute to the offshoot ministries started by the larger EAPE. The 22 ministries that were started under EAPE now operate independently and will continue, including Red Letter Christians, where Campolo plans to spend most of his time.

Campolo, who ran for Congress in 1976 as a Democrat, considers himself to be theologically conservative but socially progressive. He is against legalized abortion and gay marriage while being progressive on issues related to poverty, race and American diplomacy.

While not embracing same-sex marriage, Campolo has said the two sides could find a detente if the government would “get out of the business of marrying people and, instead, only give legal status to civil unions.”

He still maintains his counselor relationship to Clinton, speaking with the former president about prayer and Bible study every couple of months. He said he is not in touch with the current Obama administration, despite being invited to an initial gathering of clergy. “To pastor one great leader in America at a time is enough for any person,” he said.

Several evangelical leaders have passed their ministries on to their children, including Billy Graham, Oral Roberts and Jerry Falwell. But Campolo said that wasn’t the case with his son, Bart, who left EAPE in 2011 to start his own urban ministry in Cincinnati.

“My son made it clear to me that he didn’t want to be responsible to carry on the old man’s work. I think I can understand that,” Campolo said. “My son’s theology has drifted to the left when EAPE is definitely evangelical.”

Campolo said he expects to partner more with Shane Claiborne, a Campolo acolyte at Eastern University in St. Davids, Pa., who is an activist advocating for nonviolence, serving the poor and living simply.

“Too often, we old guys hang on too long and steal the spotlight from the new, bright, shining stars emerging as speakers and leaders,” Campolo said. “We keep occupying leadership without stepping aside and getting behind these speakers.”

Campolo and other progressive evangelicals like Ron Sider and Jim Wallis have taught evangelicals how to speak the language of social justice, said David Swartz, a history professor at Asbury University and author of the book “Moral Minority: The Evangelical Left in an Age of Conservatism.”

Campolo estimates that 95 percent of the giving to EAPE was due to his speaking engagements, a trend that would be difficult to pass down to a successor.

“A lot of these evangelical organizations are built by big gregarious personalities like Tony Campolo’s,” Swartz said. “You can’t really pass down a personality.”

Campolo has been a dynamic speaker, startling people to make a point.

Campolo believes evangelicals have woken up to issues related to social justice. He said the last time he checked, the number of children who die each day due to malnutrition has gone down to 19,000. And more people have access to clean water due to well digging, thanks in part to the work churches have done.

News
Biden campaign labels racism as religious issue at post-debate event
News
In Oregon, churches and anti-fascists unite to provide mutual aid to fire evacuees and others in need
News
Trump announces new Supreme Court justice options in apparent appeal to religious base
News
Longtime professor Jim Spiegel out at Taylor University after ‘Little Hitler’ video
Opinion
Why evangelicals will support Donald Trump in 2020
© Copyright 2020, Religion News Service. All rights reserved. Use of and/or registration on any portion of this site constitutes acceptance of our User Agreement and Privacy Policy, Privacy Statement and Cookie Notice. The material on this site may not be reproduced, distributed, transmitted, cached or otherwise used, except with the prior written permission of Religion News Service.