In a warm review last week of David Bentley Hart’s impressive new book, “The Experience of God: Being, Consciousness, Bliss,” Damon Linker praises Hart for demolishing the “facile, self-satisfied position” of the commonplace atheist argument that “relies on a straw man account of God for its cogency.”

Yet Linker is out this week with a straw man — actually a liberal Catholic straw woman — of his own that is sparking lots of debate and some nodding from conservatives (see the New York Times’ Ross Douthat here). I think he does the straw woman, and Pope Francis, a disservice.

Let me start from the beginning:

Linker is a former editor at First Things, author of fine books on religion and politics, and a prolific commentator — one who is always worth reading. So it was nice to see the Hart review mentioned above (in The Week) in part because it balanced out, in my mind, an unusually misbegotten analysis about Pope Francis last August in The New Republic.

In that essay Linker broke the news to those poor, deluded “liberal Catholics” like Andrew Sullivan (huh?) who confused the new pope’s new style and outreach and focus with an impending change in doctrines on sexuality.

As Linker wrote then:

Francis’s renewed emphasis on the poor is certainly welcome and valuable, and there are circumscribed areas in which the Pope may achieve real reforms. But when progressive Catholics pine for change, they mostly mean that they want to see the Church brought into conformity with the egalitarian ethos of modern liberalism, including its embrace of gay rights, sexual freedom, and gender equality. And that simply isn’t going to happen.

Well, that’s actually not what progressive Catholics tend to mean — their Catholicism is about faith, above all, and social justice and caring for all, womb to tomb (Linker may have forgotten about that notorious liberal Catholic, Cardinal Joseph Bernardin and his “consistent ethic of life).

They do tend to want optional celibacy and women priests (and by the way, so do plenty of “conservative” Catholics) and equal treatment for gay Catholics. But they don’t expect such things to happen overnight, and Francis is changing the tenor of the church’s approach on these questions.

In short, Linker seemed to be setting up the very kind of straw man argument that he rightly and effectively dismissed in agreeing with David Bentley Hart.

So it was encouraging to see Linker come back this week in The Week with what looked to be a reconsideration of his original column. Alas, it was not to be. He stuck by his original arguments (including, in the face of much evidence to the contrary, the notion that Francis would not be able to reform the Curia). There was one exception:

After reading an endless stream of gushing commentary by liberal Catholics on Pope Francis, I’m beginning to wonder if they ever really cared about reforming doctrine in the first place.

Ah, those liberal Catholics — they just keep loving the singer and ignoring the song! (Sort of like conservative Catholics who ignore or edit papal teachings on the economy and such?) And for proof Linker cited Trish, a caller to an NPR program he was on. Of course, one Catholic makes a legit sample — or straw (wo)man. And “Trish from Kentucky” told Linker that the pope’s welcoming words are “everything.”

“Catholics do not care about doctrine,” she said, adding, “It’s irrelevant. It’s a non-issue for Catholics.”

So that’s it. Linker realizes that liberal Catholics (because they are all like Trish) just ignore Catholicism. He concludes:

If Trish is the future of American Catholicism, we appear to be left with a puzzle: When does a church without a doctrine cease to be a church at all?

Over at dotCommonweal, Grant Gallicho dings Linker’s numerous misperceptions, including his failure to realize that most Catholics are “ecclesiastical realists.” And, he says, “Linker confuses two kinds of Catholic: the activist and the average Mass-goer.” Yup.

Beyond that, I’d note that Linker also seems to have ignored the pope’s own words about change in the church, like those in his landmark interview with the Rev. Antonio Spadaro in Civilta Cattolica, a Jesuit journal. In that interview Francis spoke about his affinity for Pope John XXIII and the changes he introduced, and for the process of “discernment” that “lay(s) the foundations for real, effective change.”

Most important: I would add that if “Trish from Kentucky” was overstating the case against doctrine or, just maybe, if she didn’t have a fully articulated exposition of Catholic teaching on doctrine and levels of authority, her spirit was probably in the right place — which is to say it was with most Catholics and Pope Francis himself.

To wit, Francis himself has repeatedly and insistently condemned a pharisaical approach to doctrine, to religion as fastidious rule-following and faith formation as a “police action.” Such a doctrinaire style creates “little monsters” and “abstract ideologists or fundamentalists,” Francis has said.

Or, as he put it in his interview with Spadaro:

“If the Christian is a restorationist, a legalist, if he wants everything clear and safe, then he will find nothing. Tradition and memory of the past must help us to have the courage to open up new areas to God. Those who today always look for disciplinarian solutions, those who long for an exaggerated doctrinal ‘security,’ those who stubbornly try to recover a past that no longer exists­—they have a static and inward-directed view of things. In this way, faith becomes an ideology among other ideologies. I have a dogmatic certainty: God is in every person’s life.”

“If a person says that he met God with total certainty and is not touched by a margin of uncertainty, then this is not good. For me, this is an important key. If one has the answers to all the questions—that is the proof that God is not with him. It means that he is a false prophet using religion for himself. The great leaders of the people of God, like Moses, have always left room for doubt. You must leave room for the Lord, not for our certainties; we must be humble.”

“The dogmatic and moral teachings of the church are not all equivalent. The church’s pastoral ministry cannot be obsessed with the transmission of a disjointed multitude of doctrines to be imposed insistently. Proclamation in a missionary style focuses on the essentials, on the necessary things: this is also what fascinates and attracts more, what makes the heart burn, as it did for the disciples at Emmaus. We have to find a new balance; otherwise even the moral edifice of the church is likely to fall like a house of cards, losing the freshness and fragrance of the Gospel. The proposal of the Gospel must be more simple, profound, radiant. It is from this proposition that the moral consequences then flow.”

It is about the person first, and foremost — or, as Spadaro told James Carroll for a magnum popus on Francis in the New Yorker:

“Style is not just the cover of the book,” he declared. “It’s the book itself!” He continued, “Style is the message. The substance is the Gospel. This is what the Gospel looks like.”

Trish would recognize that, I suspect. Whether Francis will ultimately disappoint her, who knows. If she does wind up crestfallen, she’ll have plenty of disillusioned company on the Catholic right. 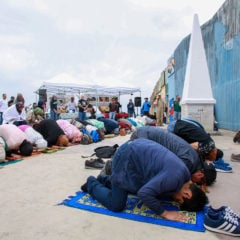