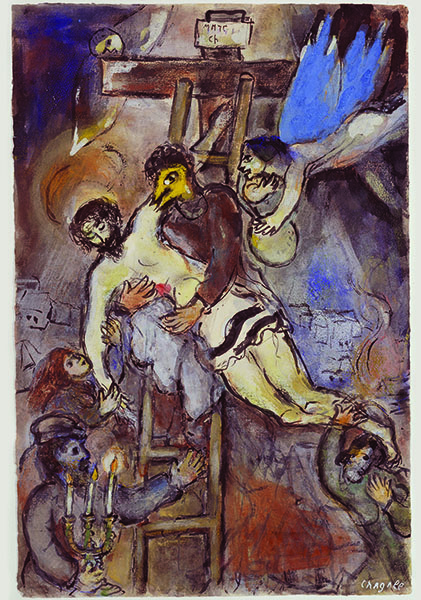 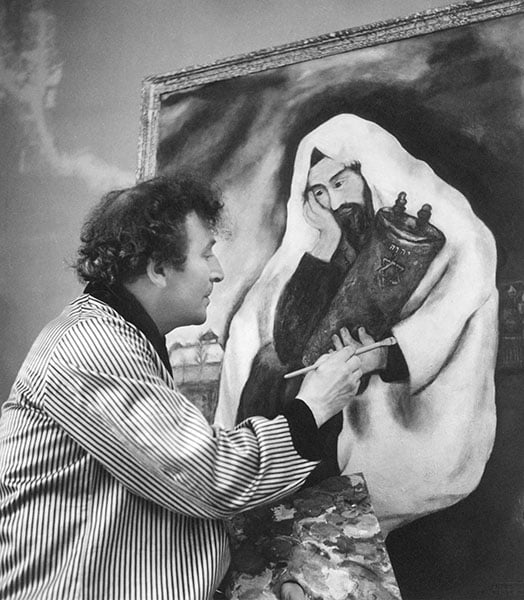 NEW YORK (RNS) At a moment when the world is flush with new books and ever-evolving interpretations of Jesus, one of the last century's artistic masters is providing art lovers with a striking take on the first-century religious figure.

"Chagall: Love, War, and Exile," at The Jewish Museum in New York showcases the work of the Russian-French artist during World War II as he tried to make sense of a world gone mad.

Of particular interest are paintings depicting the crucified Jesus -- depictions that are often read as metaphors not only for war but the particular expressions of Jewish suffering and persecution in Europe during the 1930s and 1940s.

These somber, often brooding, paintings were unusual for a Jewish artist who, before and after the war, was celebrated for his bold colors and acclaimed for his humanistic warmth, and sometimes criticized for his perceived sentimentality.

The works on display through Feb. 2, signal an alarm and warning, as art historian Kenneth E. Silver wrote in an essay featured in the exhibit's catalog. Chagall, Silver noted, "could demonstrate not only to Jews but also -- perhaps primarily -- to Gentiles that what was being done to modern Jews had a direct parallel in the fate of Jesus, cruelly misunderstood and executed for his outsider status."

He added: "Perhaps more than anything else, it was the image of Jesus Christ as a Man of Sorrows -- a sufferer -- that made him the exemplary Jew."

And yet, the paintings defy easy classification or labels. In some ways, they can appear to straddle different understandings and readings of the figure of Jesus, a Jew who came to be worshipped by Christians as the Messiah and a symbol of oppression to Jews because of the violence inflicted by his followers. In Chagall’s work, Jews may recognize Jesus because he wears the tallit, or prayer shawl, as a loincloth; Christians will recognize his haloed head.

For some, the exhibit will have lasting echoes beyond its early February closing. This year marks the 100th anniversary of the start of World War I, the event that laid the groundwork for World War II and changed life forever in Europe.

It forced Chagall to leave the Soviet Union for France and then the United States. (He returned to France after World War II.)

One painting among many captures the catastrophe of the times. As Susan Tumarkin Goodman, the museum's senior curator emerita, noted, "Christ in the Night" (1948), with its arresting and somber blue palate, is a work of "immeasurable pathos. By the time this work was completed, the fate of Europe's Jews was well known and the crucified Jesus had become a symbol of the murdered millions."

In an interview, Goodman said that given what Chagall experienced "and what he absorbed, all of this enters into the work," including the death of his beloved wife, Bella, in 1944.

And in her conclusion to the exhibit's catalog, Goodman said, “He offered a narrative art that met the psychological needs of the moment and gave pleasure and consolation as could no other artist."

Jesus became a lifelong obsession for Chagall, and not isolated to the tragic era of the 1930s and 1940s.

Yet, the "back story" and history of the works should not overburden the essential mystery of Chagall's artistry or his gift to the world -- the poetry of expression.

In short, it's the art that counts.

September 21, 2020
Related Posts
By Alejandra Molina
In Oregon, churches and anti-fascists unite to provide mutual aid to fire evacuees and others in need
By Jeffrey Salkin
The most Jewish thing that Ruth Bader Ginsburg ever did
By Yonat Shimron
Ruth Bader Ginsburg, who died Friday, was shaped by her minority faith
By Jeffrey Salkin
COVID has led us all into sin
By Alejandra Molina
600 faith leaders sign letter urging California governor to stop transfer of incarcerated people to ICE