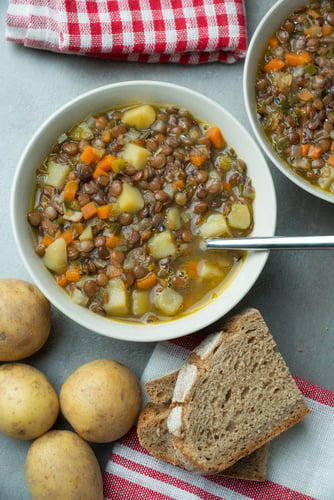 On Saturday afternoon I made butternut squash soup and spinach calzones, two of my favorite dishes. We were eight for dinner that night, and at least two of the guests were vegetarians.

Every time I have vegetarians to my house I feel ashamed of myself. If you’ve read Flunking Sainthood, you’ll know that I tried for that book to be a vegetarian because I believe in it: it’s better for animals, obviously, but also better for the planet and for me.

I’ve never been quite able to do it, though. I’ve cut back some on meat consumption, but it’s like I can progress only so far and then I just have to devour a cheeseburger.

I feel bad about this. [tweetable]In addition to the moral and health benefits of vegetarianism, I have an additional reason why I should stop eating meat, and that reason is that I’m a Mormon.[/tweetable]

We Mormons have a remarkably selective interpretation of the scripture that makes up our Word of Wisdom, the dietary code that we follow religiously. We obey the restrictions against hot drinks, alcohol, and tobacco but studiously ignore a key component of the scripture passage: that meat is only for rare circumstances. 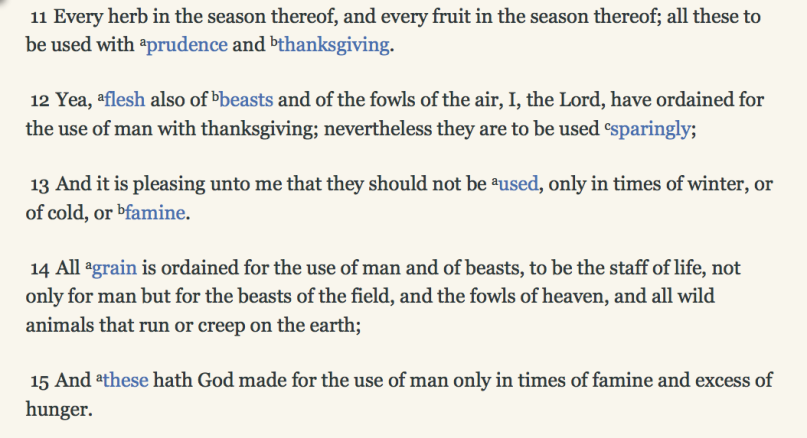 As you can see from the scripture, the Word of Wisdom emphasizes not once but twice that meat is to be reserved for unusual situations like famine or winter—when, in pre-Kroger days, garden produce and even some grains would be unavailable. Verse 15 functions like a reminder: “Did you catch what we said in verse 13? That we should only be eating animals if there’s nothing else around to prevent us from starving?”

And yet the Mormon-American subculture is all about meat: the ward’s annual chili-cookoff and turkey dinner at Christmas; the slow-cooked pot roast that you can put in the oven at 300 degrees before leaving for church and take out four hours later when you arrive home, tired and hungry.

That’s a great recipe, by the way. The beef comes out so tender and delicious you don’t even need a knife . . . . But there I go again, thinking rapturously about eating something that used to be a sentient cow with thoughts and feelings, an animal that my Mormon scripture specifically tells me not to eat because I already have plenty of pinto beans in my damn food storage and therefore no excuse.

The Mormon people have always been a little bit divided about the meat question. Some of our leaders tried mightily to get people to stop eating animals:

But another strand within Mormonism seems to have carried the day, one that emphasized our people’s carnivorous devotion. My well-worn Mormon cookbooks contain untold recipes for 100 things to do with a chicken, an unqualified predilection that carries over into more official realms. For example, a 1977 Ensign article on the Word of Wisdom balanced D&C 89’s heavy restrictions on meat with D&C 49, which taught that “the Word of Wisdom does not advocate total vegetarianism.” Meat, the 1977 article clarified, was an important source of protein, while “a diet which relies totally on grains, fruits, and vegetables usually means protein deficiency.”

Joseph Smith once taught that his policy was to give the Mormons good principles and let us govern ourselves. I love that theory and its emphasis on trust and individual agency; in practice, however, I also know how quickly my vegetarian ideals get thrown out the window when I catch a whiff of bacon.