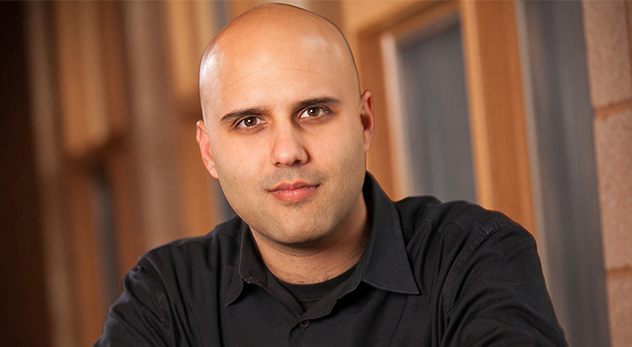 Jethani has occupied numerous roles at Christianity Today International, a leading communications ministry launched by Billy Graham in 1956, including serving as Executive Editor of “Leadership Journal.” Now the author is challenging many Christians’ visions of the future in his new book “Futureville: Discover Your Purpose for Today by Reimagining Tomorrow.”  Here, we discuss how he thinks many believers have gotten their views of the future wrong and how revisiting the idea could change their lives.

RNS: You’ve written an entire book arguing the importance of “our vision of the future.” But doesn’t the Bible tell us not to worry about tomorrow? How do you reconcile this message with the one in your book?

SJ: What may surprise readers is that “Futureville” isn’t really about the future; it’s about today and how our view of the future influences the way we live right now. We all make decisions today based on what we believe about the future. A law firm here in Chicago erected a billboard that says, “Life’s Short. Get a Divorce.” Behind that message is a vision of the future–death is final so maximize your pleasure while you can. My concern is that many Christians hold an un-Christian vision of the future, and it is negatively influencing their engagement in the world today as well as our culture’s perception of Christians.

We should also remember that there is a difference between living in light of tomorrow and worrying about tomorrow. In the same sermon where Jesus says, “Do not be anxious about tomorrow” he also tells the story of a foolish man who lacked the foresight to built his house upon solid ground. Jesus clearly wants his people to live wisely with the future in mind while also fully trusting him for their wellbeing both today and tomorrow.

RNS: There are a lot of visions about the future that Christians hold. Some believe in the destruction of the earth with giant fireballs, for example, while others believe that God’s going to restore the current earth. Can you talk in specifics about what you believe the Bible teaches about the future?

SJ: Theologians use the language of “continuity” and “discontinuity” to describe these two views. Continuity says that our present world will gradually become the perfected creation we see in Revelation 21-22 primarily through human effort. Discontinuity, which is a far more popular view in the North American church today, argues for the utter destruction and replacement of the present world with only the redeemed people of God making it safely off this sinking ship.

I believe Scripture presents a future that is both continuous and discontinuous with the present world. In passages like 1 Corinthians 15, Paul identifies Jesus’ resurrection as the “first fruits” for the coming redemption of “all things.” Looking at Jesus’ resurrected body we see discontinuity–his body is changed and exhibits new qualities and characteristics. But we also see clear continuity–it is still his same body with the wounds of crucifixion. His body was raised not replaced. He was resurrected not reincarnated.

If this is the model for the redemption that awaits both us and the earth, as Paul says in Romans 8, then it seems many things from the present world will endure to the next. This means much of what we do, create, and pursue in this world will be preserved for the next.

RNS: A lot of Christians’ views of the future seem to devalue the present. They see “heaven” in the distance and that’s really all that matters. For them, life on earth seems to be filler. But you argue that glimpsing the future should have the opposite effect, shaping how we live today. Can you explain the difference?

SJ: Oliver Wendell Holmes famously said, “Some people are so heavenly minded that they are no earthly good.” This criticism applies to Christians who believe this world has no enduring value. Why bother creating beautiful art, just governments, or efficient businesses if it’s all going to burn? It is also this view that leads some Christian communities to elevate ministry leaders and their callings to an unhealthy level–after all, pastors and missionaries are focused on the things of heaven while the rest of us merely toil on a doomed earth.

When we come to see that Scripture envisions a redeemed earth, not a replaced earth, and the union of heaven and earth, not escaping to heaven from earth, then everything changes. With this corrected vision of the future we can begin to see the eternal value of what we are doing here and now. Ironically, in the evangelical culture today, we’ve abandoned a theology of vocation and we’ve returned to a heretical view of clergy with celebrity pastors and a servant-class laity. This is the direct product of our warped vision of the future.

RNS: In the book, you devote a chapter to resurrection. A lot of Christians I know see the resurrection as nothing more than a historical event that happened a long time ago. But you argue that it has a surprising relevance for today. How so?

SJ: The resurrection was a historical event and it did happen a long time ago, but its significance is often lost on us or at least severely limited. Christians worship on Sunday because Jesus was raised on a Sunday. But why? According to the Jewish creation account in Genesis 1, Sunday was the first day of creation. Likewise, Resurrection Sunday was the first day of God’s new creation that began with Jesus and which will eventually encompass all things. First Corinthians 15 makes the case that Jesus’ resurrection was the “firstfruits” of this harvest, meaning it was the start and the pattern for what is to come. Easter was the start of God making all things new.

In a very real sense, we are the people of the new creation, and we are called to participate with God in his re-creation work. When the church manifests love rather than hate, unity rather than division, forgiveness rather than revenge, and healing rather than harm we are cultivating the new creation in the midst of the old. And when we are called by Christ to various works in the world (Ephesians 2:10), we manifest the reality of his new creation in government, business, the arts, health care, education, the household, and the social sector. We are revealing the resurrection truth that Christ is already reigned as Lord and foreshadowing the day when he will be “all in all.”

News
In Oregon, churches and anti-fascists unite to provide mutual aid to fire evacuees and others in need
News
Mark Galli, former Christianity Today editor and Trump critic, to be confirmed a Catholic
News
Citing Scripture, Pence switches out Jesus for the American flag in convention speech
News
Evangelical ‘Never Trumpers’ appear at alternative RNC
General story
Trump was right. God can be hurt. But not by Biden election, say theologians
© Copyright 2020, Religion News Service. All rights reserved. Use of and/or registration on any portion of this site constitutes acceptance of our User Agreement and Privacy Policy, Privacy Statement and Cookie Notice. The material on this site may not be reproduced, distributed, transmitted, cached or otherwise used, except with the prior written permission of Religion News Service.