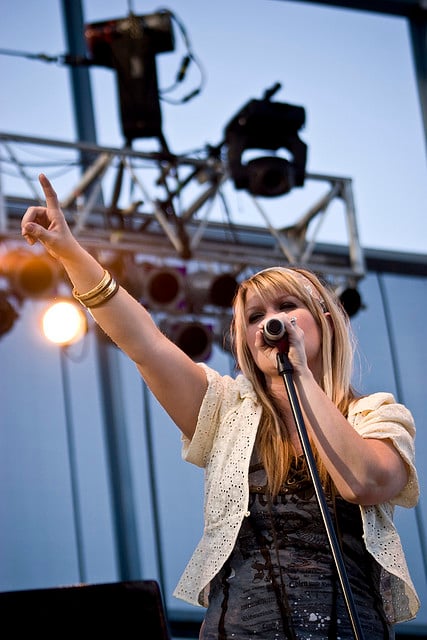 Growing up in a high school youth group, most of my friends were pretty normal people. But occasionally, I would run into someone who would, very politely, ask me not to swear in front of them. “When you say the ‘s-word,'” they would tell me, “I feel uncomfortable.” I complied, out of respect and confusion, but I also knew they would never be someone I could be close friends with. If their Christian faith was so insistent on moral rectitude, I knew I could never be myself around them.

“We left the Grammy’s early. I’ve many thoughts about the show tonight, most of which are probably better left inside my head. But I’ll say this:
I’ve never been more honored to sing about Jesus and for Jesus. And I’ve never been more sure of the path I’ve chosen.”

She didn’t say which performance caused her to walk out early (and there is something about that I respect). But reading about her decision to leave early and then publicize that decision sounded to me just like the self-righteousness of those people who couldn’t hear a swear word without their faith being threatened.

My other, larger question is this: What did Grant expect? These were the Grammys, after all — where Chris Brown (infamous for beating then-girlfriend Rihanna) was given the stage in 2012, where Paula Cole gave the audience the finger during a performance of “Where Have All the Cowboys Gone,” where Katy Perry performed “E.T.” with backup dancers in S&M gear and Nicki Minaj underwent an exorcism during her song “Roman Holiday.” The Dove Awards this ain’t.

Grant’s choice to leave is her own. But it makes me cringe just a little to hear her talk about it, because it paints another picture of Christians who, rather than being part of the world and culture we inhabit, set themselves above it. Moral superiority is not the aim of the Christian, but that’s what people see when Christian artists can’t sit through an evening of performances. I wish Grant had stayed, thinking critically about what she was seeing before she responded by walking out the door. I wish she had talked about why she was there in the first place, when she must have known the Grammys are part of the strange culture of the (secular) entertainment industry.

I wish she would have stayed home, even, like gospel singer Mandisa (whose “Overcomer” won Christian Contemporary Music Song and Album of the Year), who wrote that she was “rockin’ some purple sweats” at home when the awards were announced. Mandisa had several reasons for not attending — wanting to be at home when she is so often on the road, being certain she wouldn’t win, and, yes, the objectionable performances — but none of them were reactive. She thought about what she would be going to, decided it wasn’t for her, and watched from home, where she could walk away whenever she wanted to without causing a stir.

If we create a culture of Christianity in which other people can’t be themselves around us — whatever that means — our faith will be exclusionary and reactive. I don’t think that’s what Grant wants, but those are the consequences of walking away. I wish she would have stayed.