(RNS) North Carolina’s weekly protests against Republican-backed legislative initiatives last year brought thousands of people to the state Capitol in Raleigh each Monday chanting, “Forward together, not one step back.” Now the movement is ready to reprise its demonstrations, which recall the tactics of the civil rights era.

The Rev. William J. Barber II and his Moral Mondays team are making final preparations for the kickoff event, dubbed the Moral March, scheduled for Saturday (Feb. 8). Barber hopes it will be bigger than the Selma march for voting rights in 1965 that drew 25,000 people.

Barber, who is president of the North Carolina NAACP and a Disciples of Christ pastor, launched the 2013 demonstrations to protest legislators’ efforts to scale back unemployment benefits and decline Medicaid expansion through the new federal health law. Protesters also criticized voter ID laws, cuts to public schools and tax-reform proposals they said would reduce benefits for the poor.

Clergy were especially prominent in the demonstrations, and many, including Barber, were handcuffed at the North Carolina General Assembly and arrested on charges of second-degree trespass and failure to disperse.

In all, 945 people were arrested in 2013, as demonstrators refused to leave the General Assembly building.

The movement, which brought national media attention, has since spread to Virginia, South Carolina, Georgia, Florida and Alabama. 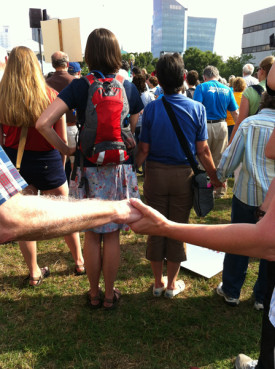 Participants hold hands at the Moral Monday demonstration on the grassy lawn of the North Carolina General Assembly on June 17. During Moral Monday demonstrations, participants listen to a fiery speech denouncing the Republican majority’s legislative actions, sing freedom songs, chant civil rights slogans and then they march two by two into the legislative building to be handcuffed by police and arrested for failing orders to disperse. RNS photo by Yonat Shimron

In South Carolina, Truthful Tuesdays adopted a rallying cry: “Enough is enough.” Georgia held its first Moral Mondays protest at the end of January to protest cuts to Medicaid. According to reports in The Atlanta Journal-Constitution, 10 people were arrested for refusing to leave the governor’s office, including state Sen. Vincent Fort (D-Atlanta). The group calls itself “The Medicaid 10.”

Though the movement has not been able to reverse any legislation, Barber said Moral Mondays were successful, especially viewed through the sacrifices of clergy arrested during the protests.

“Clergypersons are choosing to move in a prophetic tradition to challenge injustice and wrongs in government and systemic transgressions against our values,” Barber said. “It’s our Jewish friends, Christian, Universalist, Muslim friends and others who are willing to put their voices and bodies on the line. That is significant when pulpits get on fire for justice.”

(Amanda Greene is based in Wilmington, N.C., where she edits Wilmington Faith & Values.)