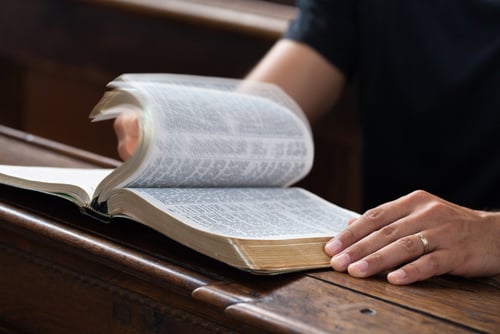 A man reading the Bible in church.
February 7, 2014
Trevor Grundy

CANTERBURY, England (RNS) Three out of 10 British children have next to no understanding of the Bible and their parents aren’t that knowledgeable, either. 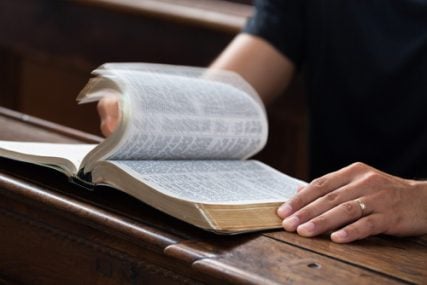 A man reading the Bible in church.

A survey released Friday (Feb. 7) by the Bible Society, founded in 1804 to spread knowledge about the Scriptures, said most boys and girls aged 8 to 15 years old did not know that Adam and Eve, Noah’s Ark or Jesus’ birth were rooted in the Bible.

More than a third of the 800 children surveyed did not know that David and Goliath and the story of the Good Samaritan were Bible tales.

One in 10 mistakenly thought the story about King Midas and Icarus was in the Bible.

But not just children are Bible ignorant.

Nearly half of the 1,100 parents surveyed failed to identify Noah’s Ark as a story from the Bible. More than one-third thought a Harry Potter plotline was or might have come from the Bible.

The Bible Society published the research to mark the launch of its "Pass It On" campaign, which aims to encourage parents to keep the Bible alive by passing its stories on to their children.

In a foreword to the report, Richard Chartres, the Anglican bishop of London, said sharing Bible stories “is as vital now as it has ever been.” He added: “There is work to be done.”

Related Posts
By Alejandra Molina
Four young people of different faiths move into a home together, then a pandemic happens
By Jeffrey Salkin
Warning: Your piety might be dangerous to your health
By Tara Isabella Burton
Canceling authors: The debate over who owns our stories
By Alejandra Molina
'Border Church' and 'Border Mosque' team up for prayer service
By Alejandra Molina
Christians urge California governor to veto bill for abortion pill access at colleges