Last week, the Public Religion Research Institute released this helpful infographic as part of its larger study on religious values, diversity, and immigration: 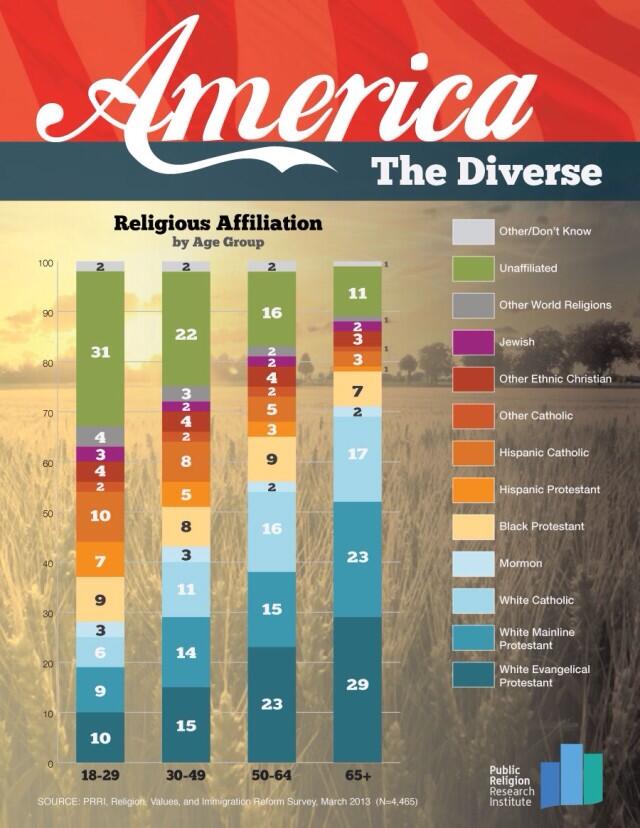 Over at Patheos, Emergent blogger Tony Jones wrote that “Here, in living color, we see the church’s failure to engage an entire generation.” And the declines do look ominous for white Catholics, mainline Protestants, and even evangelical Protestants (who, as Tony rightly notes, have sometimes claimed to be doing better with Millennials than other Protestants).

But other Christian groups are holding on or even increasing their market share. Black Protestants are holding steady; nonwhite Catholics are exploding; and Mormons (of all ethnicities combined) have moved from a 2% share in the 65+ age group to a 3% share among that generation’s grandkids.

Mormonism’s generational growth of roughly 50% doesn’t hold a candle to the explosion of “nones,” or the unaffiliated, who claim just 11% of the 65+ generation but 31% of the 18-29s. As well, it doesn’t account for the trend within Mormonism that if disaffiliation occurs, it often happens a little later in life.

But Mormons can take heart that at a time when other U.S. Christian groups are struggling to reach Millennials, the LDS Church is making that connection, at least on paper. I expect this to be further cemented by the fresh influx of tens of thousands of young Mormon missionaries, both men and women, since changes to the missionary program in 2012 lowered the age for service.

In October 2013, there were more than 80,000 Mormon missionaries serving throughout the world, an increase of 22,000 over the previous October when the age change was first announced. Many of these “greenies” are fresh out of high school and half of them are women, contributing to a better overall gender balance among the missionary force than Mormons have ever seen before. In October 2013 the mission force was 25% female, versus 15% before October 2012. The percentage of women serving is likely to continue to rise.