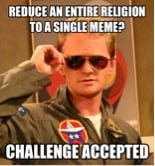 Internet memes are a popular way of communicating online, yet while they may seem playful, their messages are often quite serious. Memes are digital images that combine pictures with and succinct texts, to communicate playful yet pointed messages about politics, pop culture and religion.

A recent study of religious Internet memes, conducted at Texas A&M University, found that while many people have readily used this genre to spread religious beliefs and ideas, there may be consequences to doing so.

“This study shows how memes enable people to spread religious ideas, and at same time, critique religion.” said Ruth Tsuria, a PhD student at Texas A&M University and one of the authors of the report, “Reading Religion in Internet Memes” published 31 December 2013.

For example “Advice God” memes use the Judeo-Christian God as depicted in Michelangelo’s The Creation of Adam—God is often depicted as a harsh, unethical or suspicious (i.e. “Thou shall not commit adultery / sorry Joseph”).

Memes focused on specific religious traditions or communities use humor to share their beliefs or rituals with others in respectful ways.

The Muslim Meme Facebook page, for example, presents an image of Aladdin from the Disney movie by the same name telling Princess Jasmine “I can show you the world/but first we have to do nikah” (nikah is “marriage” in Arabic)

Researchers observed this meme affirms Muslim values, yet also shows that such memes require certain levels of religious and cultural literacy to be fully understood and their humor and meaning may be lost for mainstream audiences.

Overall, the study shows that Internet memes often “essentialize religion,”—that is, they simplify complex ideas about religion into basic ideas that reinforce, and sometimes challenge, important notions of faith.

This can be a problem because a meme designed to promote positively a community’s religious identity can easily morph into a public critique.