ROME (RNS) In an unusually informal video made on a smartphone held by a Pentecostal pastor, Pope Francis called on all Christians to set aside their differences, explaining his “longing” for Christian unity. 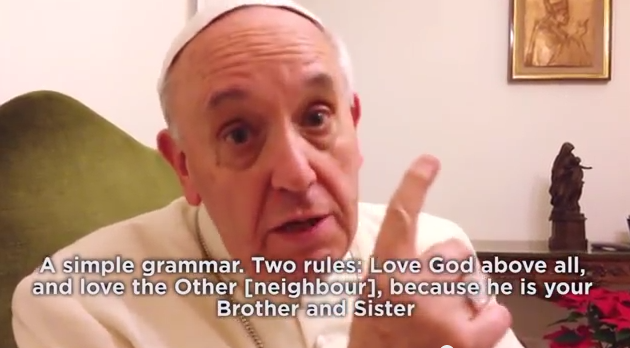 The seven-minute video, which was posted on YouTube, was made during a Jan. 14 meeting with Anthony Palmer, a bishop and international ecumenical officer with the independent Communion of Evangelical Episcopal Churches. Italian news reports say that the pope and Palmer knew each other when Francis served as the archbishop of Buenos Aires.

In his remarks, part of a 45-minute video, Francis said, in Italian, that all Christians are to blame for their divisions and that he prays to the Lord “that he will unite us all.”

“We should move forward. We are brothers. We should give each other a spiritual embrace and open ourselves to letting the Lord complete the work he started,” Francis said.

“I never saw the Lord start a miracle without finishing it,” the pontiff added, quoting 19th-century Italian writer Alessandro Manzoni. “And he will finish this miracle of Christian unity.”

He concluded by saying it doesn’t matter who’s to blame for divisions among Christians: “Who is at fault? All of us are. We are all sinners. There is only one who is right, and that is our Lord.”

Francis’ remarks are preceded by a discourse from Palmer, who also spoke, in English, about the need for Christian unity. “Brothers and sisters, Luther’s protest is over,” Palmer said, referring to the 16th-century German reformer Martin Luther.

The video is unusual in part because it was made and released in such an informal manner. Most information released about the pontiff comes from the Vatican press office or some other official church agency. The Vatican went so far as to warn pope watchers in January that information about the pope found on other sources was probably untrue — though in this case the veracity of the video is guaranteed by seeing the pope himself on camera.