(RNS) A Georgia judge on Wednesday (Feb. 19) ordered the Rev. Martin Luther King's daughter to turn over her father's Bible and Nobel Peace Prize medal for safekeeping until a final decision about their ownership can be made.

Fulton County Superior Court Judge Robert McBurney said the medal and King's traveling Bible -- used by President Obama at his 2013 inaugural -- would be placed in a safe deposit box and he would keep the keys as a King family squabble inched closer to resolution.

The Rev. Bernice King had said in early February that she would fight her brothers to keep their father’s “most prized possessions” and said she was “absolutely opposed” to selling them. She and her lawyer could not be reached for comment.

“I would have been more pleased if the court had granted complete relief, which was our request that the Bible and the Nobel Peace Prize be turned over to its rightful owner, which is the estate,” Hill said. “The judge’s interim order placing these items in a truly safe and secure location is acceptable.”

Hill is hopeful that the judge's decision will help expedite a final ruling that the two items belong to the King estate, giving it the option to sell them.

Bernice King's lawyer, Eric Barnum, told WXIA, NBC’s Atlanta affiliate, that his client would turn over the items as the judge requested. “She’s going to comply with the order of the court,” he said. “I have no doubt about that.”

The only surviving daughter of the slain civil rights leader has adamantly opposed the sale of the two items. She said earlier it was “outright morally reprehensible” and “spiritually violent” to sell the medal her father won 50 years ago.

“Our Father MUST be turning in his grave,” she said at the time. “As a minister of the Gospel, the thought of selling my daddy’s Bible troubles my mind, vexes my spirit and weighs on my soul.”

Hill said the estate decided by a 2-1 vote -- with Martin Luther King III and Dexter King in favor and Bernice King against -- to consider the sale. (The siblings' other sister, Yolanda, died in 2007.) 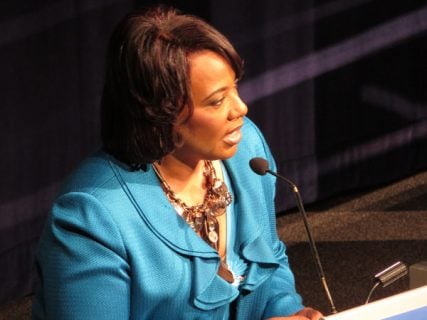 The Rev. Bernice King, CEO of the King Center in Atlanta and daughter of the late Rev. Martin Luther King Jr., speaking at the Newseum on Aug. 22, 2013. RNS photo by Adelle M. Banks

Hill also represents the estate in a suit filed last year over how the King Center, an Atlanta museum focused on nonviolence that is headed by Bernice King, is handling memorabilia of the late civil rights leader.

“The estate has always asserted that it owns" the Bible and Nobel medal, Hill said. “The court wants to resolve this issue once and for all. … Once the court rules that these items are the property of the estate, that’s the end of the controversy.”

But he added that he does not know if there will be a potential buyer when the court case is resolved.

“At this point, there is,” he said. “There may not be tomorrow.”

Related Posts
By Emily McFarlan Miller
State of the Bible: Left unread during the coronavirus pandemic
By Robert K. Vischer
Will the death of George Floyd sway white evangelicals on race?
By Nick Hall
After St. John’s, thinking differently about a president, a Bible and race
By Alejandra Molina
Four young people of different faiths move into a home together, then a pandemic happens
By Stephen B. Chapman
This year Easter will feel more like Passover