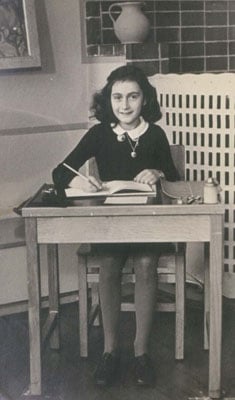 Anne Frank, photographed at school before her family went into hiding from the Nazis in 1942. Photo courtesy of the Netherlands Institute for War Documentation
February 24, 2014
Sarah Pulliam Bailey 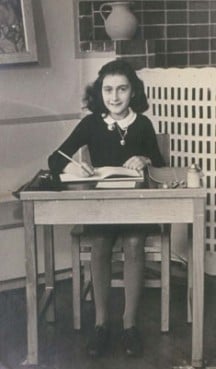 Anne Frank, photographed at school before her family went into hiding from the Nazis in 1942. Photo courtesy of the Netherlands Institute for War Documentation

Maria von Trapp, the last surviving sibling in the family that inspired "The Sound of Music," has died at 99. And the oldest known survivor of the Nazi Holocaust, Alice Herz-Sommer, has died at 110.

Meanwhile, hundreds of copies of “Anne Frank: The Diary of a Young Girl” and other books related to her have been vandalized at public libraries across Tokyo.

The star of the reality TV show "Amish Mafia" has been given three months in jail for repeatedly driving with a suspended license.

Pope Francis has begun a sweeping reform of the Vatican’s scandal-plagued financial system. Earlier this weekend, he warned cardinals that they are “not a royal court” and told them to avoid gossip and favoritism. As he added 19 new members to the College of Cardinals, the pope also told them to work together and avoid “rivalry, jealousy, factions.”

The Catholic Church is reexamining the financial costs to the church in preparing for sainthood, which can run from $50,000 to $250,000.

A federal appeals court has ruled against Notre Dame University in its challenge to President Obama's health care contraception mandate.

A federal judge says same-sex couples can marry early in Illinois largest county without having to wait for the law to take effect.

Gov. Jan Brewer is preparing to decide whether or not to sign a new law giving individuals and businesses the right to refuse service based on their religious beliefs, reflecting a national debate pitting religious rights against gay rights.

President Yoweri Museveni of Uganda signed into law a bill creating harsh sentences for homosexual acts, including life imprisonment in some cases.

The Deseret News, a newspaper owned by the Mormon Church, and The Atlantic, a literary and cultural commentary magazine, have decided to collaborate on a series on fatherhood.

New actions by the Presbyterian Church (USA) drew praise from advocates for Palestinians but threaten already-tense relations between Presbyterians and Jews.

The Washington Post looks at how Mike McCurry went from being a Clinton White House spin doctor to seminary professor.

In a speech delivered on Sunday, Minister Louis Farrakhan blasted the judicial systems in the U.S. as being biased against African Americans.

Tim Tebow could return to football to play in a new pro league in Denver. And Jason Collins signs with the Nets, making him the first openly gay NBA player.

Finally, a column to chew on: Whole Foods: America’s Temple of Pseudoscience. "Americans get riled up about creationists and climate change deniers, but lap up the quasi-religious snake oil at Whole Foods. It’s all pseudoscience—so why are some kinds of pseudoscience more equal than others?"