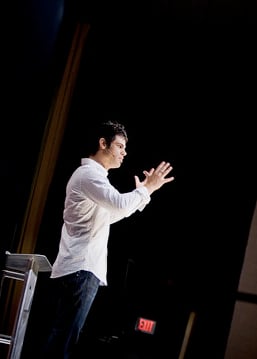 (RNS) A Southern Baptist megachurch pastor in North Carolina, already under fire for buying a $1.6 million house, is in the spotlight again for “spontaneous baptisms” that turn out to be not nearly so spontaneous.

Steven Furtick, 34, routinely draws about 14,000 worshippers to several campuses of Elevation Church in and around Charlotte. The church, launched in 2006, have been listed by Outreach magazine as one of the top 100 fastest-growing churches in the country.

Part of that growth has been attributed to Elevation’s flashy baptism ceremonies, particularly as the Southern Baptist Convention grows increasingly concerned about declining baptism rates as a key measure of evangelism and church vitality.

But a new report from NBC Charlotte suggests that Elevation’s supposedly spontaneous baptisms are carefully planned ahead of time, with people planted in the congregation to start the walk down the aisle.

“Fifteen people will sit in the worship experience and be the first ones to move when Pastor gives the call. Move intentionally through the highest visibility areas and the longest walk,” a guide posted on a webpage for Furtick’s book says.

The elaborate staging, the guide explains, is “how we activated our faith to pull off our part in God’s miracle.” The “spontaneous baptisms” are to be done quickly, “on average between 30 to 45 seconds,” to keep things flowing, the guide suggests.

“Think of the (changing) room in terms of a NASCAR pit stop,” the “how-to” guide explains. “It has to be quick in and quick out.”

The church provides everything a new convert could need to get ready for baptism, from dark-colored T-shirts and shorts in various sizes to sports bras, hair ties, deodorant, flip-flops and make-up remover. Cheering volunteers man the doors to usher the “traffic” of new believers toward the front, and another set preps the converts for a dip in the baptismal pool.

“The first people going into the changing rooms have got to be people who move quickly, they must be changed and out on stage in a few minutes,” it says. “Pick young energetic people, not necessarily those who are there first.”

Baptisms in the SBC — the nation’s largest Protestant denomination — have declined during six of the last eight years, with 2012 experiencing the lowest rates since 1948.

A spokesman for the Southern Baptists’ North American Mission Board, the agency that assists with planting churches like Elevation and that tracks baptism rates, declined to comment on Elevation’s method of mass baptism, citing each church’s autonomy.

Elevation received training, consultation and financial support in its first two years, according to Brian Davis, associate executive director-treasurer of the Baptist State Convention of North Carolina. However, the church grew so quickly that the leadership no longer needed start-up help, he said.

Calls and emails sent to staff at Elevation Church were not returned.

Furtick’s salary is set by a board of overseers made up of other megachurch pastors, some of whom have been invited to speak at Elevation, according to Warren Cole Smith, who lives in Charlotte and has written about Furtick for World magazine.

“People were willing to excuse his flamboyance and extravagant lifestyle by saying but ‘He’s doing such great work.’” Smith said. “Now, this new controversy calls into serious question the legitimacy of conversion rates the church have been claiming.”

Furtick has associated himself with other megachurch pastors like Joel Osteen, James MacDonald, Ed Young Jr., Perry Noble and T.D. Jakes, some of whom are criticized for promoting a prosperity gospel.

“This is one of the byproducts of an evangelical movement that favors emotionalism and personal experience over doctrine, theology and biblical teaching,” Smith said.

Mass baptisms are not unheard of in Christian churches, but some pastors are wary of the practice since some people might not understand what it means, said Tony Merida, pastor of Imago Dei Church in Raleigh, N.C.

“I wasn’t as surprised by (the baptisms) because we have a history in a lot of revivalism and evangelicalism in that type of planning to get numbers,” said Merida, who is also a preaching professor of Southeastern Baptist Theological Seminary. “I can’t imagine (the Apostle) Peter saying, ‘Hey, 15 of you get up and we’ll see if 1,000 will join.’”

Merida points to the New Testament book of 2 Corinthians to explain why he’d be uncomfortable with a baptism that might appear to be manufactured, where the Apostle Paul writes: “Rather, we have renounced secret and shameful ways; we do not use deception.”

What bothers Merida more, however, are images from coloring books that children are apparently using in Elevation classrooms that include a picture of Furtick.

“We are united under the visionary,” one page says. “Elevation Church is built on the vision God gave Pastor Steven. We will protect our unity in supporting his vision.”

“You could start a cult this way,” Merida said. “You could do so many crazy things with this ideology.”

Opinion
Beyond $1,000 sneakers: Carl Lentz, hype priests and the cult of celebrity
Follow us on Facebook!
Submit your photos to RNS