KIEV, Ukraine (RNS) Acting President Oleksandr Turchynov is neither Ukrainian Orthodox nor Eastern Rite Catholic, and that may be the key to his success at a time when fissures between East and West are threatening to split the country, analysts say. 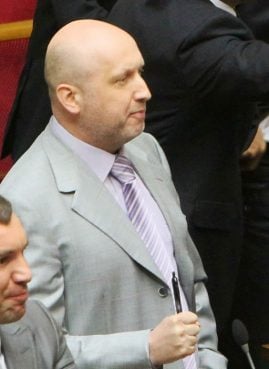 “It plays against the stereotype that the pro-democracy, pro-Western protesters are mostly Ukrainian-speaking Catholics,” said Vitaly Chernetsky, a professor of Slavic languages at the University of Kansas and president of the Massachusetts-based American Association for Ukrainian Studies.

Turchynov, a Baptist pastor, became Ukraine’s interim head of state on Sunday (Feb. 23), a day after President Viktor Yanukovych was forced out amid a barrage of criticism from protesters who occupied the capital’s central square, known as the Maidan in Ukrainian, for the past three months.

As the right-hand man of former Prime Minister Yulia Tymoshenko, Turchynov doesn’t necessarily enjoy the trust of Maidan occupiers who are deeply skeptical of political insiders.

But he is widely viewed as a consensus candidate who can steer Ukraine to elections scheduled in May as part of an agreement Yanukovych negotiated with protesters before his exit.

“I am a little annoyed by (the selection of) Turchynov but I understand he is only a temporary choice,” said protester Igor Blyzniuk. “Let’s see what happens next and who will be in the new government.”

Blyzniuk and other demonstrators took to the Maidan starting in November to protest Yanukovych’s decision to reject a pact with the European Union in favor of closer ties with Russia. The ensuing emergency has deeply divided Ukraine between its European-leaning western provinces and its Russian minority communities to the east.

Last week, clashes between police and protesters resulted in dozens of deaths, further raising the stakes for the fight over Ukraine’s future as European, American and Russian diplomats struggled to manage the crisis.

Turchynov, 49, began his political career as counselor to former Ukrainian Prime Minister Leonid Kuchma in 1993. Six years later, splitting with Kuchma, he co-founded Batkivshchyna, or the Fatherland Party, with Tymoshenko, and in 2001 organized rallies against Kuchma. An internationally famous leader known for her traditional blond braids and peasant-style dresses, Tymoshenko played a major role in defeating Yanukovych in the presidential election during Ukraine’s so-called Orange Revolution of 2004 and 2005.

Under Tymoshenko, Turchynov was deputy prime minister. He also oversaw Tymoshenko’s political operations after she was imprisoned in 2011 on charges of abuse of office.

“Turchynov is one of the best organizers in Ukraine,” said Volodymyr Fesenko, director of the Center of Applied Political Studies, or PENTA, in Kiev. “He is known to always play secondary roles, never pretending to take the primary ones.”

He’s also considered bookish and self-effacing. His 2005 political novel, “Illusion of Fear,” which draws heavily on biblical quotes and images, was the basis of a film nominated for an Academy Award for best foreign language film in 2008. It did not win.

But Turchynov’s style has led to criticism that he has trouble connecting with regular people. He drew the ire of protesters during the weekend when he suggested they go home now that Yanukovych had relinquished power. Despite Tymoshenko’s support, he failed in his bid for mayor of Kiev in 2008.

Those past fumbles could spell trouble for the interim president, said Fesenko. Turchynov’s faith — he leads a church called Slovo Zhizni, or “Word of Life” — may be an asset that separates him from the East-West division in the country. But it could become a handicap if the tide of opinion turns against him, too. There are an estimated 135,000 Baptists in the Ukraine out of 45 million people.

“Unlike Yulia Tymoshenko, Turchynov is not charming at all,” Fesenko said. “And he is a Baptist preacher. It works against him too. Baptism is not mainstream.”

Some analysts say many Ukrainians are suspicious of Protestants, likening them to warring religious sects.

Others don’t think Turchynov’s religion will play much of a role. Around 2 percent of Ukrainians identify as Protestant. Many are recent converts as the country has become more open to missionaries. When Ukraine was part of the Soviet Union, U.S. missionaries were forbidden from actively seeking converts.

Turchynov’s sermons as a member of the Evangelical Baptist Union of Ukraine appear to have helped him in his first address to the nation.

On Monday, the Evangelical Baptist Union of Ukraine expressed support of Turchynov and Ukraine’s other new leaders.

“Unite in prayer for the future leadership of our country,” the statement said. “Please pray for the members of the current transitional government performing parliamentary and presidential duties so that they are not driven by more than wisdom and fear of God.”