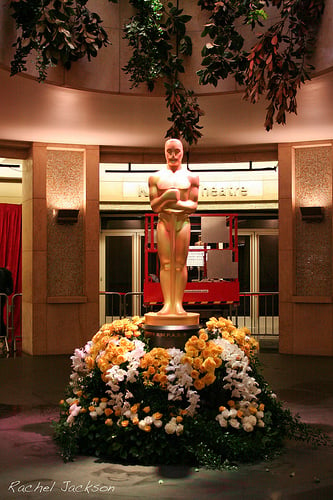 A statue of Oscar himself.
February 28, 2014
Laura Turner

A statue of Oscar himself.

We are two days away from the greatest day of the year, so today is like December 23rd for kids, or April 18th for pot enthusiasts, or June 12th for people who really love the American flag. The Oscars really are one of my favorite days of the year, and as much as it can be a joke to say, I love that they do something very few events can: They bring all kinds of people together. An equivalent, I suppose, would be the Superbowl, but my level of football passion pales in comparison to my love of fashion, snark, and film.

The Oscars have a strange and storied history. Started in 1929 -- when tickets were $5 and held over dinner at the Roosevelt in Hollywood -- they have chronicled the taste, art, and comforts of a country through the Great Depression, World War II, Korea, and Vietnam, Stonewall and Selma, Justin Bieber and Miley Cyrus. In a country with a short collective memory, the Academy Awards are an indulgent ritual, where the past catches up to the present and the family that once gathered around the radio now plops on the couch with a bowl of popcorn.

And some strange things happened along the way: In 1934, there was a write-in campaign to nominate Bette Davis in Of Human Bondage. (If you've read any of Davis's autobiography, you can't help but be sure she started the campaign herself.) In 1968, the Awards were delayed two days on the heels of Martin Luther King, Jr.'s assassination -- one of only three delays in the Awards' 86-year history. In 1942, How Green Was My Valley beat out Citizen Kane for Best Picture. Kane, now widely considered the best film of all time (it alternately fascinates me and puts me to sleep, to be honest), Orson Welles's roman á clef of William Randolph Hearst, was either ignored or lambasted by Hearst's periodicals, which were legion.

The category of Costume Design was introduced in 1948 and is responsible for Edith Head's 8 statues, still a record for any woman. In 1973, Tatum O'Neal became the youngest Oscar-winner at age 10 for Paper Moon; twenty years later, Anna Paquin won for The Piano at 11. Only three films have ever won the Big 5 -- the EGOT within the Oscars -- of Best Picture, Director, Actor, Actress, and Screenplay. Any guesses?

Okay, I give up: It Happened One Night (a charming, pre-Code romantic comedy with Clark Gable and Claudette Colbert) was the first, in 1934; then One Flew Under the Cuckoo's Nest in 1975, and Silence of the Lambs sixteen years later. Meryl Streep and Jack Nicholson hold the record for most acting nominations, at 18 and 12 respectively. And it wasn't until 2001 that a black actress -- Halle Berry, who gave a beautiful speech -- won the Best Actress category.

1940, though, saw the most interesting and poignant acceptance speech in Oscar history. Hattie McDaniel, announced as the Best Supporting Actress for her turn as Mammy in Gone with the Wind, spoke with grace and aplomb when she thanked the Academy. But the underlying issue of race was very clear, even in the introduction. "I sincerely hope I shall always be a credit to my race and to the motion picture industry," McDaniel said, in a moment that will break your heart and give you hope at the same time. Watch it at least three times today, or any day you need a good cry:

I'll be live-tweeting the whole red carpet and ceremony, so join in the fun on Twitter, or stay very far away if that's not your bag, baby. To sate you in the intervening days, here are a few of my favorite Oscar reads of late.

This piece at Slate takes a look at just who gets thanked in acceptance speeches. Mostly it's Meryl Streep.

Kate Arthur over at Buzzfeed ranked all 85 Best Picture winners in order of greatness. I disagreed right away (Gigi does NOT deserve to be the worst), but that's the magic of it.

At Patheos, Rebecca Cusey compiled a list of which of this year's nominees were most popular with different religions.

Also at Slate, the tuxedo gets its day.

Elle has this slideshow of what it says is "EVERY GOWN WORN BY EVERY BEST ACTRESS OSCAR WINNER," and it's super fun but it also skips a lot of years. I am currently drafting a very strongly-worded letter.

The UK version of Cosmo features this handy little infographic that does, in fact, include every gown worn by every Best Actress winner. (Why can't America get this right?) Although they did leave out Cher's head thing in the 1988 slot.

Finally, this long read from New York Magazine is a look at the business side of the industry: How studios, actors, and others campaign for a win on Oscar night.