The mystery of comets is explored in the all-new “When Knowledge Conquered Fear” episode of “Cosmos: A Spacetime Odyssey,” airing March 23 on Fox and March 24 on the National Geographic Channel. Photo courtesy of Fox Broadcasting

(RNS) Many viewers may be hoping that “Cosmos: A Spacetime Odyssey” lives up to the original series created by astronomer Carl Sagan 35 years ago.

But no one will watch the program, airing Sunday (March 9) on Fox, with greater anticipation than nonbelievers — atheists, agnostics, humanists and other “nones.”

Among this group, many credit Sagan and the original “Cosmos” with instilling in them skepticism of the supernatural and a sense of wonder about the universe. Both, they say, encouraged their rejection of institutional religion.

Humanists are especially eager. They claim Sagan as their own, and see in the “Cosmos” series — a multipart journey to the outer reaches of our universe — and in his dozen books a vibrant strain of their own philosophy. That philosophy favors reason over religion and holds human beings as both good and responsible for the Earth’s plight. 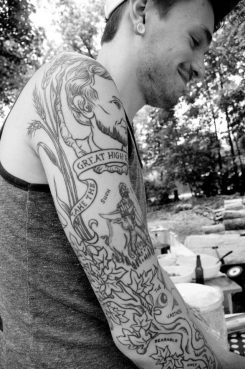 “In my eyes, Carl Sagan represents the ‘yes’ and possibility of Humanism rather than just the ‘no’ and the disagreement,” said Chris Stedman, assistant Humanist chaplain at Harvard University and a blogger for Religion News Service. “For that reason I think he occupies a special place among humanists and atheists.”

In fact, Sagan — who died of a blood disorder in 1996 at age 62 — is so important to Stedman, 26, he has the scientist’s words inked on his right arm. “For small creatures such as we, the vastness is bearable only through love,” it says.

Some groups have named awards for Sagan, while others celebrate “Carl Sagan Day” on his Nov. 9 birthday. Sunday Assembly, a growing movement of nonbelievers, has begun weekly meetings with his quotes. Some nonbelieving parents have named their children after him.

“His idea of the immensity of the universe and how small we are just impressed me so much as a teenager,” said Amanda Knief, managing director for American Atheists and owner of a 3-year-old Yorkie named Sagan. “It really led me to look beyond the religion I was raised in and shaped my Humanism.”

[READ: Carl Sagan’s most memorable statements about the universe from a nonbeliever’s perspective.]

Yet Sagan never publicly proclaimed himself a humanist or even an atheist — though he enthusiastically accepted the American Humanist Association’s Humanist of the Year Award in 1981, the year after the original “Cosmos” broadcast. Instead, he called himself an agnostic because, he said, he could not disprove the existence of God.

Astronomer Carl Sagan called himself an agnostic because, he said, he could not disprove the existence of God.

How did this man — a scientist by training, a teacher by profession and a poet at heart — bring so many people to nontheism, a position he never publicly professed?

“Here’s where Humanism comes in, because it’s not as though he was some hard-core atheist activist,” said Paul Fidalgo, communications director for the Center for Inquiry who first encountered Sagan through his parents.

“He showed us that to marvel at life on our planet was to cherish it and work to preserve it. For that, we have to reject bad, old modes of thinking, look at the world as it really is rather than how we’d like to believe it is, and tackle the crises that face us.”

One reason Sagan was such a great science communicator — the Library of Congress named the print version of “Cosmos” among the most influential American books — is that unlike many of today’s prominent atheists, he never denigrated religion or its adherents, his fans say.

That’s something Owen Gingerich, a Christian, Sagan friend and consultant on the original “Cosmos,” learned firsthand.

“He never criticized me for being a believer or disparaged my belief system,” Gingerich said. In private, “Carl could get off on a tangent about how much trouble religious beliefs had caused, but he was certainly no Richard Dawkins.”

Carl Sagan with a model of the Viking lander

In fact, it was Sagan’s embrace of the language of religion in “Cosmos” that many nonbelievers think made it as moving and memorable as it was. In the first episode, Sagan calls the cosmos “the grandest of mysteries.” Later he intones: “The cosmos is all that ever is or ever was or ever will be.”

“Sagan took scientific facts and wove a kind of spiritual connection between us and the cosmos,” said Daniel Fincke, a philosopher and blogger who first encountered Sagan through the 1997 film version of his book “Contact.” “He has this notion that we are made of the stars, they are not separate from us, we come from them and we’ll return to them. It is a way to re-appropriate people’s feelings of religious wonder and connect them to our scientific origins.”

For Sagan, that connection was personal. “Science is not only compatible with spirituality; it is a profound source of spirituality,” he wrote. “When we recognize our place in an immensity of light-years and in the passage of ages, when we grasp the intricacy, beauty, and subtlety of life, then that soaring feeling, that sense of elation and humility combined, is surely spiritual.”

Not all nonbelievers are comfortable with that assessment, but James Croft, training to become a nontheistic Ethical Culture minister, agreed. He has given talks on Sagan’s science as a source of spirituality at Carl Sagan Day celebrations.

“Sagan juxtaposes the best of the religious and scientific world views,” Croft said. “It is his generosity of spirit and his willingness to understand what is appealing in religion while rejecting its claims that has most affected me.”

Was Sagan aware “Cosmos” was so charged with his own nonbelief that many humanists and atheists today see it as almost a manifesto of that philosophy as much as it is of science?

James Randi, another Sagan friend and associate and a prominent skeptic in his own right, says the answer is probably not.  Nonbelief was just an essential part of who he was.

“Carl was quite committed to that attitude (nonbelief),” Randi said. “There was no other way that he could look at the world.”

News
The ‘chai’ charm that keeps this secretary of health grounded in the value of life
Opinion
Warning: Your piety might be dangerous to your health
News
2/3 of Amazon bishops support married priests, says Brazil bishop
News
The science of Sabbath: How people are rediscovering rest—and claiming its benefits
Signs of the Times
To save the planet, we need faith, ethics, science and economics