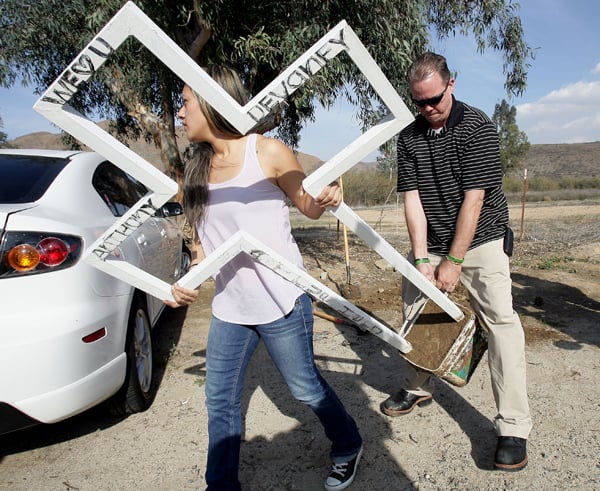 Mercedez Devaney, 24, and her father Chad Devaney remove one of the roadside memorial crosses for 19-year-old Anthony Devaney after pressure to take down the crosses from the American Humanist Association on Lake Street and Temescal Canyon Road in Lake Elsinore, on March 6. Photo courtesy of © Frank Bellino/Press Enterprise/ZUMAPRESS.com
March 11, 2014
Kimberly Winston

(RNS) A California resort town, already reeling from a legal fight over the placement of memorial crosses at a minor league baseball stadium, is now engaged in another round of bitter acrimony over the display of crosses on public land.

Mercedez Devaney, 24, and her father Chad Devaney remove one of the roadside memorial crosses for 19-year-old Anthony Devaney after pressure to take down the crosses from the American Humanist Association on Lake Street and Temescal Canyon Road in Lake Elsinore, on March 6. Photo courtesy of © Frank Bellino/Press Enterprise/ZUMAPRESS.com

On Thursday (March 6), AnnMarie and Chad Devaney reluctantly removed a roadside memorial cross in Lake Elsinore, Calif., near the site where their 19-year-old son Anthony was struck and killed by a car in May 2012.

Not long after, another family appeared at the scene to erect six smaller wooden crosses at the same site. Each bore a handwritten message, including “What if this was your child?”, “To each his own,” and “Get a life.”

“They said they have to take that one down,” local resident Doug Johnson told the Riverside Press-Enterprise, after coordinating the display with his wife, Emily. “But they didn’t say anything about putting another one up.”

The original five-foot cross had been there for more than a year when a local resident contacted  the American Humanist Association, a national organization that advocates for the rights of nonbelievers, to complain. The AHA asked city officials to remove the cross because its location on public land violated the separation of church and state.

“Unquestionably, the city’s selective enforcement of its signage ordinance and its displays of the Christian cross on government property violates the state and federal Constitutions and must therefore be removed immediately,” the letter stated.

The city removed the cross in early December, but replaced it after the Devaneys complained, the letter states. The cross was allowed to stay through the Christmas holidays but the family was told to remove it by Jan. 6. Two months later, the family complied.

This is the second kerfuffle in as many months over religious imagery on public land in Lake Elsinore, a city of about 53,000 people southeast of Los Angeles. Last month, a federal judge ruled the city could not place a proposed veterans memorial bearing crosses and Stars of David on the grounds of its minor league baseball stadium.

David Niose, legal director of the AHA’s Appignani Humanist Legal Center, said in a statement Monday that Lake Elsinore has a “notorious reputation" for violating the constitutional ban on government establishment of religion.

“The AHA sent the letter only after it became clear that the city had been dishonest to the complaining parties, that the large cross could be replaced with a more appropriate memorial, and that the only way to remedy the situation was to let the city know that we were serious,” Niose said.

“A temporary memorial placed by a loved one immediately after a fatal accident could be understandable, but that’s not what this was.”