(RNS) Most days, Caleb Wilde is a funeral director, discreetly making burial arrangements and guiding survivors in a time of loss. 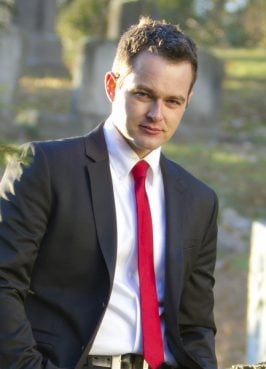 Caleb Wilde is an undertaker with a media presence seemingly tailor-made for the age of disclosure. Photo by Andrew Hostetler, courtesy of Caleb Wilde

But in his off hours Wilde has another, less conventional online side, in which he shares candid observations, irreverent thoughts on death and photos that sometimes skirt the edge of outrageous.

Wilde is an undertaker with a media presence seemingly tailor-made for the age of disclosure.

His blog, “Confessions of a Funeral Director” has more than 80,000 monthly readers, a Twitter following of more than 16,000 and a Facebook page that attracts well over half a million visitors a week.

The 32-year-old mortician, who once considered becoming a Christian minister, is an Internet icon redefining a staid profession and opening up conversations about life’s ultimate concerns.

As recently as 10 years ago, a mortician for the Internet age might have been unthinkable even for Wilde himself, who comes from a prominent local family active in the funeral industry since the 1840s.

As a young man, he volunteered with the Christian international organization Youth with a Mission, where he met his future wife, Nicki. His religious background includes a Bachelor of Arts from Lancaster Bible College and a Master of Theology degree from Biblical Seminary in Philadelphia.

But as his beliefs have changed, so has the focus of his studies. He is now enrolled in an online master’s degree program on “Death, Religion and Culture” at the University of Winchester in England.

Wilde no longer attends church, but enjoys studying theology and religion. “I’m continually asking questions,” he said.  “It’s at the forefront of my mind.”

And while he said he doesn’t find much meaning in the notion that life’s tragedies will be “redeemed” by resurrection, he is still drawn by the idea of a suffering God as personified in Jesus Christ.

“It is probably the only thing that holds me within the bounds of Christianity,” he said.

Once a forum for personal theological explorations, his blog has evolved into an online edition on all matters death.

Among the topics he tackles:

Wilde is not the only youthful funeral director casting a wry eye on the industry, but he is one of the most ubiquitous.

“Caleb is humorous and irreverent,” said Joshua Slocum, executive director of the consumer information and advocacy group Funeral Consumers Alliance. “To me, that’s refreshing. In the past couple of years I have noticed some fresh thinking coming from the younger generation (of funeral directors). It pleases me, because it’s such a stagnant industry.”

Not all of his mortician colleagues are happy about Wilde’s candor.

“My openness is often criticized by others in the profession,” he said. About once a week he gets an email suggesting he give it up.

His grandfather isn’t crazy about the blogging, either. “It angered him once so he quit reading it,” he said.

Neither Wilde nor Slocum thinks it’s their role to guide people as to what they should believe, or how to grieve. But as funeral practices change, and as electronic communication enables broader dialogue and faster response, the way some Americans talk about death is changing.

“On the Internet nothing is sacred, and everything goes,” said Gary Laderman, chair of the department of religion at Emory University, and an expert on American death rituals.

Wilde’s mission is to present death in ways that are palatable enough for people to take in the message along with the wit.

On the other hand, he added, he also has a less lofty goal.

“My life would be made if I (made it) onto Jon Stewart or Stephen Colbert,” he added wryly. “I would die happy.”