In the excellent recent New York Times article about Mormon sister missionaries, some small facts in an infographic may have escaped readers’ notice:

I was actually surprised to see that there’s even that much parity in the 31 to 45 age demographic. Anecdotally, I know far more single women who are active in the Church than single men. Most of these “mid-singles” (those who have grown too old for the Young Single Adult wards that boot out all over-30s, Logan’s Run-style) are faithful, active, interesting, beautiful women. And many of them are hurting inside.

I just finished reading the memoir of one such woman, a BYU graduate. Nicole Hardy  has a happy and stable Mormon childhood and always expects to get married. Her patriarchal blessing, in fact, explicitly states it; in addition, her loving mother has a portentous dream in which she sees Hardy as the future mother of four.

But the husband, and therefore the children, do not appear. So Hardy works hard and gamely dates LDS men (who sound frankly awful), even sailing on an LDS singles cruise.

The celibate life is difficult for her, having been blessed or cursed with a healthy sex drive. She takes up hobbies that require her to be fully present in her own body: salsa dancing, scuba diving. She quits her safe, buttoned-up teaching job for an MFA program that will allow her to follow her literary dreams, and she travels. She has flings that stop short of intercourse. 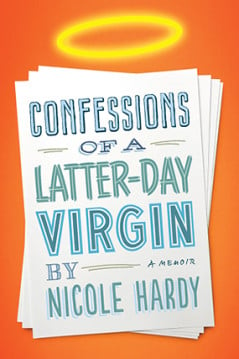 And she begins to feel out of place in a religion that so heavily emphasizes marriage as the end-all of human experience – even tying marital status to eternal worth – and that praises motherhood as the default goal of every human with a uterus.

Hardy has a strong faith in God, but fellow Mormons’ condescension toward single women rankles. She gets the feeling from leaders and members that nothing she’s done with her life so far is worthwhile in itself; it is all just biding time until her “real” life begins at marriage.

People at church are well-meaning. When Hardy lights up with pleasure at a Relief Society party, one sister swoops down with congratulations, thinking that—finally!—this must be The Long-Awaited Engagement. When Hardy reveals instead her delight at having her first poem published, the Relief Society sister is thrown off-kilter, not quite knowing how to respond. “‘How nice,’ she says, with an encouraging smile. ‘It’s good you have something to keep you occupied.’”

Over time, the sense Hardy has of being valued and respected just as she is by her writing colleagues and non-member friends begins to win out over the relentless pastel disparagement she encounters at church.

Stacking chairs with the bishop’s wife one Sunday at the end of Primary (where the bishop has intentionally called Hardy because it will be good for her to be around children, as he explains pointedly), this mother of eight clucks sympathetically that Hardy lacks children of her own. But when Hardy cheerfully admits she’s never particularly desired children or felt she’s missing out by not being a mother, the bishop’s wife recoils in judgment: “If you were truly living the Gospel, God would bless you with a desire for children.”

This is not an angry or bitter book. Hardy loves her goodly parents and her people, but eventually decides she can’t be Mormon anymore. This isn’t due to one major event so much as a long series of microaggressions at church during her twenties and thirties.

All I can say is that it is truly Mormonism’s loss that this funny, smart, talented, caring woman is no longer sitting in our pews and teaching our CTR 5s. At the end of the book, after Hardy has taken the plunge and told some of her story in a New York Times op ed, a sister from her parents’ ward appears on their doorstep. Fearing condemnation, Hardy’s mom almost doesn’t open the door; when she does, however, it is to discover that this woman really needs to talk about the struggles her own adult children are having in the Church.

‘The church needs to serve its singles better,” Hardy’s very orthodox Mormon mother concludes. “It needs to do better.”