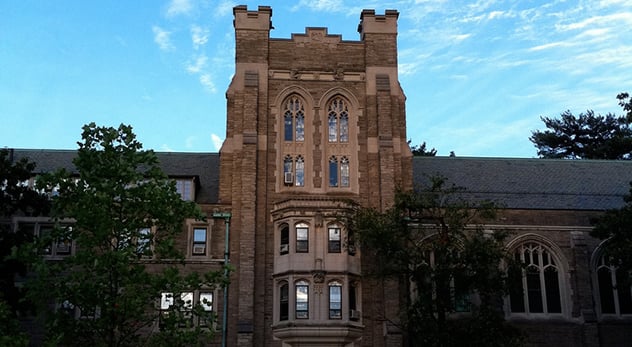 "Not long ago, Harvard Divinity School stood for something," First Things editor R.R. Reno once wrote.

The implication is that this infamous divinity school no longer stands for anything. Except perhaps theological liberalism in its most potent form. Many Harvard Divinity professors see the Bible as deeply flawed relic, perhaps worthy of academic analysis but lacking even a drop of spiritually transformative power. They will tell you that Paul was probably gay and Jesus was likely married and that the latter was no more divine than the former.

Is it possible to find a personal, living God in a place like this? Andrea Raynor did. At least in the 1980s and 90s. Andrea arrived to study religion, lived in the dean's home where she worked as a maid, and left an ordained minister. Here, we discusses her often surprising experiences at HDS and Andrea's new book, "Incognito: Lost and Found at Harvard Divinity School."

RNS: The stereotype of Harvard Divinity School (HDS) is a post-Christian, religiously antagonistic bastion of liberalism where only a Unitarian would be comfortable. Is this a complete stereotype or mostly right?

AR: My first response to this question was that Harvard Divinity School was not antagonistic in any way—religiously, socially, or politically.  I think so fondly about my experience there (which was, admittedly, a number of years ago now), that only the best memories remain. But after checking in with my best friend Katherine, who lived it with me, I was reminded that there were moments of conflict, and even what one might accurately call antagonism. Sharp minds can fling sharp words. The challenge was to take these difficult moments and to learn from them. This wasn’t always easy. Even so, I found HDS to be a place where any person of any faith could feel comfortable, if they were willing to engage in genuine dialogue.

Because of its emphasis on scholarship, one might accurately say that the community was more theologically liberal than conservative, but I wouldn’t describe it as post-Christian. Come to think of it, I wouldn’t describe it as Christian at all, which is not a criticism in any way. Harvard Divinity School is not a seminary, whose primary mission is to turn out ministers; rather, it is a nonsectarian institution intent on educating students in the study of religion and to prepare them for leadership in religious, governmental, and service organizations. There were Christians at HDS, certainly, just as there were Jews, Buddhists, and atheists. I did not go to Harvard because I wanted to be a minister—in fact, just the opposite. I went to study and to learn, and to find a pathway to service. That I emerged an ordained minister surprised even me.

RNS: You say there’s “more sexual intrigue than a stereotypical college fraternity house” What do you mean by that?

AR: Oh boy—I thought that question might come up. When you think of divinity school, you don’t usually think of wild times. While HDS was a far cry from "Animal House," it wasn’t a monastery either. It was not filled with sanitized versions of men and women but real, predominantly young, people exploring who they were and what they believed in. This prompted the usual relationship dramas, as well as some very funny moments, between mostly earnest souls who were struggling to live authentically.

At that time, I always seemed to be entangled in some sort of romantic mess, but I wasn’t alone. In addition, there was a genuine tolerance for people of all sexual orientations and gender identities. This freedom added a layer of color and complexity as people moved openly together, and it wasn’t always clear who was attracted to whom. To add a bit of intrigue, there was the occasional unconfirmed rumor of students sleeping with professors in order to garner acceptance into doctoral programs; and as a maid living in the dean of the Divinity School’s house, I had a fly-on-the-wall vantage point from which to witness some of the mischief myself.

RNS: You were at Harvard 1983-1996 and struggled with whether “a pretty girl can truly wear a collar.” What challenges do women still face today in ministry? Are things getting better or worse?

AR: At that time, more and more women were seeking ordination, but we were still a minority. The Episcopal Church had only been ordaining women for about seven years. Catholic women were struggling with whether to keep pounding against the doors of their tradition or to jump ship and become Episcopal priests. Even though United Methodists had granted women the right to ordination in 1956, women were still more likely to be appointed as “associate pastors” than “senior pastors.”

I was the first woman pastor in every church I served. I was always the associate, whose primary duties were overseeing the youth fellowship and the Sunday school, while preaching once a month. At the end of a worship service, I was more likely than my male contemporaries to hear a comment about what I was wearing or how I looked; and I seriously doubt any of them had been mistaken for a “candy striper,” while making a hospital visit, as I had on numerous occasions. They had the luxury of being seen as “that nice, young minister,” while I was often viewed as “that cute little girl.”

Thankfully, all these years later, a woman in the pulpit is no longer an anomaly. I’m gratified to know that women have followed me in at least one of the churches I have served; hopefully the ghost of my presence made their arrival a bit easier. The challenge for young women continues to be carving out a niche for which there is still but a flimsy roadmap. Young, attractive women don’t fit the cliché of the rosy-cheeked priest or the white-haired, grandfatherly minister—images which are familiar and (for the most part) trusted. Therefore, it takes more conscious effort to establish authority and trust.

RNS: When I was studying theology at Emory University, I found that being exposed to a range of views was a great resource. Did you feel like having a range of beliefs colliding in religious education was a strength or not? Did that enhance your education?

AR: It was absolutely a strength, and one of the primary reasons I wanted to go to Harvard Divinity rather than a more traditional seminary. To be in a classroom with students who were Catholic and Protestant, Jewish and Muslim, Buddhist and Hindu, agnostic and atheist, exploded my conception of the Divine and challenged me to go deeper within myself, within my faith, and within my grasp of biblical scholarship. In the end, I rediscovered the deep roots and the beauty of my faith, not despite but rather because of the rich diversity of the Harvard community.

RNS: Okay, dish. What would people be most surprised to learn about the hallowed halls of Harvard Divinity?

Perhaps it would be surprising to know that, in addition to the scholars and the cynics, the community organizers and the left-wing liberals, there are people quietly praying for the world at HDS, whether doing it in drag or in a collar, in a Yarmulke or in a hijab. Even now, right at this moment, I am confident that some of the best spirits, the best minds, the best hearts are working away on behalf of this beautiful, battered planet. And that gives me hope.