Yesterday, a spokeswoman from the Public Affairs department of the LDS Church released a statement saying that any women who plan to request seats in the male priesthood session during General Conference weekend take their argument outside—literally. As the Salt Lake Tribune reported this morning,

Mormon women seeking tickets to the faith’s general priesthood session next month will not only be denied access to that all-male meeting, but also may be shut out of Salt Lake City’s historic Temple Square altogether.

There is something deeply symbolic about yesterday’s statement, for it reveals what the Church apparently thinks of the feminists within its fold. We, as faithful and active members of the Church, are being lumped together with the same anti-Mormon protestors who routinely crash General Conference and shout that the Mormon religion is of the devil. These protestors have started fistfights with conference-goers and even stomped on or burned temple garments.

I have little in common with those people. I love my Church and consider myself a believing and active Latter-day Saint. Temple Square is Mecca, my axis mundi.

But as someone who supports the ordination of women as the fullest expression of spiritual equality, I am being told my views are anathema.

There is some irony in how this is being done. Even as the Church has been forced to respond to the vocal and visible requests of Mormon feminists like me, it wants to make feminism appear powerless and insignificant. In yesterday’s church-owned newspaper the Deseret News, a patronizing lead sentence informed us all that “a small activist women’s organization is detracting from thoughtful discussions about women in The Church of Jesus Christ of Latter-day Saints.”

The article positions Mormon feminism as a lunatic fringe, a mere distraction, a mosquito to be swatted off Temple Square.

The newspaper article is correct that only small numbers of Mormons say they favor women’s ordination (though it would be interesting to gather more recent data than the Pew survey to see if the numbers are still the same).

And that’s to say nothing of the fact that some women and men would participate in the demonstration or post public profiles on the Ordain Women website if they weren’t afraid of ecclesiastical reprisal. One couple I know just had their temple recommend renewal denied for their views on women’s ordination and same-sex marriage. So it’s not entirely fair for the Deseret News to paint the pro-ordination crowd as a tiny minority; there are more of us than the 200-odd participants in October’s walk would suggest. 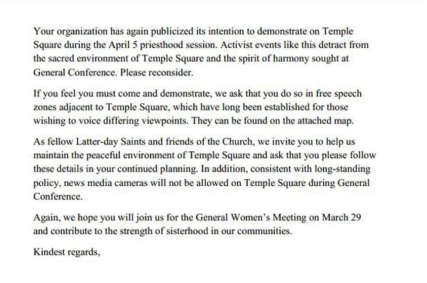 In its response to Ordain Women, the LDS Church has sent a mixed message. On the one hand, Ordain Women is small—minuscule, actually; did we mention what a tiny minority they are? On the other hand, the group is apparently influential enough that its members are detracting from “helpful” discussions about Mormonism and gender, and dangerous enough that they need to be banned from Temple Square.

The real question is: where, exactly, are these “thoughtful discussions” about women’s roles in church allegedly happening?

I certainly hope so.

In other words, the best-case scenario of these “thoughtful discussions” is to leave Mormon women hoping that conversations about their spiritual future are occurring . . . in all-male leadership meetings to which they have no access.

So we blog, and we speak out in unofficial ways about the need for change, since there is such a limit to what we’re allowed to express within institutional channels.

What changes have come are ones that feminists should claim a little credit for. For example, the Church didn’t magically decide after nearly two centuries of its existence that it might be about time to have a woman pray in General Conference; those conversations were prompted by women and men raising the question online and elsewhere at least a year and a half before that historic prayer occurred.

Mormon feminists will continue speaking out in all our variety. Many of us don’t support full ordination for women but seek smaller changes within the existing structure of the Church. Part of the reason that some of those smaller changes have occurred, however, is that it is in the Church’s best interest to show that it is flexible and it is listening: if it can’t accommodate the demands of full ordination, it can at least offer some crumbs from the master’s table.

If Ordain Women is the radical fringe movement that the Deseret News paints it to be, it is a radical fringe that will help to galvanize the middle ground.